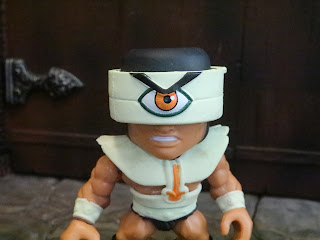 Today for Masters of the Universe Month 2021 we're continuing our journey of looking at how the characters, creatures, and vehicles from the second series of vintage Masters of the Universe toys released in 1983 have been re-imagined in the 37 years since their release. There's a lot of symmetry in Masters of the Universe in general but series 2 really ramped things up by delivering many counterparts for specific Heroic and Evil Warriors. Previously I looked at the MOTU Origins Man-E-Faces so today let's look at his villainous counterpart, Tri-Klops! For Tri-Klops' spot I'm checking out his appearance in The Loyal Subjects Action Vinyls line, particularly the glow in the dark web exclusive version from 2016. Part of a limited run of 750, this is an interesting take on the swordsman who is "Evil and sees everything!" Let's check him out after the break... 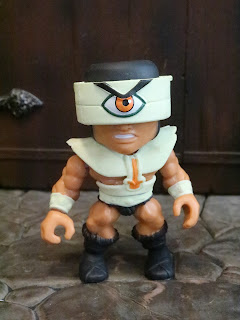 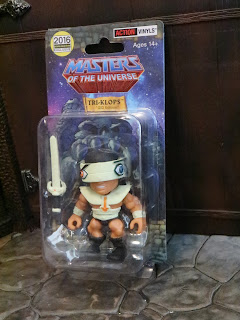 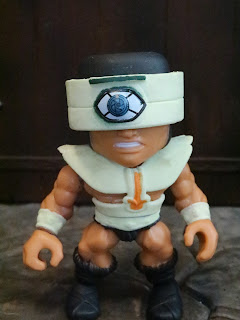 * The Loyal Subjects changed the series 2 figures up a bit as those figures were a bit more articulated and a bit leaner looking with more stylized eyes. The series 1 figures were a bulkier with more unique sculpted parts and less reuse it seemed.This is an interesting looking Tri-Klops as he looks like the vintage styled character but his parts that are usually green and orange are now covered in glow in the dark paint. The armor is a separate piece of his torso, so that's pretty cool and adds some more depth to the figure. Oh, and take notice of Tri-Klops' blue eye... 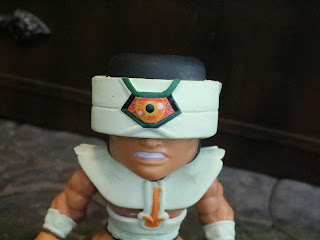 *  Yes, his visor actually rotates! He's not got a different eye that has a pretty cool paint job on it. I love this feature! I never had Tri-Klops as a kid so I was thrilled when I got my first Tri-Klops figure (I think it was the 200x version). But wait, there's more... 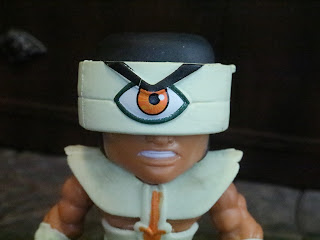 * Yes! He has all three eyes! They have differently shaped eyebrows as well. Groovy! 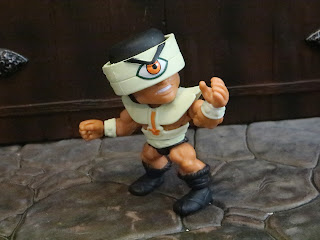 * The first series Action Vinyls don't have as much articulation as the second series of figures but I do like their general design. They still have balljoints at the ankles, hips, waist, shoulders, and head, though the range of motion is still a bit limited. They're definitely designed more for standing around on your shelf or at your desk but they have a very fun presence. Kind of like larger minifigures, really. The shoulder and head articulation is actually pretty good. 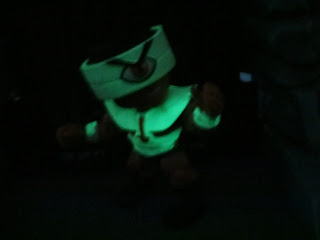 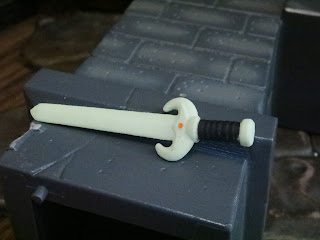 * Tri-Klops only comes with one accessory but it's about all he needs considering the various powers his different eyes give him: It's his sword. Tri-Klops has always been depicted as an excellent swordsman so this is a key weapon for him. It glows in the dark, too! 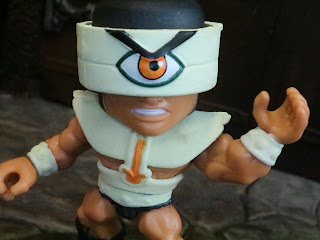 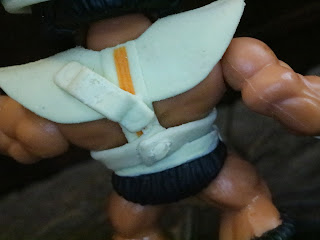 * The gloppiness of the paint continues as it causes the armor and the belt on Tri-Klops' furry trunks to sort of fuse together. Again, this just doesn't feel like something that has the quality of a true production piece. 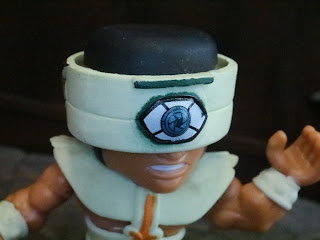 * Isn't it weird how the paint from darker details, like on Tri-Klops' eye here, bleeds over into the glow-in-the-dark paint. What a mess! 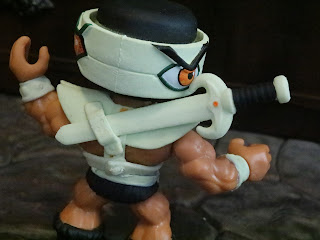 * The paint on his sword and on the loop on his harness is so thick that you can't get his sword in here. Ugh. 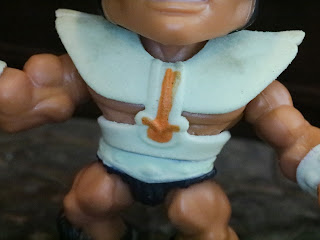 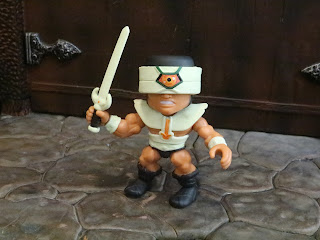 Overall I really like The Loya Subjects' Action Vinyls quite a bit but, man, these glow-in-the-dark exclusives were just really poorly done. Hey, this month I'm covering the good and the bad, what can I say? Sorry that Tri-Klops got the bad as this is a pretty Eh figure. He looks pretty nice when left carded so maybe that's for the best. Tri-Klops is due for a month of his own at some point so leave me a great pun combining Tri-Klops and some month and I just might use it. There are lots of good Tri-Klops toys out there to review, after all.

If you're a Tri-Klops fan I've also reviewed the M.U.S.C.L.E. flesh Tri-Klops and green Tri-Klops, the POP! + Pez Tri-Klops dispenser, the Mega Construx Tri-Klops from the Battle Ram set, and the POP! Tri-Klops #951.