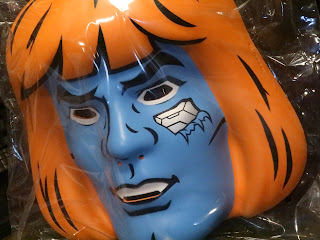 It's time for another review for Masters of the Universe Month 2021 and today we're taking a look at a really cool, random item based on Faker, another member of the 1983 Masters of the Universe cast. I've said a few times that the 1983 line was all about symmetry and that year the line introduced Faker, an evil robotic He-Man wearing Skeletor's chest armor. What fun Faker item are we looking at today? How about this really cool Faker mask from 2018? These were sold as a Mattel SDCC 2018 exclusive in a set along with He-Man, Anti-Eternia He-Man, and Horde Zombie He-man, and I think they were also offered up at PowerCon 2018 as well. Reminiscent of the 1980s' Ben Cooper MOTU Halloween costumes this is actually a foam mask with an adjustable elastic strap. It's kind of a cool item and I love how these masks look displayed on the wall. I'm trying to pick some interesting items from my collection this month as we look at the 1983 MOTU cast over the years and I hope you'll agree that this is a pretty unique item. Join me after the break for a look at the Faker Mask... 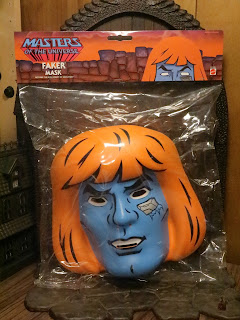 Original Retail Price: $40 for a set of four masks 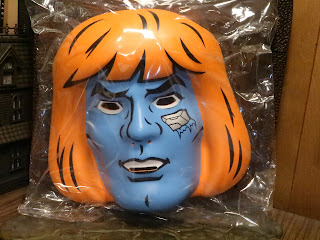 * What you see here is what you get and this is a simple foam Halloween mask of Faker. Mattel used the same "mold" for all four masks in the set so Faker is simply He-Man but with blue skin and orange hair. You know, just like the vintage toy. To make the mask look a bit more interesting they did use black highlights to show off the details that would be easily lost due to the simple colors. It looks pretty cool to me. 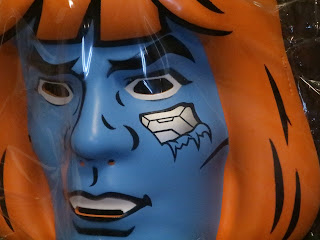 * I love the small patch of ripped away skin under Faker's left eye that shows off his metal endoskeleton underneath. That's a pretty cool detail that makes this version of Faker more interesting than the other masks in the line. 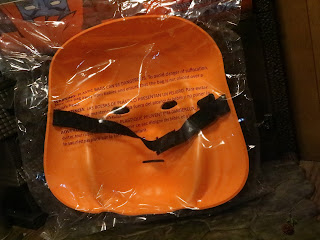 * From the back you can see that the mask is molded from foam rather than cheap plastic like most old school character masks and it has a fairly thick adjustable elastic strap (there's a Velcro fastener in the middle) rather than a simply elastic string. 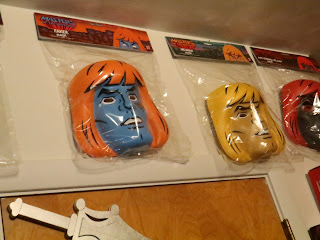 Considering these masks originally only cost about $10 bucks each (you had to buy the set of four) and were an exclusive, they were a pretty cool little bit of swag. Yeah, they seem a bit more like a promotional giveaway in some ways but there is still something really cool and nostalgic about these. Faker might be my favorite mask of the set and I'm giving him a Good and a 1/2. This isn't going to be a must have for most collectors but I've kept mine in the package as I just really like how they look on the shelf.

Are you a fan of the man known as Faker? Then check out my other Faker reviews:  The Mondo exclusive Faker, the M.U.S.C.L.E. Faker from the Series 3 Pack C, the Ultimates He-Man (which came with a Filmation Faker head), the Eternia Minis Faker, the Faker figural bag clip, the Mega Construx Faker, Faker from the Battle for Eternia Collection and Faker from Battle Bones, the Masters of the WWE Universe Faker John Cena, the ReAction Faker and Leo Faker, the Vinyl SODA Faker, and the VYNL Faker.