JuNe Adventures: Optikk from Masters of the Universe Classics by Mattel 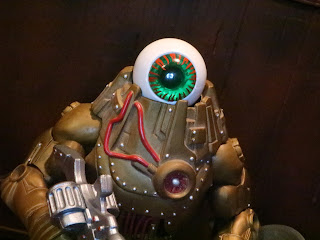 Who should we lay our eyes upon for today's installment of JuNe Adventures? How about Optikk? Released Mattel's Masters of the Universe Classics toyline in May 2010 (yes, it's crazy to think this guy came out over 10 years ago now!) Optikk was the first New Adventures of He-Man era character to make an appearance in that line. Mattel started out very slow with the New Adventures based figures (and, unfortunately, neither Mattel nor Super7 have completed the roster) with Optikk being a way to test the water. He's a crazy looking Evil Space Mutant who definitely represented the best of what New Adventures had to offer. There is no way that anyone but the most die-hard New Adventures haters could resist placing this Evil Mutant Spy in the ranks of their Evil Warriors at the time of his release. Let's take a look at Optikk after the break and see how he fared as an introduction for many fans to the New Adventures toyline... 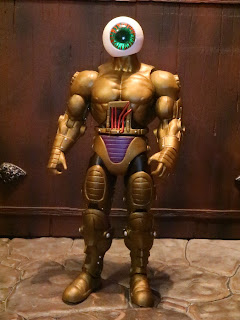 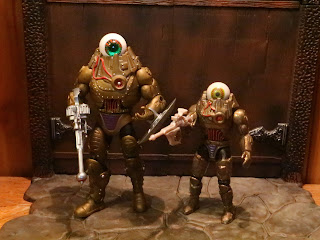 * On the left is the MOTUC Optikk while the vintage He-Man Optikk figure is on the right. Mattel and the Four Horsemen did an excellent job of translating Optikk into the MOTUC style. While Optikk's arms and legs are reused from Trap Jaw they do a decent job of capturing the spirit of the vintage figure even though they're not perfect replications of that toy's design. 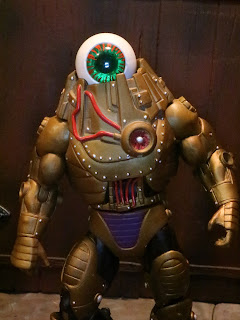 * While MOTUC typically gave us impeccably faithful versions of the vintage figures they took a few liberties with the New Adventures figures, often by reusing the arms and legs from other figures. Trap Jaw's arms and legs were reused quite often for New Adventures figures, as is the case here with Optikk. It looks really good, though, and Optikk has a great bronze color with lots of red and purple details. An armor overlay sits over the standard body which gives his torso its unique appearance. Optikk turned out to be a very impressive figure! 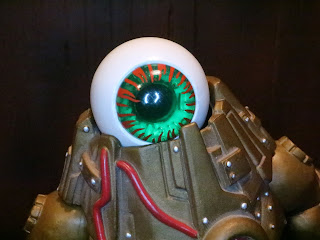 * Part of Optikk's unique appearance is the fact that rather than a face, Optikk's head is simply a giant eyeball. The work on his iris is incredible with lots of red veins and a translucent covering over the pupil. It looks phenomenal! Optikk comes with two "heads" and this one with the green iris is designed to match the colors of the vintage toy. 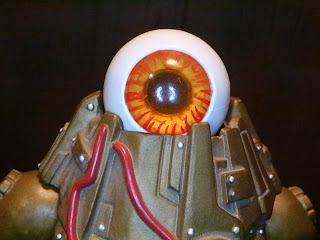 * The second "head" features an orange iris and it's based on the "cross sell" art of the vintage toy (that's the art used on the back of the card to show off all of the other toys in the line). The heads swap easily and give you the ability to swap up your display a bit more. 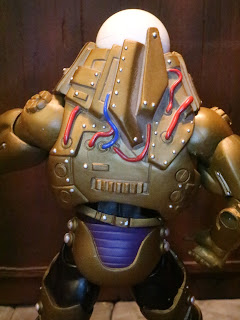 * Here's a glimpse at the back of the figure, allowing you to see Optikk's armor overlay. You can see even more of the excellent sculpted detail from the Four Horsemen including the gear on Optikk's lower back. It's just a part of the armor here but on the vintage toy it turned Optikk's eye back and forth when it was moved. * Optikk's articulation was standard for the line and, overall, it was pretty good. His torso can't move much due to his armor but everything else moves just like you'd expect. Mattel largely kept the same articulation scheme for these figures from 2008 through around 2016 and the figures were nearly always durable and fun to play with. 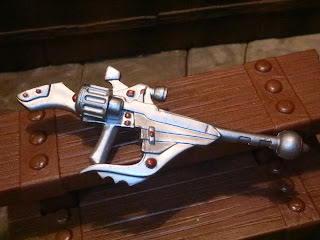 * Optikk comes with two weapons, the first of which is his photon neutralizer. This is the weapon that was included with the vintage Optikk toy and it has been faithfully translated but also given some impressive paint applications. This is a very cool looking space rifle! 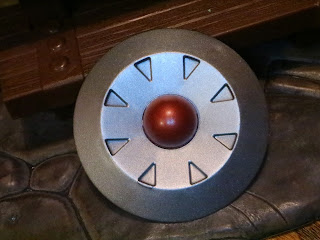 * Optikk's new weapon is a shield that has a bit of an eyeball theme to it. It's round and has a red pupil-like orb in the middle. Doesn't that look like it could be a eyeball? It easily snaps over his wrist and gives Optikk another weapon for his arsenal, which is always appreciated. 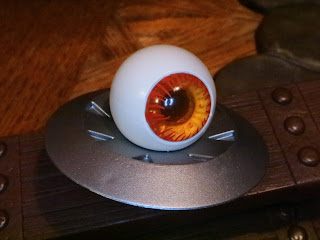 * The shield has one other feature and I'm not sure where I first saw this (I don't believe it was marketed as a selling point) but you can actually place either of Optikk's "heads" onto the orb in the center of the shield. The fit is too perfect not to be intentional! Now Optikk's shield can function as some sort of spy device as well, which is fitting as Optikk was billed as the "Space Mutant Spy for Skeletor." 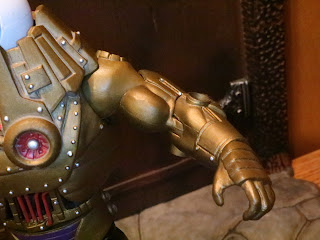 * Optikk's arms are kind of loose. They're not complete windmills or anything but they do flop around a bit. They're actually removable like Trap Jaw's arms but they just don't seem to feel as sturdy. 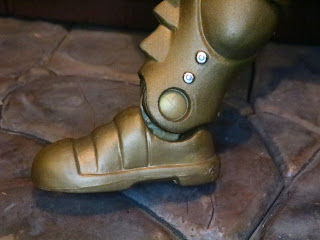 * Optikk has some loose ankle joints. This was a fairly common defect in the early years of the MOTUC line and Optikk suffers from it, too. 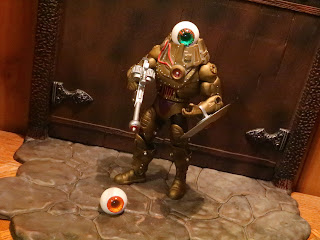 The release of Optikk in the Masters of the Universe Classics line back in May of 2010 was pretty exciting. While Mattel didn't yet have rights to the Filmation cartoon series or the movie based figures (which Super7 would acquire in a roundabout way), adding a New Adventures character into the line truly showed that Mattel was drawing from all of the toyline eras of MOTU. While his articulation has some flaws, he's still a Great figure and a member of the Evil Space Mutants who really catches your eye on the toy shelf. MOTUC is only 4 evil mutants away from completing the vintage roster (not including variants) and it would be amazing to see Mattel (or Super7, if they get the rights back) someday release the rest of them. I'd love to have Staghorn, Hoove, Butthead, and Lizorr to complete the Evil Space Mutants in Masters of the Universe Classics!