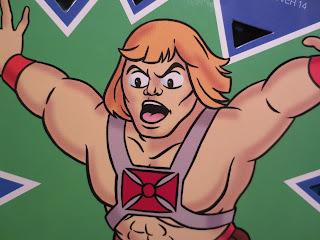 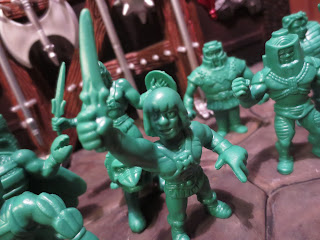 Height: Between 1 and 2 inches tall 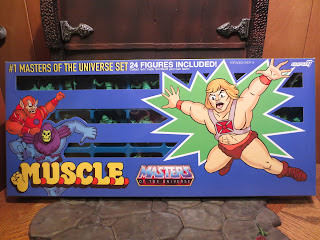 * The box these guys come in is insanely cool! Not only does it look and feel like the old M.U.S.C.L.E. 28 packs from back in the 1980s but the inner plastic tray makes for a great way to store or display the figures. This might just be my favorite packaging on a toy yet this year. 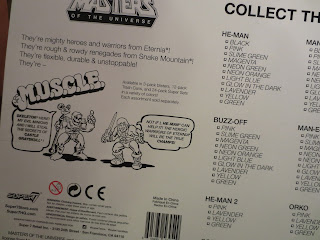 * Don't you love the little cartoon on the back? It really is just like the back of an old school M.U.S.C.L.E. package. There's also a nice checklist, too, so you can check off all of the different figures and color schemes you manage to track down. 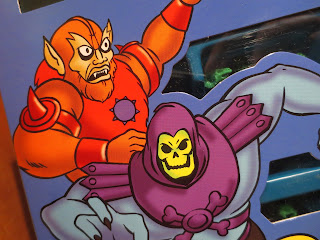 * Don't you just love the art on the box? Super7 really tried to capture the look of a vintage M.U.S.C.L.E. package and I think they did a darn fine job here. I cannot wait to see what else they release in this line! 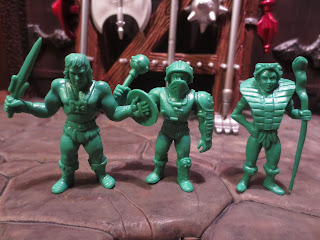 * Last year at SDCC 2015 twelve sculpts were introduced in this line. At the time they were referred to as M.O.T.U.S.C.L.E. but now they're simply called M.U.S.C.L.E. Masters of the Universe. Those twelve original sculpts are included in the new 24 packs and the first three are He-Man, Teela, & Man-At-Arms. Since I reviewed these in-depth last year, go back and read those reviews for more detailed thoughts. 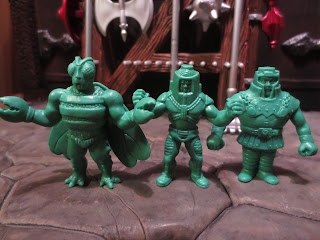 * Here are Ram Man, Buzz-Off, & Man-E-Faces. Again, these are figures I reviewed back in series 1 but now we get them here in a nice green plastic. These box sets come in two colors, green and yellow, although each set has the same 24 figures in it. I picked green as I thought the majority of the figures would look better and photograph better with that color. Also, since you get a Castle Grayskull and Battle Cat figure here, green just seemed like a better choice. 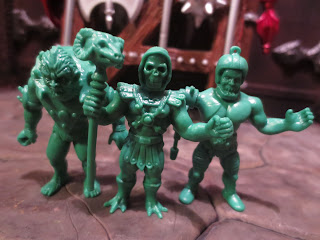 * The third set of series 1 figures is Skeletor, Beast Man, & Trap Jaw. One of the best thing about these new castings is that the plastic is much hardier. The original series 1 releases were almost gummy feeling. These guys feel more like traditional M.U.S.C.L.E. figures, however, and that's a big plus in my book. 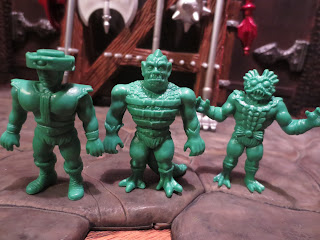 * And here's the last set of series 1 reissues consisting of Whiplash, Tri-Klops, & Mer-Man.
Series 1 had a nice roster of strong characters, so let's see what series 2 has to add to that! 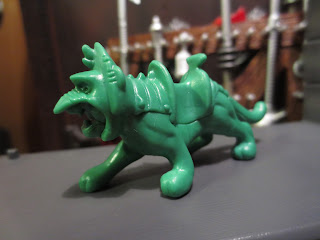 * Battle Cat is the first of the twelve new figures from Series 2 and he's a really cool, unexpected addition to the line. I love the idea of Super7 creating beasts and possibly even smaller vehicles for the line. Battle Cat is a dead ringer for the vintage version of the character and is further enhanced by the green plastic he's molded in. 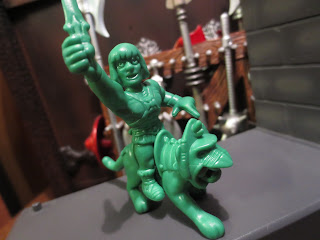 * One of the coolest things about Battle Cat is that other figures can actually ride him. His saddle is sculpted so that the legs of other M.U.S.C.L.E. figures can slip right over him. It's a really cool feature and a unique idea so far as minifigures go. 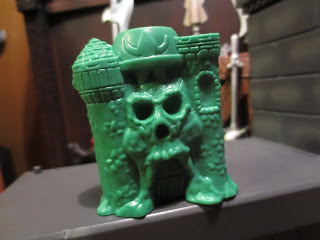 * Another really cool minifigure in series 2 is Castle Grayskull. Yup, just a miniature version of Castle Grayskull molded in green rubbery plastic. It's amazing! Look how cool and fierce this thing is even at such a tiny height. 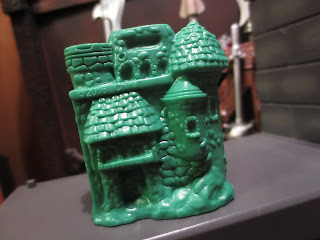 * Flip Castle Grayskull around and you can see that the full castle is rendered here. I love how accurate this is to the vintage toy! It's really a pretty cool minifigure as well as a fun piece for dioramas and displays. Want to have out Skeletor shrink and steal Castle Grayskull? Done! Want Deadpool to have a Castle Grayskull playset in his bedroom? You've got it, dude. 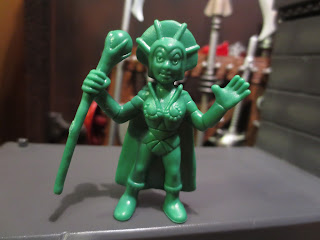 * Evil Lyn has her staff, a spell casting left hand, a pretty good outfit design, and a cape. Not bad! But wait...What's up with her face? She looks really happy and smiley. Is something wrong? She looks like she's from a completely different line than the first series of minifigures. 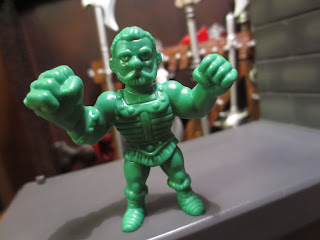 * It's pretty cool to get Fisto, but he's also a bit odd looking. Their is definitely a more chibi inspired design here and you can see it in Fisto's larger hands (even his regular, not metal hand is larger) and his exaggerated facial features. The bands on his metal chest armor look pretty good, though. 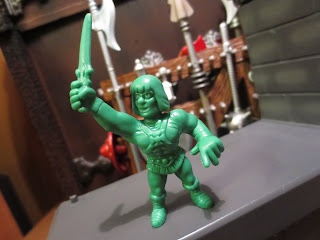 * The first figure from series 2 that is a variant of a series 1 character is He-Man. He-Man version 2 has the more muscular, more cartoonish look that other series 2 humans have and, for me, the results are mixed. I like the bulkier body but I'm not sold on the somewhat goofy face. It's so different from the previous style and it makes me think of the artwork of Sergio Aragones. 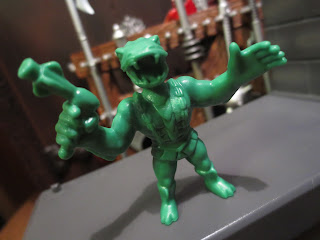 * Kobra Khan looks awesome, though, and might be one of the best series 2 figures. I love the detail on his chest as well as the fact that he's carrying his unique pistol! The headsculpt is really good, particularly the four sharp fans and the open mouth. 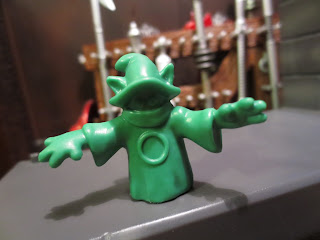 * I love that Orko got a minifigure here! The pose is right and he's appropriately smaller than the rest of the figures in the line. I do wish he were floating, though. Having him come with some sort of base, perhaps like a burst of energy, would have greatly improved him. I'm digging the sculpted "O" on his shirt, though. It looks pretty slick. 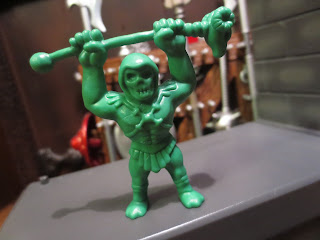 * Like He-Man, Skeletor also gets a resculpt in series two. Skeletor fares better than He-Man as he looks bigger and bulkier than his predecessor and has a cool pose with his Havoc Staff raised above his head. The more stylized design looks better on characters with non-human faces like Skeletor (well, without traditional human faces at least) and Skeletor doesn't look half bad here. 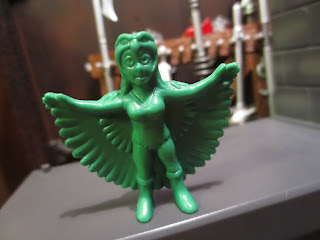 * The Sorceress has a great pose and nice detail in her wings and headdress. Unfortunately, she falls victim to the new series 2 style by having a rather silly face. Again, I'm just not loving this new style, especially on the normal human appearing characters. 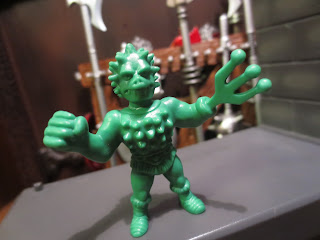 * Spikor looks wicked and I think the new harder plastic really does him quite a few favors. Don't you just love the nubby spikes on his chest and the more pointy spikes on his head? These actually feel kind of sharp! I'm digging the trident on his arm, too. I wonder why Super7 leaves weapons such as Spikor's mace off of certain figures, though. 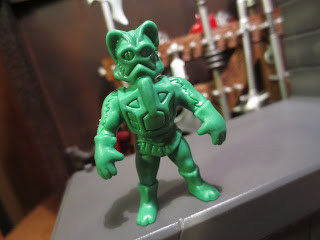 * While the vintage Stinkor utilized Mer-Man's head, this Stinkor looks quite different than the M.U.S.C.L.E. Mer-Man. Not only does he have a unique look to his face and his classic armor but he also has some sculpted "skunk stripes" on his arms. 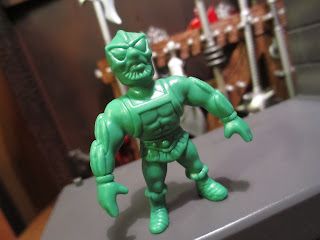 * It's nice to see Stratos included as part of this set. The new style of the second series doesn't look too bad on him, probably due to the fact that most of his face is covered by goggles and a beard. He does have wings sculpted on his arms as well as a jetpack on his back. 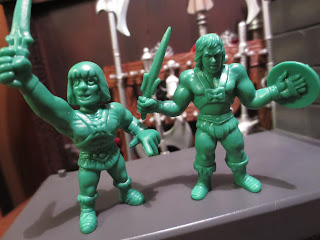 * The strangest thing about series 2 is definitely the odd change in style.While the series one figures have a more realistic art style, the series 2 figures are shorter with bulkier proportions and more cartoon-like faces. I'm not sure why Super 7 made this change; perhaps it's due to the fact that they do indeed have the M.U.S.C.L.E. license now and they want the figures to look s much like classic M.U.S.C.L.E. figures as possible. I like most of the series 2 figures but the more traditional human figures are a bit hit or miss in my eyes. 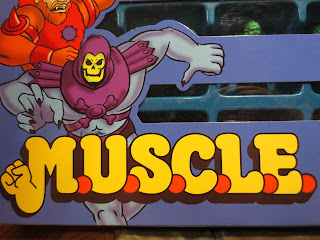 I really like this set. For the $45 bucks Super 7 is asking you're getting 24 figures, which works out to less than $2 a minifigure. That's quite a deal. The plastic quality is improved, the packaging and artwork is amazing, and the inclusion of pieces like Orko, Battle Cat, and Castle Grayskull adds so much fun to the set. Unfortunately, I'm not wild about the change in style for most figures in series 2. Why do this? Were people really asking for this? I can understand the shorter, more muscular bodies but why give us such odd-looking heads? This set is still a Great and a 1/2 set but I hope that Super 7 goes back and tries to reach a middle ground between the series 1 and series 2 sculpts. Keep the newer proportions but lose the ridiculous faces, please.


If you're interested in seeing more of these I've reviewed all of the M.O.T.U.S.C.L.E. packs from last year, including: