Action Figure Review: Land Shark from Masters of the Universe Origins by Mattel 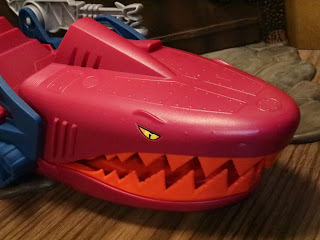 Mattel is really pumping out Masters of the Universe Origins product in 2021 and one of the coolest items that's come out so far is a remake of the Land Shark. Based on the original 1985 vehicle, the Land Shark isn't too different from the original toy at all. It's a little larger, a little brighter, and it has fewer separate pieces than the vintage toy but otherwise it's quite similar. The Land Shark is my favorite of the vintage vehicles (I think; I really like the Roton, too) and I'm thrilled to get it this early in the line. The other good thing about the Origins Land Shark is that it works pretty well with Masters of the Universe Classics, too. Ready to take a spin in the Land Shark? Then join me after the break... 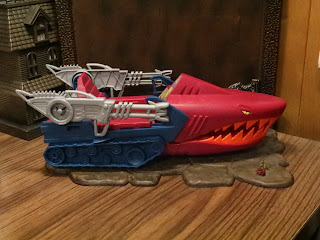 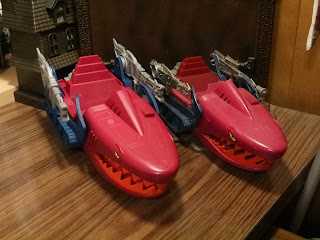 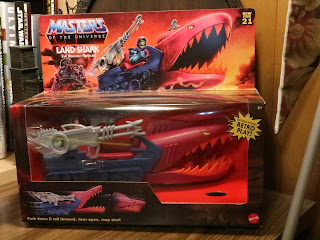 * The Packaging on the larger pieces in the MOTU Origins line has been incredible and the Land Shark might have the best packaging yet! Not only is the old-school window box topped with a beautiful depiction of Skeletor driving the vehicle just aesthetically amazing but the side panels have images of various creatures we haven't yet scene in the line. 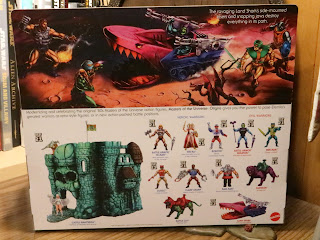 * Here's a shot of the back which shows off the series 3 figures, the deluxe figures, the cats, and Castle Grayskull. 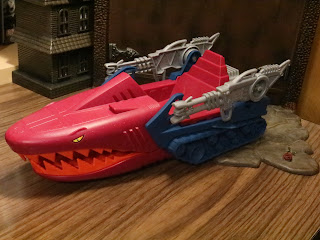 * Considering that getting a vehicle in a toyline is fairly uncommon these days just having a Land Shark this big is pretty cool. It's a good quality piece and while it's a bit more "toy" than collector's piece, it's still fairly large and impressive. While the Origins figures aren't really larger than the vintage toys (the articulation allows them to stand up rather than remain in a battle crouch like the vintage line) the Land Shark is a good bit larger than the vintage toy. 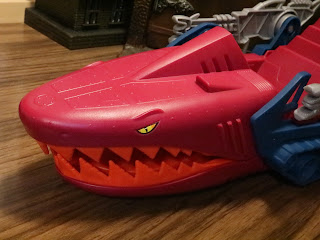 * The most iconic feature of the Land Shark is the shark themed front of the vehicle. The detail is very similar to the vintage toy but the teeth are more detailed and the eyes look really piercing. This thing is amazing in the most nonsensical way you could imagine a vehicle designed for combat to be. The packaging has always implied that the Land Shark is both a monster and a vehicle, so take that how you will. 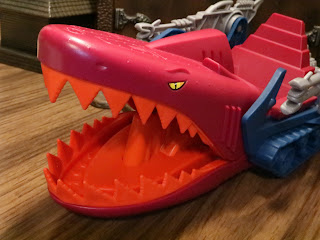 * The vintage toy's mouth opened by pressing a switch but the Origins version of Land Shark opens when you roll it. There are two rolling axles on the bottom (four wheels in all) and the front axle, when rolled, causes the Land Shark's mouth to open and close. It's really pretty cool! There are actually some sculpted blades and rivets inside of the Land Shark's mouth, too, which is another upgrade this version gets. 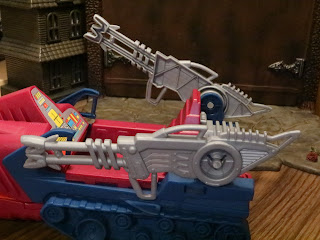 * The Land Shark doesn't just bite! It also has two massive cannons mounted on the sides. They can pivot up and down to allow for a better firing angle. One of these cannons comes loose in the package (as does one of the treads) and you have to snap them together. They're a one-time assembly piece, though, so don't try to take them apart. 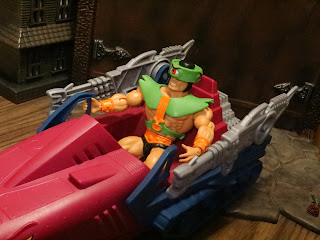 * The cockpit of the Land Shark is fairly roomy and holds most of the Origins figures with ease. Tri-Klops looks pretty comfy in here, doesn't he? 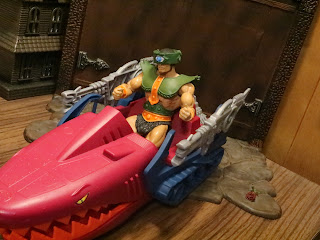 * Even better yes, a Masters of the Universe Classics figure can fit inside the Land Shark. It's not perfect due to the space under the hood where the legs go being a bit tight but you can get a figure inside of here. I have to wonder if Mattel released the Land Shark so early knowing that MOTUC collectors would probably bite on this one as well since the Land Shark never made it into MOTUC. Considering Land Shark and Roton are my two favorite vehicles, I'm thrilled to have a version of each now to display with my MOTUC line, which is my favorite toyline of all time. 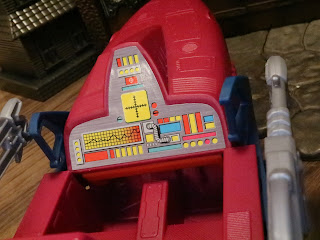 * Rather than sculpting the control panel like we would have seen on a Masters of the Universe Classics Land Shark the Origins vehicle gets a simple sticker. It's OK. It's bright and colorful and on par with the vintage toy. 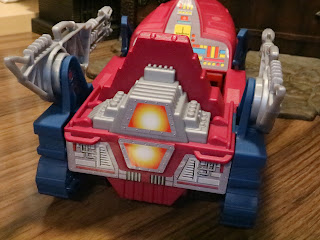 * The back of the Land Shark doesn't have the removable seat back or the removable engine cover like the vintage toy but the colors are quite nice and the stickers look good. They're pretty cleanly applied, too, so that's a big plus. 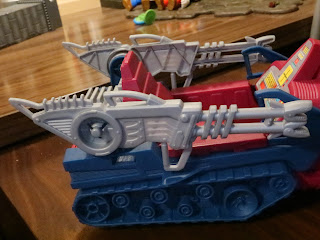 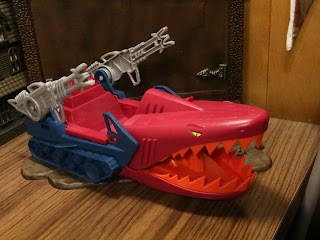 I'm really happy with this Land Shark. It's a nice update of the vintage toy and while it's not really an improvement over the vintage toy, it's probably equally as good. The adjusted size is nice, though, and it definitely makes it more fitting for MOTUC figures. MOTUC collectors have a massive line of toys and I think Mattel would be smart to consider ways to allow fans to still augment that line even while they're releasing new lines. Personally, I think the Land Shark works as well with MOTUC as it does with Origins and that's an Epic thing in my book. Considering how much vehicles targeted at collectors cost these days being able to pick this one up for $30 bucks is a deal.

Do you also love the Land Shark? Then check out my review of the Hot Wheels Premium Land Shark, too!