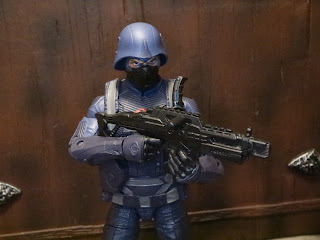 If you want to talk about the best action figure line on the market today that's the most frustrating to collect then it's definitely G.I. Joe: The Classified Series. So far the Target exclusive Special Missions: Cobra Island figures have been just too darn hard to find. Last year's Cobra Trooper was a Target exclusive army builder released in limited numbers during a pandemic. That made for a perfect storm of troubles in trying to acquire the figure. Fortunately, Hasbro has released a very similar Cobra Infantry figure which is easier to find and could be preordered from most e-tailers and Hasbro Pulse. Mine was actually found on a shelf at a Walmart which is becoming a less common occurrence these days. The Cobra Infantry is a repaint of last year's Cobra Trooper with fewer accessories. How does he stack up compared to last year's release? Find out after the break... 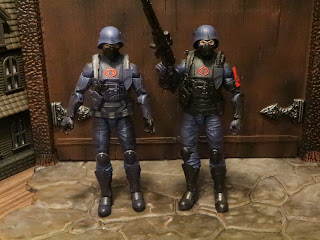 * The Cobra Infantry is on the left while the Cobra Trooper is on the right. What's different? The Cobra Infantry has a darker skin tone visible through his balaclava, more detailed paintwork on his outfit, and fewer accessories. He's still a really good figure and I thin the painted details make him preferable to the Cobra Trooper but the missing weapons are definitely a bummer. 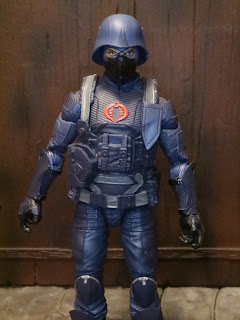 The Positives:
* The Cobra Infantry is just as nicely sculpted as the Cobra Trooper but now he's sporting some more blue and gray and less black on his harness and vest. There are more paint applications and colors here in order to offer up something that stands out a bit more. The Cobra Infantry design also seems to pay homage to the Cobra troopers from the animated series. 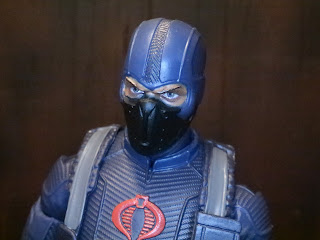 * The headsculpt is wicked fierce, just like last time. Most of his head is covered by a balaclava with an armored face mask that probably serves as a filter as well. The part of the Cobra Infantry that is visible shows a much darker skin tone than the target exclusive Cobra Trooper so you can add a bit of diversity to your ranks. 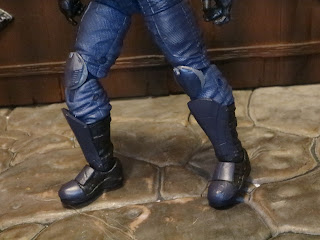 * The Cobra Infantry is really equipped nicely. I love the armored plating over his boots and shins and his sleek, angular knee pads. He's both looking sharp and geared up for battle. 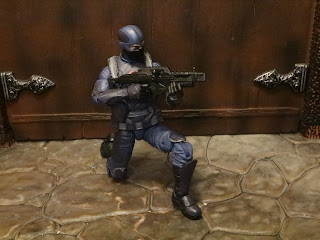 * The articulation on this series has been killer all around and the Cobra Infantry is just as good as the Cobra Trooper was. He moves really well with my only issue being that the position of his chest holster interferes with his arm movement. Overall, though, he's a joy to play with. 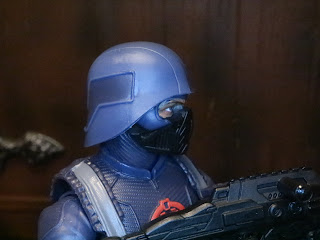 *  The Cobra Infantry comes with the classic blue Cobra helmet. It's a bit more detailed than any previous version but it looks just like you'd expect. It also fits very securely on the trooper's head. I love that the the figure looks great both with or without the helmet. 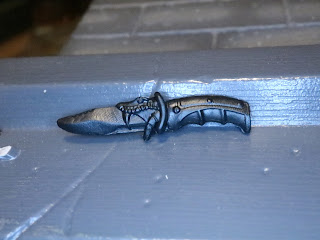 * The knife is still incredible. I love how the blade looks like it is coming out of the mouth of the snake adorning the hilt. You just know Cobra Commander loves stuff like that. 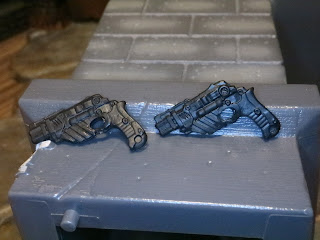 * The Cobra Infantry has the same two pistols as the Cobra Trooper and the same two holsters on his tactical vest, one in the front and one in the rear, to store them in. These are pretty cool looking pistols. They're still a bit futuristic but they don't look too far out. They appear to be modeled on the Nerf Vortex Proton blasters. The detail is crisp and they look excellent with the figure. 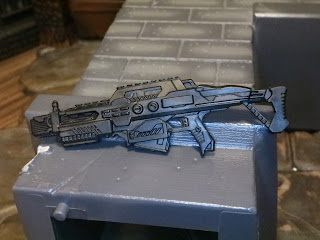 * The Cobra Infantry's primary weapon is what looks like an assault rifle. It's a really cool looking weapon with a discernible magazine. It actually seems to be modeled after the Nerf Rapidstrike. 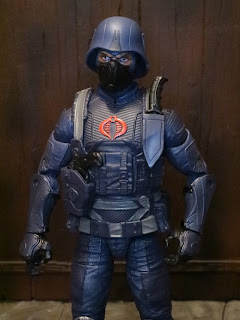 * The Cobra Infantry accomplishes one of my favorite action figure feats: He can carry all of his weapons and still have his hands free! One of his pistols fits in the holster on his right and the snake knife fits in the sheathe on his left shoulder. 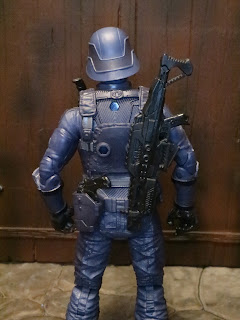 * The second pistol fits in the holster on the Cobra Trooper's left lower back while the rifle plugs into one of the two ports on his back. Voila! Pretty cool, right? 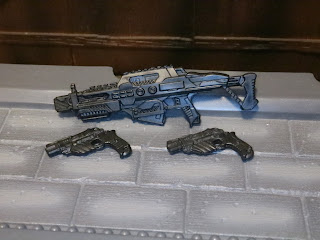 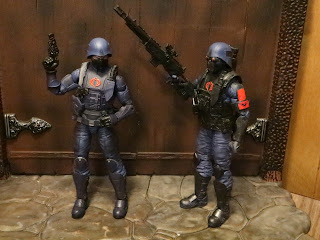 * I'm a bit perplexed as to why Hasbro gave the Cobra Infantry three fewer accessories than the standard figure. They already gave him a different name and a different paintjob. Wasn't that enough? Considering how limited the Cobra Trooper was it seems kind of odd to drop these extras. I could see if they had maybe taken away one of the extras but three seems to be just a jerk move. I'm sure we'll see the accessories again with other figures down the road but still it seems like a poor move for a figure released less than a year later for the same price. 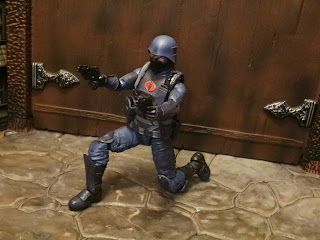 The Cobra Infantry is still a really, really good figure and I actually like the color of his gear better than the Cobra Trooper. It's frustrating, though, that the army builder that's actually available to collectors comes with less stuff. The Cobra Trooper had lots of display options: Two rifles, goggles on or off, the shoulder pauldron, and a helmet on or off. The Cobra Infantry only has one of those options (helmet on or off) so you're much more limited if you're trying to army build these guys. Again, still a really good figure but I don't understand Hasbro's logic in shorting this guy so many accessories. He's a Great and a 1/2 but the extra weapons and gear still give the Cobra Trooper the edge. I imagine that we'll see this figure released over and over again in the years to come (assuming the line lasts that long) so we'll probably have multiple different troops to work with, but for now things are pretty limited and Hasbro killed the versatility of this figure.
Looking for more Cobra minions? The only other one I've reviewed so far is the Classified Series Cobra Trooper.
For more G.I. Joe Classified Series reviews check out the following:
Arctic Mission Storm Shadow
Baroness with Cobra C.O.I.L.
Cobra Commander
Cobra Commander (Regal Variant)
Cobra Trooper (Special Missions: Cobra Island)
Cobra Viper
Destro
Duke
Firefly
Gung Ho
Profit Director Destro
Red Ninja
Roadblock
Roadblock (Special Missions: Cobra Island)
Scarlett
Snake Eyes
Snake Eyes Deluxe
Wayne "Beach Head" Sneeden