Ferociously Furry February: Grizzlor from Masters of the Universe Classics by Mattel 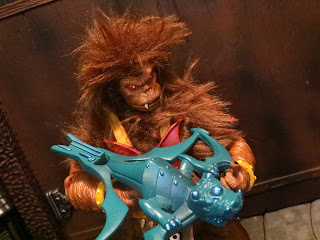 One of my favorite things about the Masters of the Universe theme months is that I get the opportunity to go back and revisit some of the Masters of the Universe Classics toys that I never got the chance to review! I didn't start regularly reviewing toys until early 2013 back when I started reviewing on The Epic Review (all of those reviews have since migrated over here to Action Figure Barbecue) which was already about 5 years in to Masters of the Universe Classics, so I never got the chance to do a full review of Grizzlor. Grizzlor was released in November 2010 as the monthly subscription figure and he was a pretty popular figure. Besides being a an excellent figure of one of the most popular members of the Evil Horde, the MOTUC Grizzlor also has a claim to fame as a figure who was shown with an alternate 200x inspired faceplate in an issue of Toy Fare magazine that the figure didn't end up coming with. The details are covered in this review of the 2015 Heads of Eternia pack which included the missing head, so check that out for the full scoop. For now, let's leap into this review of the Masters of the Universe Classics Grizzlor for Ferociously Furry february... 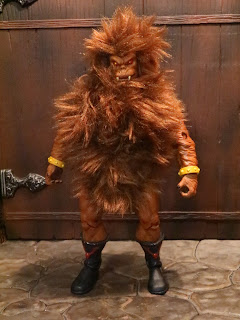 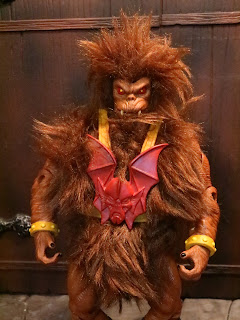 The Positives:
* Mattel and the Four Horsemen did a seriously incredible job of translating the vintage Grizzlor figure into the MOTUC line. Grizzlor still looks wild, wooly, and incredibly terrifying! Most of the figure reuses parts from Beast Man with the torso covered by a furry bodysuit. Since the Beast Man arms are used here Grizzlor does have yellow bracers, something the vintage figure didn't have, but I really like the look of them here. They definitely go with his aesthetic. He's sporting the oversized Horde harness, too. It's a removable piece but the figure looks much nicer with it on. 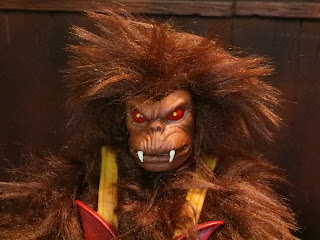 * Grizzlor's headsculpt is an excellent update of the vintage toy. Crisper detail, more intimidating eyes, and just overall better proportions make this such a cool looking version of Grizzlor that captures his wild, almost mythical appearance. He's got hair on his head, too, and you can actually style it a bit to get the look that you want. 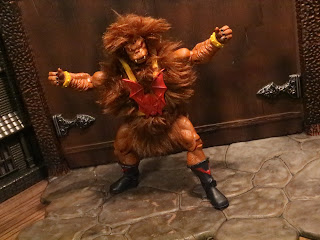 * While much of the torso is restricted by the furry suit that covers it, overall Grizzlor has the same articulation as most any other MOTUC figure. While there are some outdated elements compared to something released today, these were still widly fun and wonderfully articulated figures. They're sturdy and tons of fun to pick up and play with. Grizzlor looks great in a variety of poses especially when wiedling his arsenal of weapons. 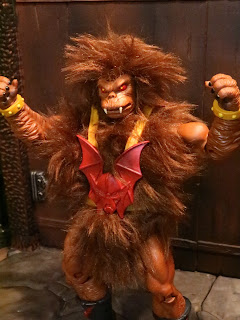 * While most MOTUC figures didn't include action figures per say, we still got some of the features that made the original line stand out. Grizzlor definitely has really fur and it's quite nice. I love the color (it's a bit darker in hand than in my pictures) and it can be brushed about quite nicely. You could probably work at it with a comb or something to make Grizzlor look a bit more neat and groomed or you can go wild and make him look crazy like the crazy urban legend Buzz-Off used to scare everyone around a campfire in the vintage minicomic. 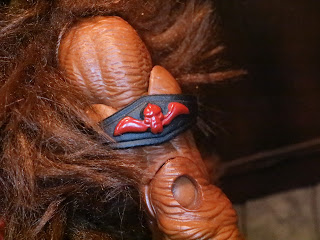 * Grizzlor has a removable arm band tat fits over his left bicep which shows off his allegiance to the Horde. 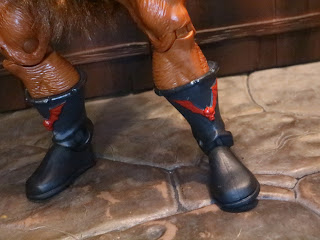 * He's also sporting some Horde logo adorned boots. That way you know it's the Horde's doing when Grizzlor stomps a hole in you. 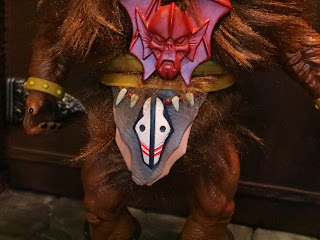 * While Mattel never released a Grizzlor during the 200x years, the Mike Young Productions cartoon and the NECA Stactions did feature the Four Horseman's wicked cool Grizzlor that reimagined the character as a well equipped hunter rather that as just a wild man. One of the biggest differences on the Staction design was the very cool loincloth. It has a really cool design and multiple paint apps that add some color to Grizzlor. It's an extra piece so vintage purists don't have to use it but for those of us who liked MOTUC being a celebration of the best of the old and the best of the new, this was a cool addition. 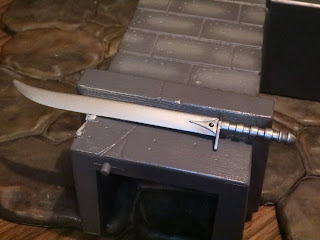 * Speaking of the 200x Staction, that version of Grizzlor was loaded with weapons. The vintage figure just had one of those doofy crossbows that all of the Horde had but the 200x line was loaded with blades. First up is a sword that gives Grizzlor some additional steel and some reach for his attacks. 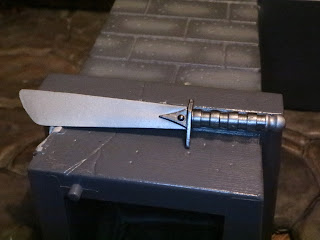 * Next up is a really cool machete styled blade. I personally like this one better than the sword as Grizzlor seems like an up close and personal kind of fellow. This looks amazing in his hands! 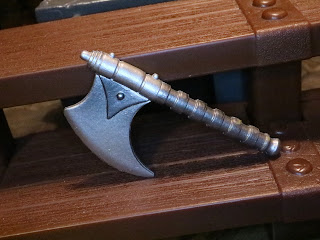 * Grizzlor's third melee weapon is my favorite: A smaller, one handed bearded axe! Grizzlor looks epic swinging this thing around at the enemies of the Evil Horde and it definitely ups his ferocity level to the extreme. 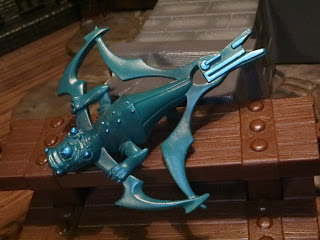 * I've never cared for the crossbows from the vintage MOTU Horde Members but the redesigned crossbows for MOTUC are excellent. They looks much cooler and you can actually see a bolt sticking out of the creature's mouth on the front of the crossbow. Grizzlor's bow is unique and has a one-eyed creature on the front. It's given a metallic, bluish green paint job that really just makes this stand out, too. 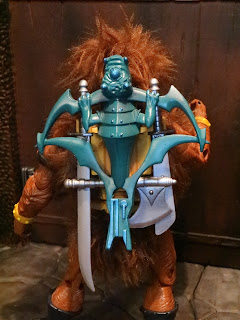 * Guess what else Grizzlor can do? He can hold all of his weapons on his back! I love when a figure can tote around all of their gear and Grizzlor looks awesome with a loaded pack of nasty weapons. This is a tribute to the Staction as Grizzlor carried all of his weapons on that figure. The weapons rack is removable in case you want a straight up vintage Grizzlor but who could turn this awesomeness down? The swords fit on the sides, the ax fits in a grip on the bottom, and there is a slot for the crossbow handle to fit inside. Groovy. 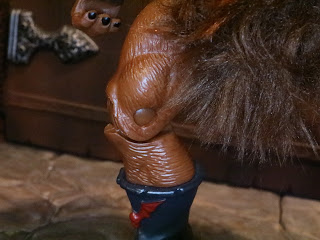 The Negative:
* Some of the earlier MOTUC figures had some loose limbs and, unfortunately, Grizzlor has always had looser knees. Not super "fall over when you look at him" loose but definitely "you'll need to mess with him a bit when you try to pose him" loose. 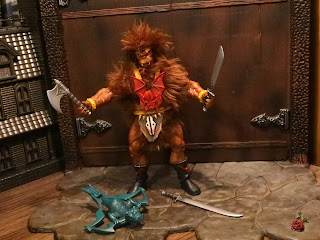 It's no secret that Grizzlor is one of my favorite MOTU characters and I've always felt that Grizzlor was one of the best MOTUC figures release. He's a great translation of the vintage figure with a few new details, a replicated "action feature" that doesn't detract from the figure, and a plethora of weapons and extras from both the vintage line and the 200x era. Grizzlor is Epic and he was definitely one of my favorites of 2010, a year that was loaded with great releases. 2011 was the first year I had a subscription to MOTUC so I had to scramble to get Grizzlor but it was worth it. Still one of the greats from the greatest toyline of them all!

For more Masters of the Universe Classics reviews from Mattel's run, check out the following: