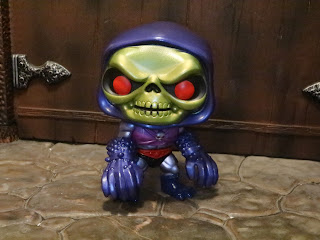 Earlier this year Funko released the standard Terror Claws Skeletor in the POP! Retro Toys line and shortly afterwards they also released a Target exclusive metallic version of the same figure. Oddly enough, this guy wasn't that tough to find. Lately Target has been an anathema when it comes to exclusives but I managed to snag this one on their website while it was on sale. That was fortuitous, don't you think? It's the same sculpt as the standard Terror Claws Skeletor POP! but now he has a shiny, metallic paint job. You know, just like the Hot Topic exclusive keychain. Ready for a second round with Terror Claws Skeletor? Then join me after the break... 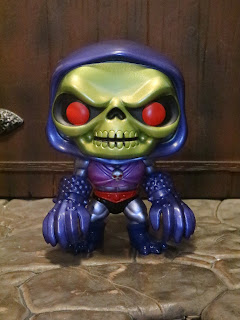 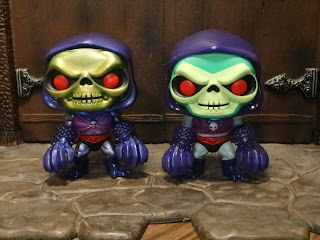 Comparison:
* The metallic Terror Claws Skeletor is on the left while the standard Terror Claws Skeletor #39 is on the right. What's different? Just the paint. The Target exclusive has darker colors, a shiny "metallic" paint job, and solid gold skull rather than the yellow and green skull of the vintage toy. The teeth look pretty awesome on the gold face, too. They just seem more menacing than on the standard figure. 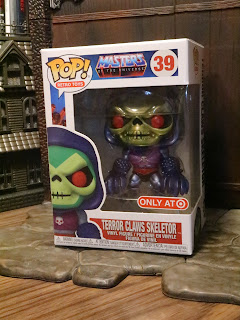 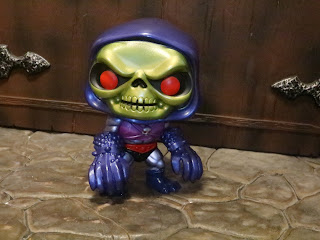 The Positives:
* Terror Claws Skeletor is posed in a fairly neutral stance with his massive claws just hanging on each side of his body. Like nearly every other POP! vinyl out there he has a swivel head so you can have him looking around a bit on your shelf 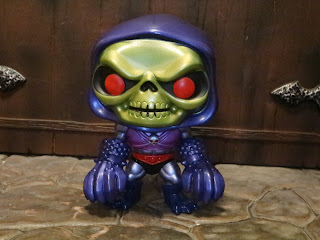 * Funko did a good job capturing Skeletor's vintage Terror Claws look. Some folks refer to his half armor as a sports bra but here it definitely looks like it covers more of his torso than the vintage figure did. There's even the little skull in the middle of his armor and they got the color of his belt right (this version of Skelly has a red belt with black trunks). The metallic looks is quite nice and definitely makes this guy even cooler than the standard figure. 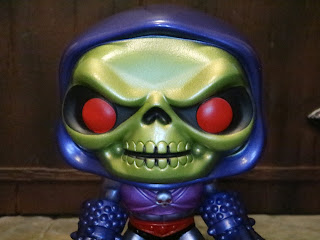 * The skull is a greenish gold and it really makes the eyes pop! Seriously, this is a wicked looking Skeletor. I love the effect on this guy. One of the best Skeletor POP! faces out there. 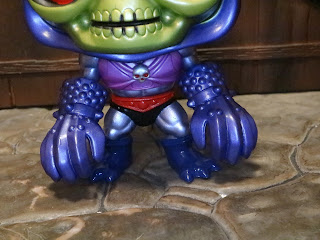 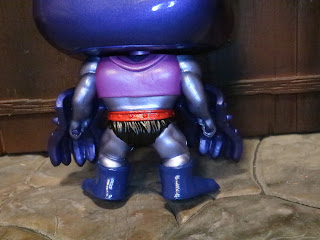 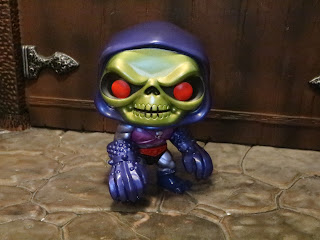