It's Friday and you know what that means... It's time for this week's installment of Barbecue's Bonfire! It's been a great week (Masters of the Universe Day always makes for a memorable experience) and it's time to talk about it. Let's start by looking at the final episode of The Falcon and The Winter Soldier! 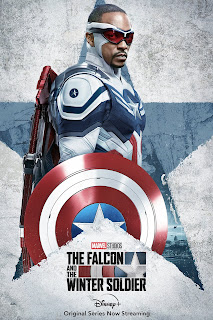 Did this show end on a high note or what? The second Disney+ MCU show is another fantastic installment in the MCU and I'm still wrestling with whether or not I liked it more than WandaVision there's no doubt that it was the more significant and meaningful show. TFATWS was a thoughtful and timely take on issues being faced by both the United States and the entire planet such as radicalism, equality, jingoism, unchecked power, and race that still managed to be a fun, exciting superhero experience. Anthony Mackie definitely has proven himself worthy of the shield and delivers an excellent monologue at the end of the episode. Between that, Bucky's final steps in closing his book on the Winter Soldier, and Sam's trip with Isaiah Bradley to the Captain America exhibit, this episode stands out as one of the finest moments in the MCU The episode is nearly one long action scene until the end and most of the major players get a chance to shine and, in some ways, to redeem themselves. There's a lot of loose ends left intentionally which gets me all the more excited for the upcoming Captain America 4. I was hoping that Bucky would take up the title of White Wolf after making amends with those he hurt and laying the legacy of  the Winter Soldier to rest but maybe that will be saved for Captain America 4 along with Sharon Carter's continued role as the power broker and John Walker as the U.S. Agent. The end title card proclaiming the show as Captain America an the Winter Soldier was just too cool and really sealed the deal. Steve chose his successor well and it will be exciting to see what's in store for Sam Wilson as Captain America next!

My readthrough of all of the Stephen King books I've never read before continues with 1998's Bag of Bones. Like many of the mid-90s to 2000s King books I had little idea what this book was about going into it. That's probably always for the best with King as the surprises are part of the experience. Like many other King books it's about a writer, it's set in Maine, and it involves a child with spooky abilities. Unlike most other King books that I've read it's much more of a traditional ghost story. When Mike Noonan's wife die unexpectedly he's shocked. He's even more shocked to learn that she was pregnant. Dealing with severe writers block for four years and haunted by nightmares and questions about things his wife may have been hiding Mike seeks answers as their lake home, Sara Laughs. The lake home was named after Sarah Tidwell, an influential but never recorded blues singer who was a victim of the racism of the residents of the area in the early 1900s and who haunts the house and the nearby woods. Caught up in child custody case between local widowed mother and new love interest Mattie Devore and her billionaire father-in-law Max Devore, Mike is lead by the spirit of his late wife to uncover a curse that afflicts the unincorporated town in Castle County he has chosen as his new home.

I would put Bag of Bones fairly high in my ranking of the best Stephen King books. It's... different from most of his other books. Again, it's almost more like a gothic romance at times (the back of the original hardcover calls it a haunted love story) as it truly is a ghost story. The books goes to some unexpected places, has wonderful characterization and dialogue, and sets up some very tense scenarios that all seem very plausible. The end of the book moves a bit too fast, condensing lots of revelations into about 100 pages. It easily could have been 100 pages longer and the book probably would have been all the better. How often do you say a Stephen King book needs to be longer? The haunting aspects of the book do remind me of The Shining at times while the setting and themes bring to mind Dolores Claiborne and Needful Things. 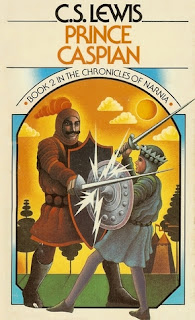 Now how about something a bit more on the lighter side? My daughter and I finished reading through Prince Caspian this week.
Released in 1951, it is the second book in The Chronicles of Narnia in the original order (the fourth in the revised order) and it tells of Peter, Susan, Edmund, and Lucy returning to Narnia one year later. Of course, since time flows differently in Narnia than in our world 1,300 years have passed in Narnia. The Telmarines have taken over Narnia causing the magical talking beasts to have disappeared into hiding. Aslan also hasn't been seen for many years with believing he's just a myth. Like Tolkien in The Lord of the Rings, C.S. Lewis uses a form  medieval interlacing literary structure so major elements and what different parties are doing are told out of order. It's probably a bit harder to follow for younger children, especially due to some rather archaic language, but there are some excellent characters and almost any scene with Aslan is just golden. It's not one of my favorite of the Chronicles of Narnia but it's pretty significant in the overall story.

Ready to check out the most popular reviews of the week? Let's see what we've got!

Mother Boxes from DC Comics Multiverse: Justice League is a review from 2017 that shot up in popularity no doubt due to how well received the Snyder cut of Justice League has been. These were a build an accessory that came with a few of the Walmart exclusive figures back when Mattel still had the DC license. This is its sixth week on the list so folks are still way into this.

Cobra Infantry from G.I. Joe: Classified Series is a new review for the week. Everyone just loves this line right now, don't they? It's a shame Hasbro can't seem to improve distribution of these as they're some of the best figures on the market.

Man-E-Faces from Masters of the Universe Origins is on his second week! This guy is really fun and Mattel did a nice job with the Origins figure. When reviewing this guy I realized how few Man-E-Faces figures I've reviewed. Maybe he needs his own focus month in the near future...

Lords of Power from Masters of the Universe Origins was off the list for a few weeks but it's popped back on again. With the mass market release of the Lords of Power Mer-Man maybe folks are wanting to get a better idea of the differences between this release and the new release?

Thanos from Marvel Legends Series is another new review for the week and it's one of the best toy renditions of the Mad Titan ever! I love this guy and he's partially responsible for getting me back into collecting Marvel Legends.

Trap Jaw from Pint Size Heroes is from last year's Trap Jaw-ly celebration and for some reason it got really popular last week. This is it's second week on the top 6. Weird, huh?