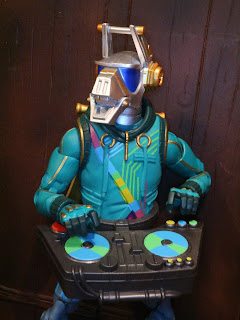 Jazwares Fortnite: Legendary series has been one of the best surprises of 2019 and guess what? They're following up the incredible first series with a second series filled with cool, crazy characters. Series 2 includes the fish-headed Leviathan, the artists known as Abstrakt, main guy Jonesy, the fierce warrior Valkyrie, and the funky fresh DJ Yonder, who I'm checking out today. Rather oddly, however, only some figures from series 2 have shown up so far, and they seem to be showing up individually rather than in a full grouping. Literally all I can find out about DJ Yonder is that he's a DJ, his name is Yonder, and he is an Epic level outfit from the Season 6 Battle Pass. That's it! He's darn cool, though, and comes with a ton of cool stuff. Seriously, these are just solid toys with cool designs. Let's groove with DJ Yonder after the break... 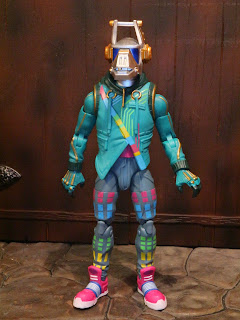 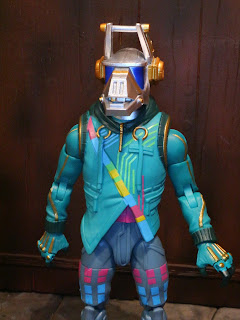 
* DJ Yonder looks just like... well, DJ Yonder. What the heck is DJ Yonder supposed to be anyways? A robotic donkey? A lost member of Daft Punk? A sentient pinata with cyborg upgrades? Yes! All of those! Well, maybe not. Who knows, though? DJ Yonder looks pretty cool and has some very funky clothing with lots of wild colors. His hoodie is actually made from a pliable plastic that is permanently attached over a more stand body underneath. There are lots of cool little details such as the drawstrings to tighten the hoodie and various pockets all over his outfit. 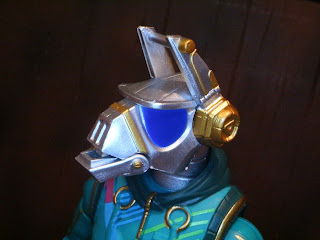 * The helmet (or maybe it's really his head!) is very cool. I love the large eye lenses and the ear-like headphones. How bizarre, right? Bizarrely awesome, you mean. 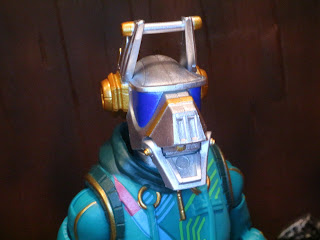 * While DJ Yonder doesn't have alternate face plates like most other figures in the line, he does have a hinged jaw. That's a cool feature that makes him just a little bit more fun. 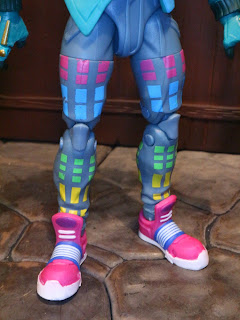 * Check out these pants and shoes. What is going on here? The pink sneakers are just too hip for words while the pants look like they're the background of some sort of rhythm based video game. 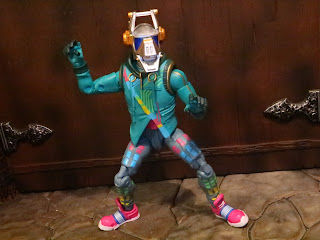 * You may not realize it at first but DJ Yonder has as much articulation as any other figure in this series. His butterfly jointed pecs, balljointed torso, and swivel waist are all hidden under his hoodie, but they're still there and still functional. These are some of the most fun toys on the market by a mile. I'm incredibly impressed every time I open one. 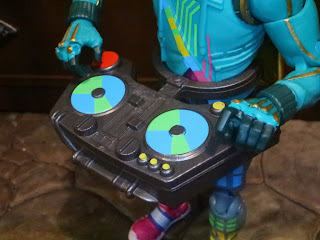 * DJ Yonder comes with a mobile turntable and mixer station. It clips around his waist via a plastic clip (his rubber hoodie helps keep it in place) and it just seems really cool. He actually looks pretty good interacting with it, too. There are multiple paint applications, of course, which really shows that Jazwares is taking it to the limit with this line. 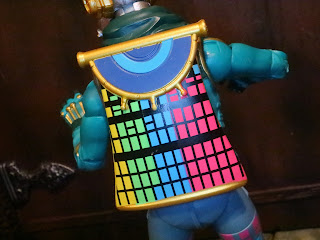 * DJ Yonder's Back Bling is called the Waveform and it apparently is some sort of equalizer or something. But made as a cape, maybe? I honestly have no idea what it's supposed to be, but it sure is snazzy and it fits on his back quite well. 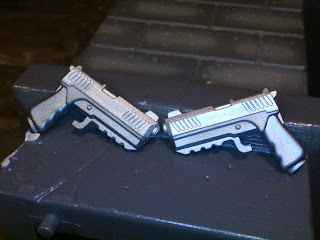 * When things heat up at the club, DJ Yonder is ready to throw down with his dual pistols. I love the sculpt of these! They're so sleek and sexy! They look pretty serious and realistic with just a little but of a sci-fi flourish. Just a bit! They even have a shinier silver on the slide as well, which makes them all the more impressive. 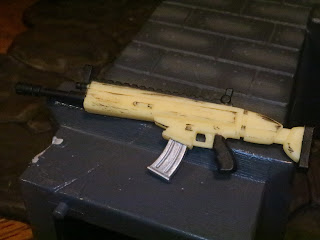 * When he's gotta lay down some sick lead, DJ Yonder can pull out his Assault Rifle. This is the Legendary or Epic version, modeled after the SCAR, and it's a pretty slick looking rifle, too. Multiple paint applications and some nice wear and tear effects make this much nicer than the weapons you'll find in any other comparable lines. The Visitor came with this same weapon, by the way, but the paint on this one is a little bit better. 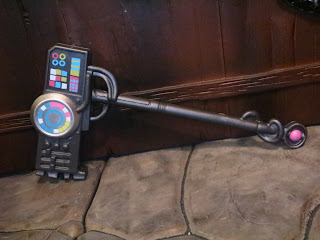 * DJ Yonder's harvesting tool is the Smash Up, which apparently is some sort of DJ equipment mixed together with.... an ax, maybe? It's really weird. Cool, but weird. 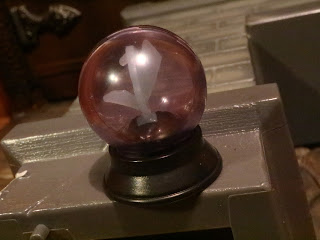 * Last up is the Rift-To-Go, a portable energy generator of some sort that teleports your character into the sky, allowing them to go back into gliding mode. It's an unusual piece with a black plastic base and a translucent crystal ball like dome with something white inside. There is a grip on the bottom, too, so that figures can grip it and tote it around. 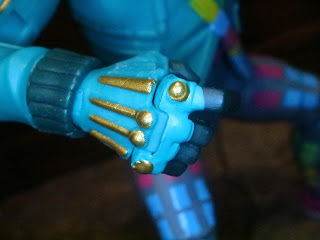 *  My biggest complaint with this line is that Jazwares went with hinged fingers. The fingers move with one hinge and while they're not as problematic as the fingers on older Marvel Legends figures, I still don't like them that well. They have a fairly tight grip, but sometimes they're still tough to us, especially for thinner accessories like the melee weapon or a gun grip.I will say that DJ Yonder's are working better than most other figures thus far, though, so maybe these eventually won't be much of a problem. 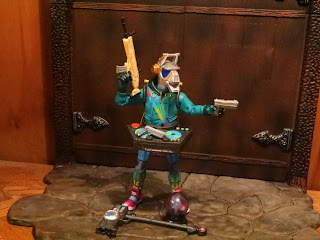 For $20 bucks, Jazwares' Fortnite: Legendary Series figures are some of the most fun toys on the market and DJ Yonder is one of my favorite figures yet. Seriously, when the figures are this good, feature so much quality articulation, and come loaded with cool accessories with their own elaborate paintjobs, it's hard not to consider this a truly Epic line. DJ Yonder is another Epic figure: I simply cannot give Jazwares enough credit for how great these figures are! Keep searching around as these figures are definitely appearing multiple places now and they're worth hunting down. They're fun and funky!