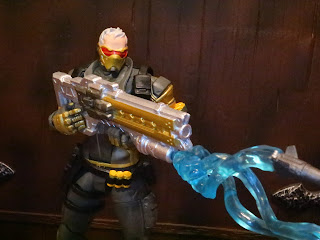 Over the past month or so this Golden variant of Soldier: 76 has been showing up through various international sellers and I decided to go ahead and order one. I'm not sure who this figure is going to be exclusive to when (if?) he makes his way to the United States but he definitely seems like an exclusive for this line. So far the exclusives have mostly been variants of previously released figures (Chrome Genji, Bitrate Lucio, Bundeswehr Reinhardt), so releasing Soldier: 76 in this color scheme fits the pattern. He was previously released in a 2-pack alongside Ana in her Shrike outfit, so this is the first time you can pick him up individually. He definitely is just a repaint with no new accessories or sculpted parts, so this review will be a bit briefer than most. Let's check out the Golden Soldier: 76 and see how he fares after the break... 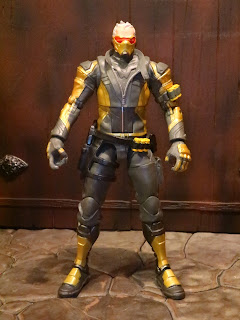 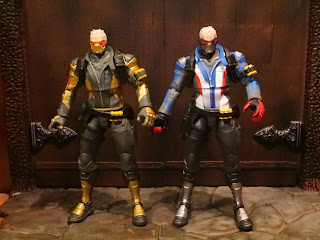 * On the left is the Golden Soldier: 76 while the standard Soldier: 76 is on the right. The paint applications are the only real differences here, as the figure has the same great articulation, accessories, and sculpt. Also, this version of Soldier: 76 has two different feet, while my standard version had two left feet. 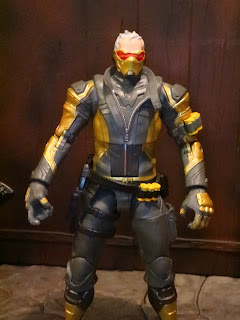 
* Soldier: 76 has the same sculpt as the standard figure but this time he's decked out in grey outfit with golden highlights. The Golden costume is one of Soldier: 76's Epic level costumes and, for the most part, the color scheme is pretty faithful to the in-game model and the paintwork is quite clean and neat. He also has the removable harness, the same as the standard figure, though I don't have it on in the picture to the left. 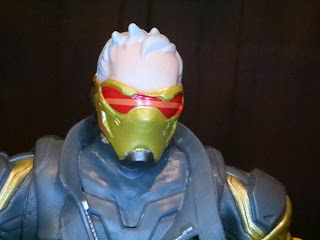 * The headsculpt is great. While his face is hidden behind his Tactical Visor (which looks pretty cool), his white hair is clearly visible. Interestingly, he doesn't have the scar on his face that the standard figure had. The gold and red combination looks really good here and this being the lone splash of red on the figure allows the visor to really stand out. 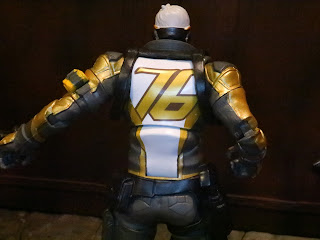 * On the back of his jacket is a solid gold "76"  Honestly, I'm not really sure what the 76 refers to, though Soldier: 76 is the codename Jack goes by after Overwatch is disbanded and he becomes a vigilante. 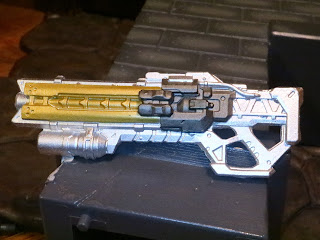 *  Soldier: 76's main weapon is the Heavy Pulse Rifle. This is a cool, boxy, futuristic energy rifle that looks like a Nerf blaster of sorts. The paint applications on it designate this as the Golden version of the weapon, an actual skin for the item in the game as well. 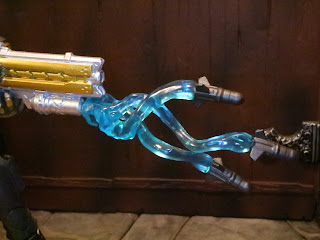 * The coolest part of the figure might be these Helix Rockets that "launch" from the bottom of Soldier: 76's rifle. The painted rockets are actually attached to two blue "swirly" plastic trails. They plug into the bottom of the Heavy Pulse Rifle and again offer a really dynamic way of displaying the figure. They look really cool "flying" through the air. These rockets are dark gray, as opposed to the silver rockets of the standard figure. 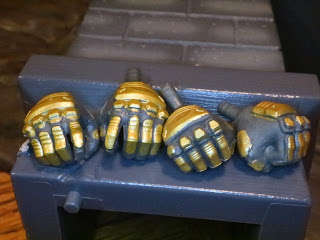 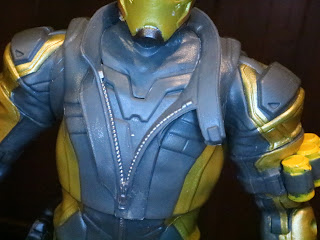 * The in-game outfit uses a mixture of black and gray on the non-gold areas, making the outfit seem a bit more plausible. Here, we just get gray, making things seem kind of plain and not as well thought out. 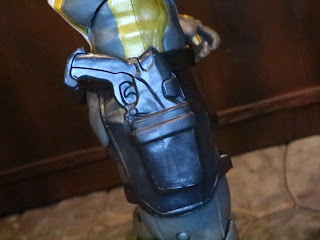 * I harped on it in the original review and I'll harp on it again:  Soldier: 76 has a pistol on his right hip that is not removable. Not. Removable. What the heck? Seriously, what is this? 1999? There is no excuse for Hasbro to make a permanently attached sidearm in this day and age. This has been one of my biggest action figure pet peeves for years! Furthermore, in the game the pistol is painted Gold. Not here, folks. Not here. 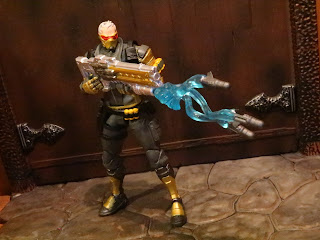 Soldier 76 in his Golden outfit is definitely not a bad figure, though he's not as impressive as many others in the line. I love his headsculpt and pulse rifle, but I do wish he had more paint applications on his outfit. Oh, and the non-removable pistol has got to go. Seriously. It's very outdated. Still, this is an interesting repaint and a Great figure that I assume will be a retailer exclusive, but I guess it could also be part of series 3. If you know anything else about this variant of Soldier: 76 here let me know.

If you're a fan of Soldier: 76 I've also reviewed the standard figure from the Ana (Shrike) and Soldier: 76 two-pack. For more Overwatch Ultimates reviews check out the following: