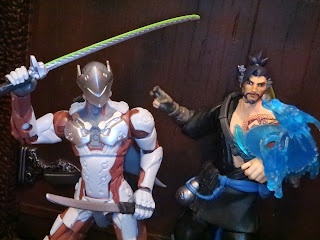 Ready for another review from Hasbro's Overwatch Ultimates line? Of course you are! This has definitely become one of my favorite lines of 2019 and today I'm checking out another fantastic 2-pack, this time featuring brothers Genji and Hanzo. While Genji was released previously in his Chrome outfit as an Amazon exclusive (and is also part of the recently released Carbon series 4-pack) this is Hanzo's first figure in the line. These guys are part of the second series of figures and they've been showing up in stores at GameStop, which is where I found mine. Let's take a look at the Shimada brothers after the break... 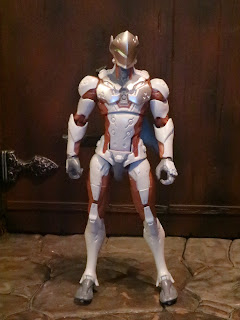 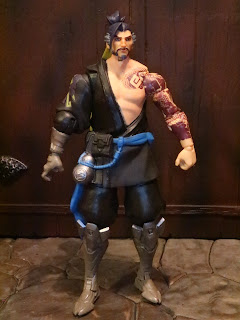 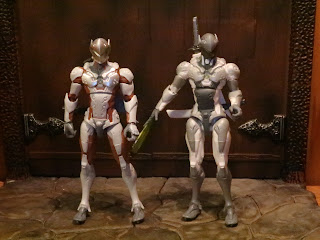 * On the left is the standard Genji from this set while the Chrome Genji is on the right. Other than the color scheme, these are the exact same figures. For the full rundown on Genji make sure to check out that review. As it stands, I'm just pointing out the new colors and the accessories. I will say that while my Chrome Genji had two left feet, the Genji from this pack is A-OK. 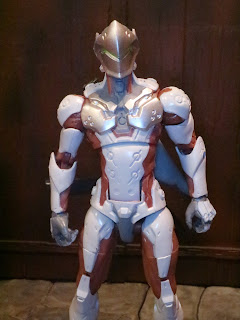 *  As I mentioned in my review of the Chrome version of the figure, the fact that Genji is a cyborg ninja is already a winning point in his favor. He's an incredibly cool looking character with a sleek design. I like the red highlights on his standard figure even better than the Chrome version. Genji's outfit is nicely detailed with lots of defined armored plates and various ports and such, too. 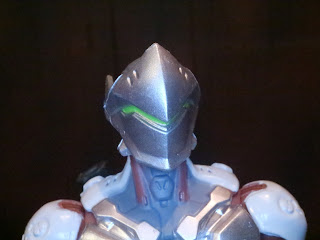 * Genji is wearing a helmet that covers his whole head. It kind of reminds me of Reinhardt's helmet, though I imagine that's unintentional. The visor is green, so while there are no eyes there is at least an eye line. There's also a grey flowing band coming from the back, presumably intended to be the tail of a headband of some sort. 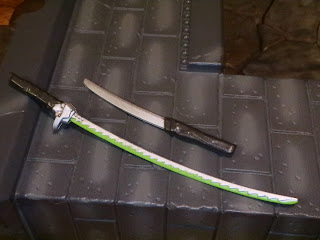 * Genji comes with two swords: A katana and a wakizashi. They're both quite cool, fit in his hands well, have some paint details (I love the green blade of the katana), and slide right into the scabbards on his back. 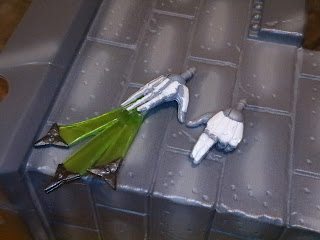 * Overall Genji comes with four hands. Two of those are standard grips intended for holding the swords, but the other two are more unique. Genji has an alternate gesturing left hand and an outstretched right hand showcasing Genji's shuriken tossing ability. In the game Genji can either toss three shurikens in a row or toss three shurikens in a spread, known as the Fan of Blades. This looks awesome in person! The yellow "motion effect" is a bit rubbery but it stays in place well and really sells the effect of these being in motion. 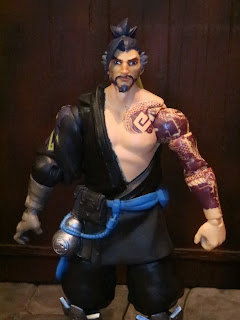 * Now we're on to Hanzo! Hanzo has a very unique appearance that manages to be both very traditional looking and very modern at the same time. Hanzo is an assassin and archer, and he's clad in dark clothes that provide him the maximum of freedom of movement. The left side of his body is almost fully exposed, showing off his intricate tattoos. He's also decked out in very modern, heavily armored greaves and boots, not too dissimilar from those of his brother. 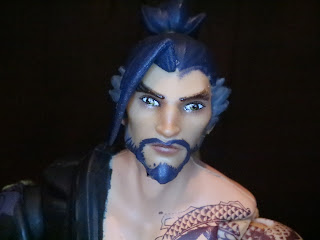 * The headsculpt on Hanzo is very good. I love the personality in his hair style and his facial hair. The face printing technology has been put to good use, as he looks excellent in person. Like Genji, Hanzo has a long, glowing band hanging down the back of his head, presumably the band used to tie his topknot. 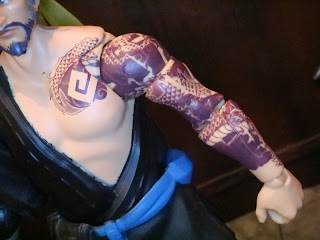 * Here's a closer look at Hanzo's intricate tattoos. The printing is quite nice with lots of intricate details. 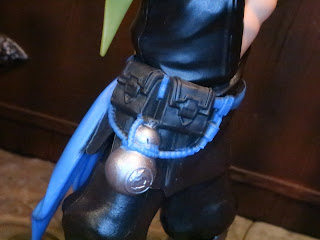 * On Hanzo's belt are some various items such as a small blue cord, some pouches, and a silver object that looks like BB-8. Is this an explosive perhaps? Or maybe a beverage container, like a canteen or flask? 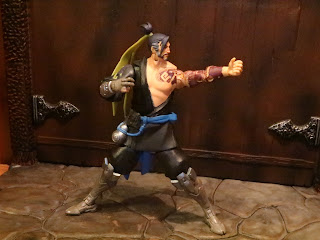 * Hanzo has a very full range of articulation and can take some very wide stances, suitable for his role as an expert archer. His arms actually have differing articulation schemes to better work with his outfit. He also has a balljointed waist rather than the hinged waist and balljointed torso combo of most figures, as well as the pectoral hinges Hasbro has been giving most of the figures in the line. 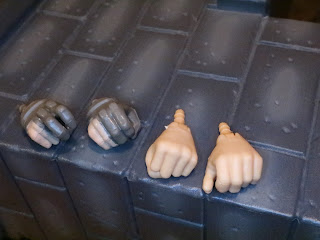 * Hanzo comes with four alternate hands. He has a standard pair of gripping hands, a left handed fist, and a right handed two-finger grip for notching an arrow in his bow. 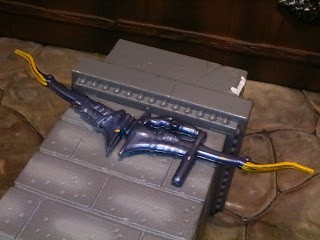 * Hanzo's bow definitely looks more high tech than you might expect. It doesn't have a string or anything but it does have a few paint applications. 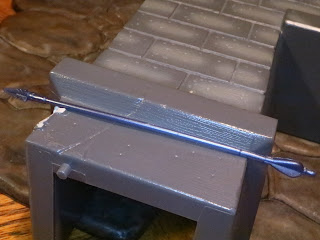 * Hanzo also comes with his own arrow. I 'm really glad the bow and arrow aren't attached, which is something that Mattel tends to do on so many of their figures. Hasbro usually does quite a bit better with accessories than Mattel, though, so good for them! 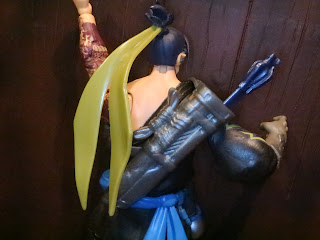 * Hanzo's quiver is a separate piece that fits around his body via a strap. It has some permanently attached arrow in the quiver, although there is a hole for his separate arrow, too. 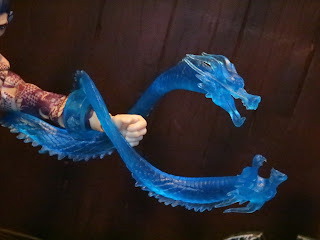 * The coolest accessory Hanzo comes with is this manifestation of his Dragonstrike ability. It's a translucent blue pair of dragons that can fit over his ram, as if he is summoning them to pursue his enemies! This kind of reminds me of something from the The Real Ghostbusters line, which is definitely a point in its favor. 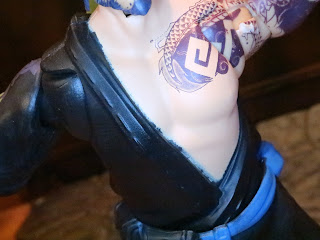 * The paint line down the middle of Hanzo's chest is very, very messy. I've seen some folks with better Hanzo figures, so shop around if you can. They don't all look this bad, but it's a more common problem than it should be. 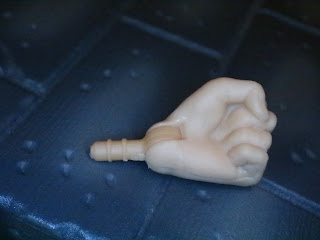 * Hanzo's hands are difficult to swap. Like with most other figures with swappable hands, be patient! Use a little heat and/ or firm, even pressure and the hand should eventually swap safely with no breakage. 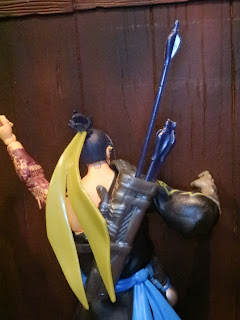 * Hanzo's arrow looks like it should fit in his quiver... but it sticks out like this. Seriously? That just looks silly, Hasbro! 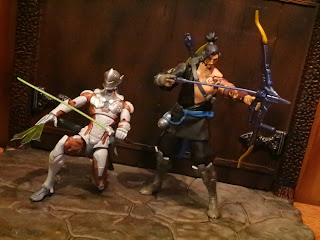 While it has a few minor flaws, overall Hanzo and Genji is a pretty sweet set. I'd definitely give it a Great and a 1/2 rating as you're getting two very cool figures loaded with extras. The Amazon Genji isn't a standard release, either, so for many collectors this might be their first Genji. If that's the case then you're getting two completely new figures as well. The Shimada brothers have a great story in Overwatch and packing them together was an excellent choice. There's a lot of coolness here for sure!

If you're interested in more of Genji, check out my review of Genji (Chrome).