Toy Review: Battle Bones from Masters of the Universe by Mega Construx 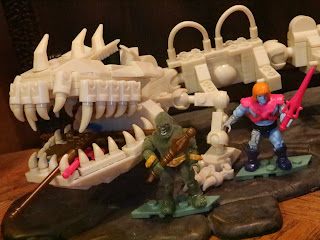 Masters of the Universe had some pretty incredible exclusives at SDCC 2019! First up was the incredible Masters of the Universe Origins 2-pack that's kicking off a new line which should be available at retail in late 2020. Next up was the very nicely done She-Ra vs Shadow Weaver 2-pack which celebrated the release of the doll line based on the new Netflix She-Ra series. And now, today, I'm checking out the third SDCC2019 exclusive: The Mega Contrux Battle Bones. Yup! Battle Bones! I loved Battle Bones as a kid but, sadly, he was a part of my childhood collection that got sold off at some point and I haven't yet replaced him. While this Mega Construx Battle Bones is no substitute for the real thing, he is a darn cool item. Plus, he comes with four figures (including my beloved Moss Man), a Moss Man air freshener, and a ton of weapons. Mattel seems to have big plans for Mega Construx and this was definitely the most exciting SDCC exclusive in my eyes this year. Let's check out this set after the break and see why it's so incredibly fantastic. Well, I will go ahead and say that it has Moss Man, so there is that. I actually had a Moss Man birthday cake for my birthday this year, so you can say I'm all about that Moss Man. Anyways, Battle Bones and Moss Man after the break... 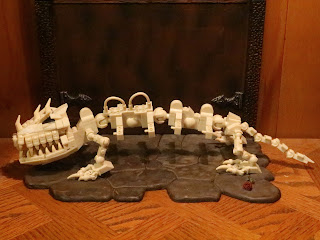 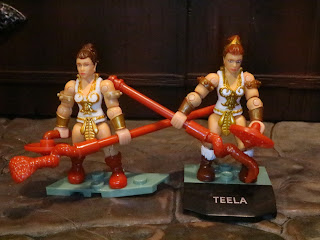 * Battle Bones comes with four figures, three of which are characters that have already been released. While the standard Teela/ Battle for Eternia Teela (on the right) seems more like she's based on the cross-sell art or MOTUC figure, the Teela included with Battle Bones (on the left) has brighter reds, the snake hood (not shown here), and darker hair, more like the vintage toy. Her Staff of Ka is also much longer than the other Teela's. 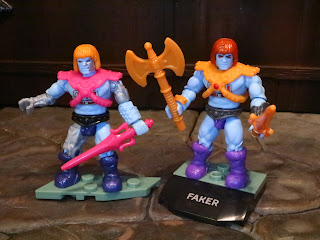 * The Faker included with Battle Bones (on the left) differs greatly from the standard Faker/ Battle for Eternia Faker (on the right) due to having darker purple features, magenta armor and sword, and some robotic parts mixed into the sculpt. He's very different and not easily confused with his previously released counterpart. 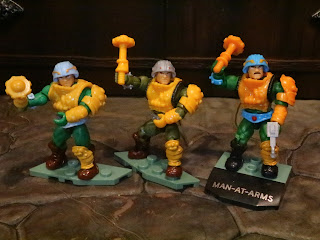 * Man-At-Arms has been released twice and from left to right we've got the Battle Bones release (bright green body suit, no mustache, paler orange armor), the Castle Grayskull Man-At-Arms in the middle who looks more like the minicomic depiction of the character (olive green bodysuit, pale orange armor, and no mustache), and the standard/ Battle for Eternia Man-At-Arms on the right, who looks like a mini MOTUC figure. 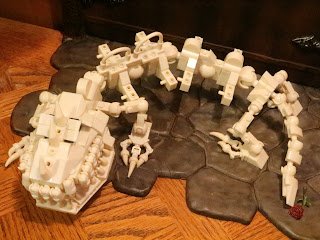 * Battle Bones is a little over 15 inches long, is build from lots of Mega Construx bricks, and is fully articulated. He has four balljoints in his tail, hinged toes, balljointed ankles, knees, and hips, three balljoints along his spine, and a hinged mouth. This is a very, very cool translation of the vintage toy and it is way more articulated, too. He's also quite sturdy for a skeletal build of this sort. 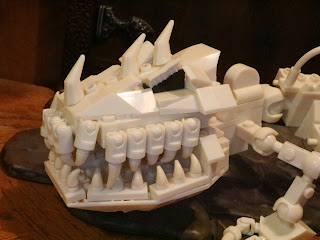 * The head is incredible. I love the look of Battle Bones and his dark, empty eye sockets. He's also covered with spikes and teeth. Lots and lots of teeth! 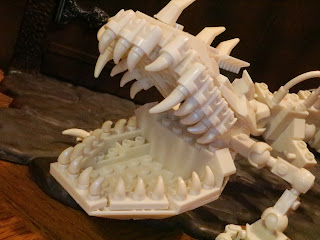 * When you open Battle Bones' mouth you can not only see his 36 sharp teeth (the top teeth are poseable) but you can also see where the excess weapons he comes with can be stored. Yes, the original Battle Bones was really a very unique action figure carrying case and accessories were intended to be stowed away in the creature's mouth. You can definitely do that here, too! 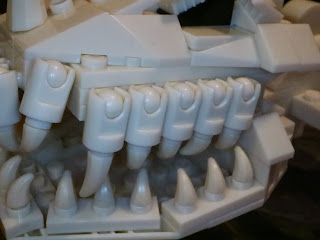 * Here's a closer look at the teeth. You can move thee around, much like the teeth on Castle Grayskull, to get the exact look you want for Battle Bones. 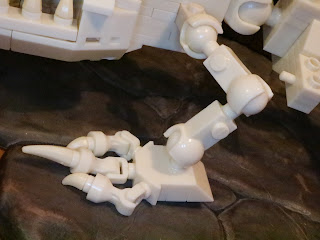 * Battle Bones' vicious, clawed feet look pretty wicked. Here's a close up shot of the various hinged and balljoints which allow him to take some pretty cool poses. 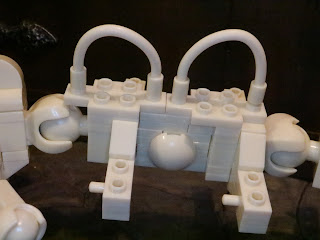 * Since Battle Bones was originally a very unique carrying case, the handle of the vintage toy is replicated here. It works, too. The handles are permanently attached to the large plates that everything else underneath attaches to, so it feels really sturdy when you carry him around. 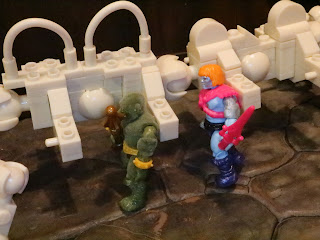 * One of the worst parts of the vintage Battle Bones was that his ribs, which were where you stored the figures, tended to break easily. For the Mega Construx Battle Bones, the designers utilize pegged pieces and the pegs in the back of each figure. Simply plug the figure onto the plug on each rib and you can tote eight figures around no sweat. Who will be riding your Battle Bones? 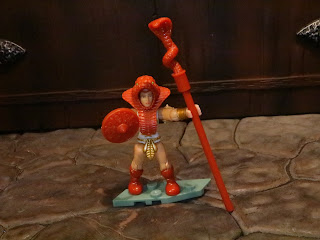 * Battle Bones comes with four figures, three of which I kind of covered above since they've already been released in some fashion in the line, but I do want to give them a little more attention. Teela, based more on her vintage toy I believe, comes with her staff, her shield, the snake armor, two arm bands, and a base. I like the deeper red colors here. Plus, having the snake armor is a big plus (it first appeared with the Castle Grayskull Goddess). 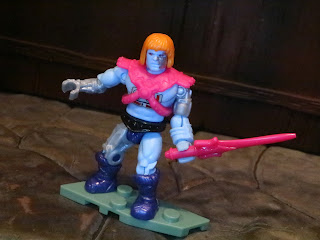 * After Moss Man, Faker is without a doubt the second best figure in the set. Not only is he noticeably different from the standard release with his magenta colored armor and sword (which appeared in his cross sell art) but he actually has a visibly robotic right thigh, left bicep, and right hand, along with half of his face painted silver. I believe these parts are reused from the Terminator Mega Construx figures and, darn, that was a really great idea, wasn't it? It definitely makes this guy one heck of a winning figure. 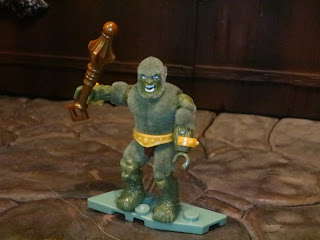 * I love Moss Man ad this guy is just a perfect translation of the vintage toy in the Mega Conxtrux line. He's got his yellow wristlets, his brown mace, and he is flocked. Yes, flocked! His hips, torso, had, biceps are all covered with green flocking and he looks glorious. He isn't scented that I can tell, but don't worry: This set includes a solution for that problem... 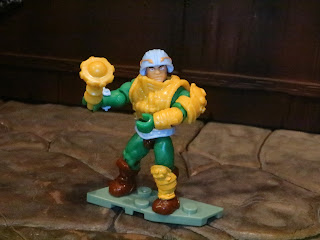 * There's nothing inherently wrong with Man-At-Arms but he definitely is a duller figure as we've already gotten two other versions of him. This guy feels like a combination of the two with his brighter bodysuit and duller armor, kind of like the vintage toy. He still has his wrist cuff, shoulder pad, and his mace, though, which still fits on his back. 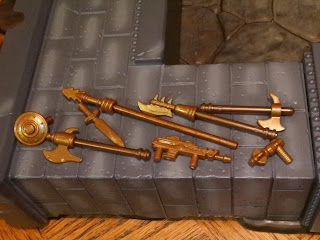 * Battle Bones comes with a massive amount of weapons including a nice set of weapons in a bronze color. You get the Stinkor shield, Buzz-Off ax, Grayskull short sword and short ax, Randor's spear, Webstor's rifle, Scareglow's halberd, and Zodak's pistol (yeah, I know most of those came with the Weapons Rack with Grayskull first, but it's easier to identify them with the characters who they were reused with now). 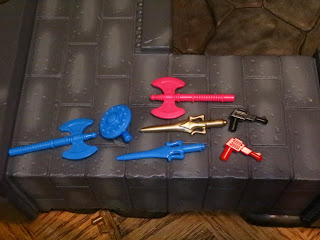 * Next up are some more colorful weapons, including a set of He-Man's sword, shield, and ax in blue (like the vintage Weapons Pak), a magenta He-Man ax (that goes perfectly with Faker), a gold Power Sword (like the Battle for Eternia game, Thunder Punch He-Man, or the DVD set from a few years back), and two Grayskull pistols, now in black and red. 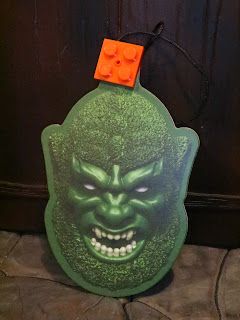 * One of the most incredible things this set comes with is a Moss Man air freshener. It smells of rich, beautiful pine and has an incredible depiction of Moss Man on it! It also has a little Mega Construx clip and string to hold it up so you can hang it wherever you like. Beautiful, right? 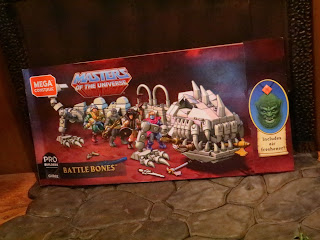 * Of course a building set has gotta com with instructions, and you get those here. It's actually a fairly fun build with lots of different pieces, not too much repetition, and clear, concise instructions. I had no extra parts, everything was included, and the instruction manual actually has a little tab on the front to help keep it closed. 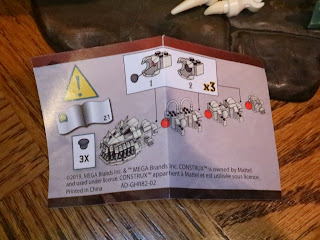 * My only complaint is that there are some little rubber pieces that fit inside of the balljoints along Battle Bones' spine. Unfortunately, the instructions showing you where to put these are in a separate bag which I didn't open until I already had the set together. I guess these were included to supplement the guidebook leaving them out, huh? 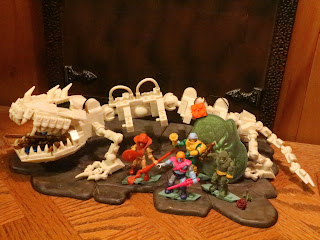 This, right here, is the winner of SDCC 2019 for me. One amazing build and a big MOTU creature, four very cool figures (though we didn't need another Man-At-Arms), an armory full of weapons, and a Moss Man air freshener. This set is without a doubt an Epic MOTU collectible and it really excited me for what Mega Construx has in store. I do hope they get better at releasing more unique characters rather than variant after variant, though, but that's not a huge problem with this set. This one is worth tracking down. I haven't checked prices on it, so hopefully it's available fairly reasonable for folks who want it. It really is a fantastic set!

For more Faker reviews I've also reviewed the M.U.S.C.L.E. Faker from the Series 3 Pack C, the Ultimates He-Man (which came with a Filmation Faker head), the Mega Construx Faker from the Battle for Eternia Collection, the ReAction Faker and Leo Faker, and the VYNL Faker.

Moss Man is one of my favorites but I've only reviewed the M.U.S.C.L.E. Moss Man.

If you're a Teela fan, I've reviewed a few Teela toys such as the M.U.S.C.L.E. green Teela and the standard M.O.T.U.S.C.L.E Teela, the Mega Construx Teela from the Battle for Eternia Collection, the ReAction Teela (Shiva), the neo-vintage Teela, and Super7's Ultimate Teela.

This is the first Battle Bones I've reviewed on the site. For more Mega Construx Masters of the Universe, check out the following:
Battle for Eternia Collection
Castle Grayskull
Evil-Lyn
Man-At-Arms
Wind Raider Attack