Action Figure Review: Beastman with Weapons Pack from Masters of the Universe ReAction by Super7 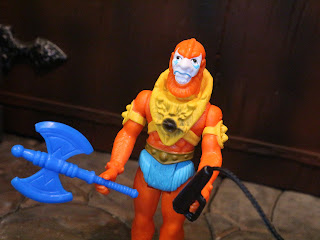 A few weeks ago Super7 released a surprise set of Masters of the Universe Reaction figures. Three of the figures are Leo variants, based on the MOTU releases from the Indian company Leo, but this variant is actually a tribute to the vintage 1984 Masters of the Universe Weapons Pak accessory set. The Weapons Pack included multiple accessories already included with figures in the toyline, most of them recolored slightly. While the standard Beastman sports a red furry collar and cuffs, this version is decked out in the yellow collar from the Weapons Pak. He also comes with enough extra weapons to stock a small armory! Ready to check out this cool Beastman with Weapons Pack? Then join me after the break... 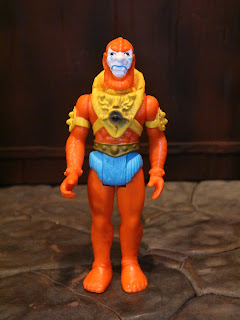 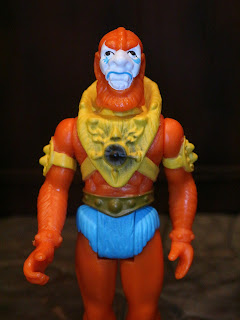 
* It turns out that this is the first ReAction Beastman I've reviewed on the site (I have the red Beastman but I never got around to reviewing him on here) and I'm really impressed with him. He definitely has a fantastic, vintage feel, but the detail in the sculpt really stands out. He also has neat, clean paintwork that reflects the vintage design of the figure. The yellow armor looks good and lots of folks will recognize this as how the armor from their childhood Beastman figure; the Weapons Pak was very popular and the accessories definitely made their way around to the figures in your collection. 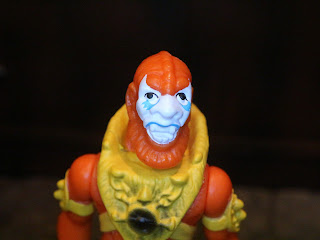 * I love the headsculpt. Beastman's nose and beard are very prominent, giving him a savage, vicious appearance, as do his teeth. 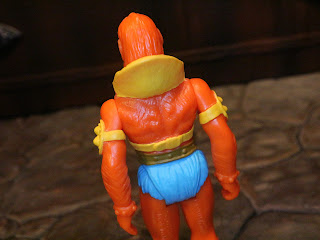 * The sculpted straps look great on the figure, as does the hair on his body. Excellent work! 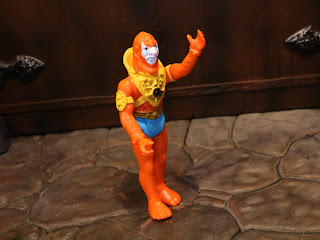 *   If you've ever picked up a retro figure like this, you know what to expect: 5 points of articulation, all swivel joints. Beastman feels very well made and sturdy.  Super7 has been very consistent in the quality of their ReAction lines over the past couple of years and has definitely perfected the style. 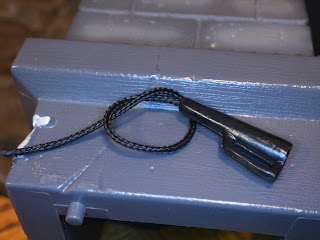 * Beastman's whip is smaller than the vintage accessory, but it feels exactly the same: A plastic handle with a small black cord. He can hold it in either hand (he can either grip the small hand guard or slide his left hand through the hand guard) and it definitely completes the figure perfectly. The vintage Weapons Pak included a standard black version of Beastman's whip as well, so this accessory doubly belongs in this set. 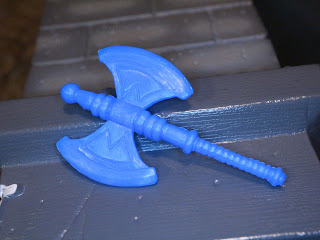 * One of my favorite accessories is this bright blue ax. I just love the design of He-Man's ax and it looks incredibly cool in bright blue. This is another one of the accessories from the vintage Weapons Pak, and probably the one I would have missed the most if it had been missing. 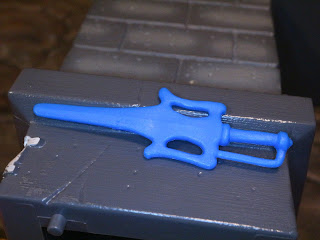 * The other blue weapon from the vintage pack is the Power Sword, and it's here too! I love it! It looks very much like the vintage accessory, just smaller. 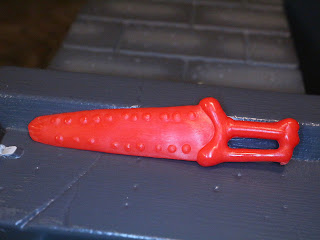 * Mer-Man's sword molded in red is an unusual inclusion, and one of the weapons that wasn't part of the vintage Weapons Pak. I don't recognize it from anywhere, so I'm guessing this is something Super7 made up. There are a few weapons from the vintage pack that haven't yet been made in the ReAction line, so they had to presumably use some stuff already made. 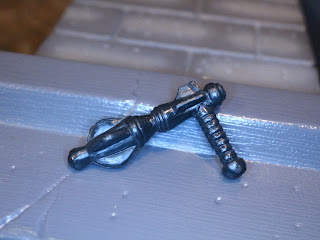 * Zodac's pistol in black is another piece from the vintage Weapons Pak that has been faithfully recreated here. Isn't it odd that Super7 hasn't released Zodac in this line yet, though? (Edit: Yes, someone pointed out that Zodac has been released. Even worse, I already own him!) 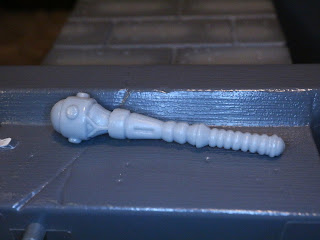 * Man-At-Arms' mace, now molded in grey, is another addition new to this pack. It really looks the same as the grey mace included with the Movie colored variant of Man-At-Arms, though, so I wonder why this was included? 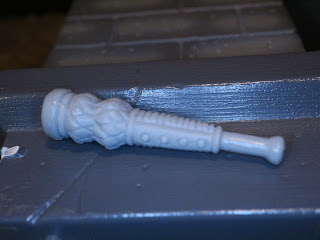 * Mekaneck's mace is also included, this time in grey. The vintage Weapons Pack included a few of the Castle Grayskull weapons molded in grey, so perhaps these are a throwback to those. 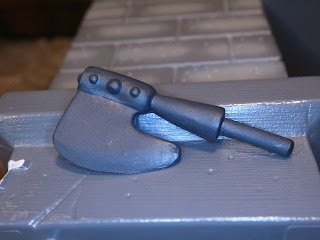 * Last, and most unusual, is Ram-Man's ax molded in black. This is another new piece that wasn't included in the vintage set. 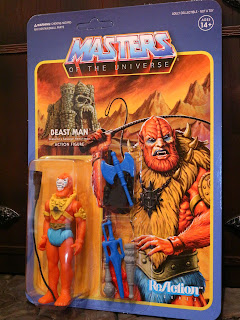 * The card art is excellent on most ReAction figures released by Super7 and their Masters of the Universe line is no exception. Beastman features a beautiful illustration of the character by Jason Edmiston. To preserve the card I actually made a slit in the top of the blister so I can slide the figure in and out. It work great and allows the figure to be displayed inside and outside of the card. It even worked on the two tiny blisters that the additional weapons are included in. I've got mine hanging on a metal pegboard similar to what you'd see in a retail store! 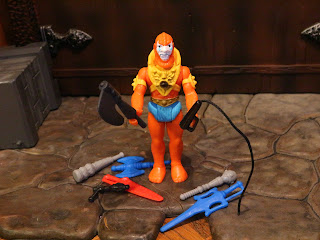 Just on his own, Beastman would be an excellent figure, possibly one of the best ReAction figures released. Throw in the multiple extra accessories included here though, (at the same prices as a standard ReAction figure), and you've got an Epic figure. This guy is just too much fun! The vintage Weapons Pak inspires a lot of adoration from fans of the vintage MOTU line and it's pretty cool that Super7 paid tribute to it in this way. Whether you're a fa of Beastman or you just want a bunch of cool weapons to use with various ReAction and other faux vintage action figures, this one is a solid buy.

I've also checked out one other Weapons Pak: The Masters of the Universe Classics End of Wars Weapons Pak.