Action Figure Review: Force Captain Adora from She-Ra and the Princesses of Power by Mattel 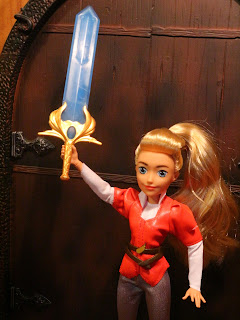 I'm still working my way through reviewing all of the figures from Mattel's new She-Ra and the Princesses of Power line based on the 2018 Netflix cartoon and today I'm checking out Princess Adora herself! Well, actually just Adora here. Force Captain Adora, actually. Thus far the 2018 Netflix series hasn't made a connection to Adora's family on Eternia, and who knows if they'll ever do so? The series seems to be forging a path all of its own and while it is a good show, I'd love to at least have a story arc connecting Adora back to her family at some point. Anyways, Adora is still the main character and her character design is one of my favorites from the new series. I like her outfit as it definitely has a military cadet vibe while still looking like it belongs in the fantasy setting of Etheria. Force Captain Adora comes packaged one per case, alongside of Bow, Catra, and Glimmer, meaning that tracking these figures down can be a bit of a chore. I managed to get one for me and one for my daughter (whose name is Adora!), though, so hopefully you'll have good luck like me. Let's check out Force Captain Adora after the break... 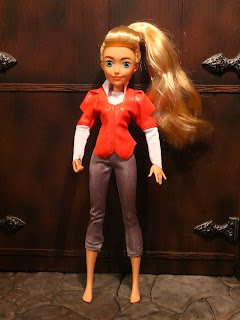 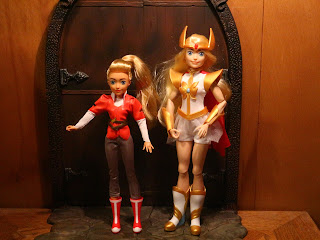 * In the new Netflix show, She-Ra is visibly larger than Adora. It's a lot like the way that the 200x/ MYP cartoon depicted Adam and He-Man. I'm actually really glad that Mattel did make She-Ra and Adora noticeably different in height. The scale in the line isn't perfect but it definitely works considering that Mattel took some liberties with the line to make the character designs more doll-like. 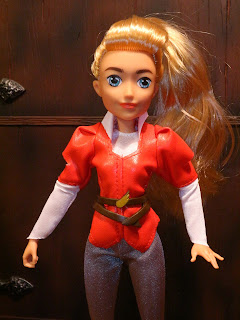 
* Adora looks like a blend between a more traditional doll and the character design from the Netflix show, which fits in with the aesthetic of the line. Her outfit is only two pieces and a belt, but white sleeves and undershirt give the illusion of the red blouse/ jacket/ vest being a separate piece over top of everything else. Adora is smaller than She-Ra, which is fitting for the show, and is fairly close in size to Catra. 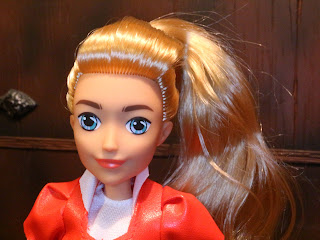 * The headsculpt definitely continues the style of taking the show's designs and translating them into a more traditional doll. Adora's hair is pretty cool, too, and captures the show's style quite nicely. It's longer than the hair on the show (where Adora sports a short ponytail) but the hair seems to be a big draw for my daughter, so I can understand why Mattel wants to make it a key feature for the toys. 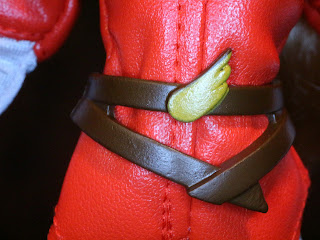 * Adora's belt is a separate, removable piece that easily can buckle on and off from the pack. It does nicely tie the rest of her outfit together and keeps everything looking crisp. 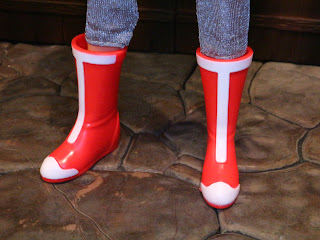 * Adora's boots have two things going for them: 1. They're fairly heavy, and thus help make the figure easier to keep standing. 2. They're easy to take on and off due to slits down the back. Usually I wouldn't find that to be a benefit but these boots are easy to put on for a child, meaning I don't get randomly asked to put boots on my daughter's figures all the time. 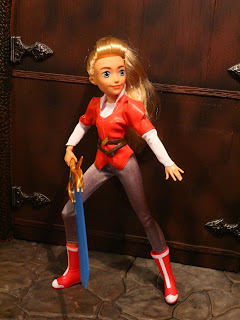 * Like the rest of the figures I've reviewed, the articulation on these reminds me a lot of the articulation on the DC Super Hero Girls dolls from a couple of years back. There isn't a lot of articulation but there's definitely more than I'm aware of on most doll lines. Adora's got swivel/hinge shoulders, knees, elbows, and wrists as well as balljointed hips and a fully balljointed head. Overall she seems to have enough articulation for a kid to have fun with while still not having so much as to be frustrating to play with. 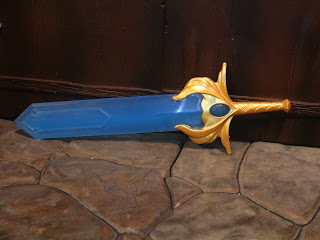 * Adora comes with the same sword as both She-Ra variants, and while it's more unwieldy for her than it is for She-Ra, that's true of the show.   The Sword of Protection's blade is translucent and it has a great design reminiscent of the aesthetic of the First Ones tech from the show while the hilt is reminiscent of She-Ra's tiara. It's a cool, sturdy piece that just seems very fun. 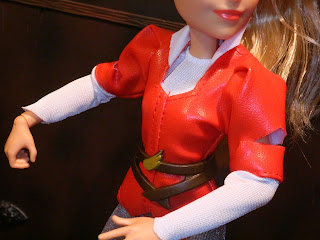 * The only thing I'm not wild about on this figure is the blouse. It looks a but too dull and the arm slits on the sleeves are weird. They're present in the show, but here they just expose the arms underneath rather than the long white sleeves. They look less like a design choice and more like a tear. 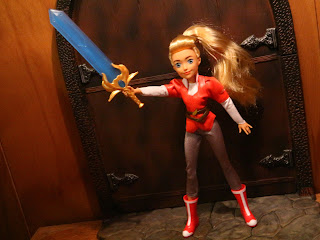 Force Captain Adora is another solid release in this line. She's not my favorite thus far (that would be Catra) but she is on the upper end of the line. There really have never been that many Adora toys made so having one available at mass retail is a pretty big deal. I imagine most folks reading this review realize we're not the prime demographic for this new She-Ra line, but I think the kids who pick these up will have a pretty good time with them. These seem to be selling well, but only time will tell if this line will continue in the future? Regardless, Force Captain Adora is a Great figure. I mean, are you telling me that any MOTU fan could pass up the chance to buy an Adora figure if you found her in a Target?


If you're a She-Raver who digs She-Ra/ Princess Adora then check out the figures I've reviewed: The Masters of the Universe Classics Galactic Protector She-Ra, the Club Grayskull She-Ra, the ReAction She-Ra, the She-Ra from the Super7 Battle for Etheria 2-Pack, and Mattel's She-Ra and the Princesses of Power She-Ra and Battle Armor She-Ra and Swift Wind.

For more reviews from Mattel's She-Ra and the Princesses of Power, check out the following:
Battle Armor She-Ra and Swift Wind
Bow
Catra
She-Ra