Action Figure Review: Glimmer from She-Ra and the Princesses of Power by Mattel 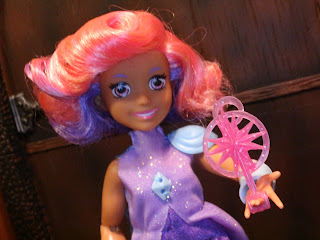 Today I'm checking out Glimmer, the last of the new She-Ra and the Princesses of Power dolls from Mattel's new series. Yes, there is an SDCC exclusive 2-pack and, yes, I'll be reviewing it soon, but this is the last figure of the standard first series currently available at Target. Glimmer definitely had quite a few changes from her Filmation appearance that most folks recognize, but I do like her in the show. Most of the characters in the show are quite likeable, which is definitely one of the strengths of the Netflix She-Ra series. I also like Glimmer's powers in the show and how they're sometimes a bit unpredictable and actually take a toll on her. I imagine that if the show continues, we'll get to see her grow into a more power and confident warrior as she masters them. I picked all of these up for my daughter for her birthday last month but, of course, I had to get a set for me as well. Let's check out Glimmer, the Princess of Brightmoon, after the break... 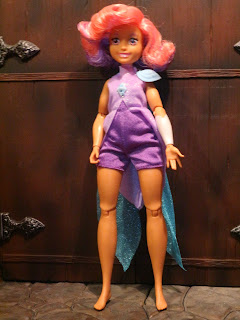 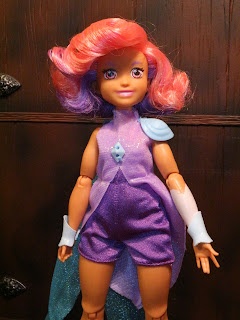 * Glimmer's redesign definitely caught the attention of fans early on as her costume was very different from the traditional Filmation costume. The colors are very similar, though. Costume wise, I feel like Glimmer is the most accurate to her television counterpart on the Netflix series. On the show Glimmer is portrayed as shorter and having a larger frame and, for the most part, I think Mattel captured that quite nicely. If you look at how Mattel has taken the show's designs and stylized them as fashion dolls, so to speak, Glimmer is clearly of a different body type than the other figures in the line. It works for her and makes for a unique and still fabulous looking character. 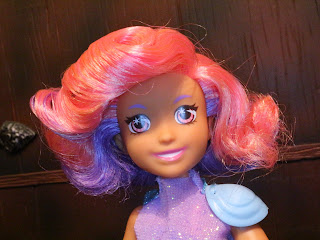 * The headsculpt and hair is where I'm kind of 50/50 on this figure. Overall, I like the face. Glimmer usually has some pretty exaggerated facial expressions, and I wish Mattel would have captured that here, but I do love her eyes (they have little stars in them) and the color of her hair. 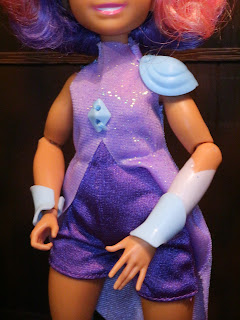 * Like most of the other figures, Glimmer's outfit is made from different materials but it's all sewn together. It fits the figure well and there are lots of little stand out details that are plastic but which have been sewn onto the costume, such as her shoulder pad and the jewel on her chest. She's also got bracers (which are removable) on her wrists. 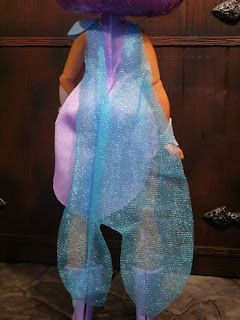 * Glimmer is also wearing a transparent, shimmery cloak. It hands down from her back, like a cape, and it adds another fun design element to the character. The more I look at Glimmer's costume, the more I really like the design. The colors are the same as the Filmation Glimmer but the outfit is a but more flowing. It fits her teleportation powers quite well, as she always seems to be in motion. 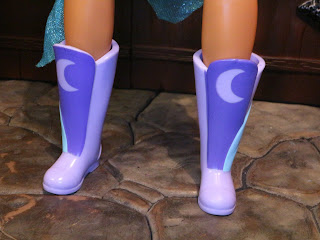 * Like most of the other figures in the series, Glimmer's boots are heavy in order to make it easier for the figure to stand upright. They also have moons on them, a fitting detail for the Princess of Brightmoon, of course 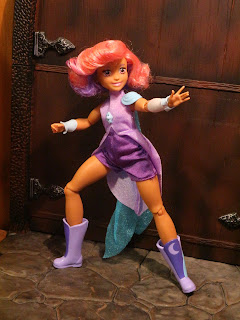 * The articulation on these reminds me a lot of the articulation on the DC Super Hero Girls dolls from a couple of years back. There isn't a lot of articulation but there's definitely more than I'm aware of on most doll lines. Glimmer's got swivel/hinge shoulders, knees, elbows, and wrists as well as balljointed hips and a fully balljointed head. Overall she seems to have enough articulation for a kid to have fun with while still not having so much as to be frustrating to play with. Her costume works really well here, too, as it doesn't interrupt the flow of her articulation at all. 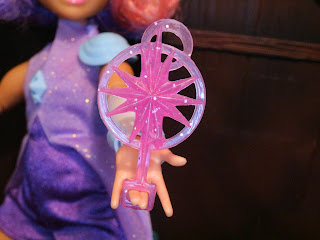 * Glimmer comes with... a Glitter Blast? It's clearly supposed to be one of her energy blasts but it just looks... off? It's too small (although it does attach to her fingers well). Something a bit more impressive would have been nice. 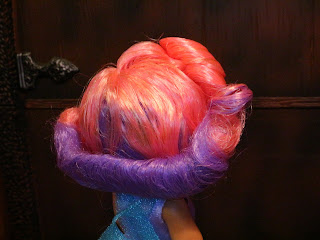 * On most of the figures Mattel has taken a loose approach to capturing the figure's hair (Catra, Bow, and Adora all have longer hair than their onscreen counterparts) but Glimmer's short hair seems kind of like her signature look. Why didn't they get it right? I really wish she looked more like the character on the show. Maybe kids won't mind as much, but I can see fans of the show being a bit put off by it. 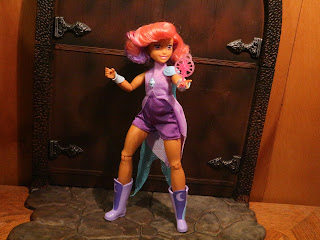 Adult fans are seriously giving this line some hate right now, but let's be real: This line is clearly targeted at kids. My daughter is 6 (She's read every vintage MOTU minicomic!), loves Masters of the Universe, and she really seems to like these. They definitely can't compare to MOTUC, or Mondo's MOTU figures, or Sideshow's statues, but they're not supposed to: They're $15 dollar toys that kids can play with! Glimmer is a Good and a 1/2 toy and completes the BFF squad in She-Ra. Fans who dig the show or just like different eras of MOTU for novelties sake will probably get a kick out of these. Try giving them to a little girl you know, however, and maybe you'll be surprised by how much they love them. You might even make a new MOTU fan!


If you're a fan of Glimmer, also check out my review of the MOTUC Glimmer.

For more reviews from She-Ra and the Princesses of Power check out the following:
Battle Armor She-Ra and Swift Wind
Bow
Catra
Force Captain Adora
She-Ra
Posted by Barbecue17 at 9/21/2019