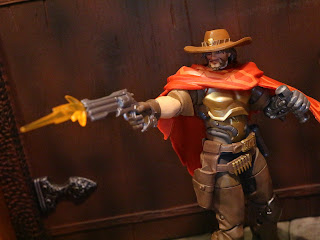 Yesterday I reviewed Junkrat and today I'm checking out another figure from series 2 of Hasbro's Overwatch Ultimates: McCree! Yes, if you remember correctly, I have actually already reviewed McCree, but that was the White Hat costumed McCree from the recently released 2-pack with Posh Tracer.  Except for the color scheme, the two figures are identical, thus this is one of those interviews where I rely heavily on the previous review and just point out the details of what the figure includes and the new/ different elements. Reuse is a pretty important of the action figure industry these days since it allows companies of all sizes (from the smallest of the small to the biggest of the big) to get more usage out of expensive mold tooling. Companies just don't sell as many of each figure these days, so maximizing mold usage matters. That's why Overwatch Ultimates is such an interesting line: While each figure character is a unique sculpt with no reuse, Hasbro uses the in-game color schemes to craft variants. It's a good idea and so far I've liked most of their choices. While McCree (White Hat) has more of a sci-fi cowboy/ BraveStarr feel, the regular ol' McCree definitely has more of a Man With No Name feel. Let's buckle up, buckaroos, and check out McCree after the break... 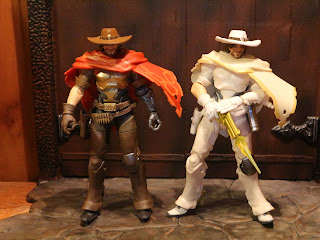 * On the left is the standard single-packed McCree I'm reviewing today. The "White Hat" McCree from the 2-pack is on the right. These guys are the same except for the colors chosen, so a lot of my thoughts on the standard McCree aren't much different than 2-pack version. * McCree is a rough riding bandit, vigilante, bounty hunter, and former member of Overwatch. Many of the Overwatch characters are very much archetypal characters and Jesse McCree definitely has elements of nearly any other outlaw type you've ever seen: A poncho, a six shooter, a cowboy hat, and a cybernetic arm. Ok, maybe the cybernetic arm is a bit unique. I love the brown and red details here. I definitely prefer this color scheme to the all white outfit, though it's slick in it's own way. 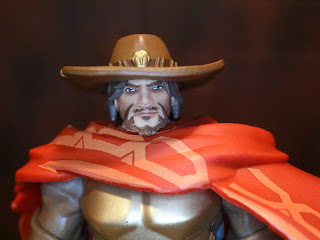 * McCree's headsculpt is excellent and the paintwork definitely captures his rough and rugged charm. I love his hat, too; the damage along the edges adds a lot of character to the design. You can tell that this guy has seen his share of close calls. Some collectors have commented that McCree's head is too small but that seems to be faithful to Blizzard's design aesthetic for the character. 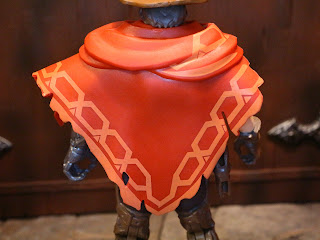 *  McCree's rocking a poncho ala Clint Eastwood before he talked to empty chairs. It's made from a fairly pliable material, so the articulation isn't hindered too much. The poncho here is much nicer than on the variant figure, as here it is a very eye-catching red with an orangeish design around the edges. I like the little rips and tears, as well. Gives it some character. 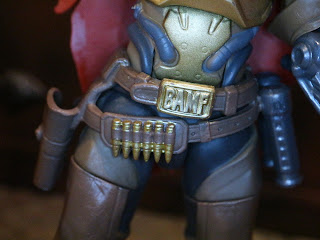 *  When he's not actively fighting, McCree can stow his Peacekeeper in the holster on his belt and the three flashbang grenades on the left side of his belt. They plug right on and stay on securely. He's got six more rounds and a belt buckle that proudly proclaims "BAMF." I guess McCree's a big fan of Nightcrawler, huh? Seriously, though, I'm kind of surprised that Hasbro allowed this on here. They did take away McCree's cigar, but at least he's got this. 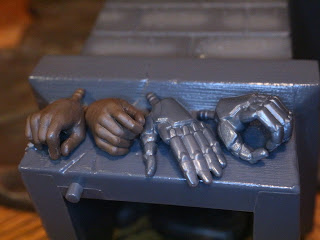 * McCree comes with four interchangeable hands, two for his cybernetic left and two for the regular ol' human right. His right hands are a standard pistol grip and a gripping hand for tipping his hat to the ladies (or holding a cigar), while his left hands are a standard grip for holding flashbang grenades and a flat hand for fanning his revolver. 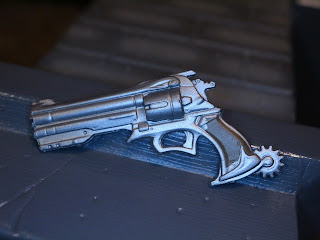 *  McCree's six shooter, called the Peacekeeper, is an amazing looking pistol. The color scheme on this one is so much nicer than the all gold version from the 2-pack and the sculpt is amazing. Seriously, this think is so darn sexy! Look at that detail! I love the spur on the grip, too. Imagine McCree pistol whipping a fool with this piece! 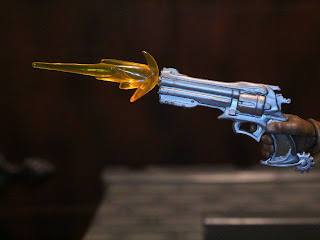 *  To improve the Peacekeeper, McCree has a firing effect that plugs into the barrel. Pair this with the fanning hand and McCree looks incredible on display! The blast effect on this piece is more orange, while the 2-pack blast effect is more yellow. 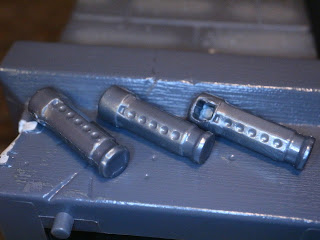 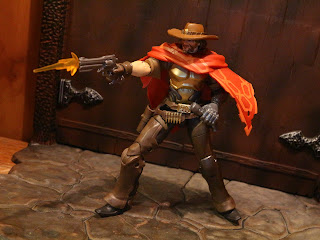 I had the same problem with the figure's heels resting a bit too low, just like on the 2-pack figure, though the hands swapped without a problem here. I really like this figure better than the 2-pack version. The colors are just so much cooler! McCree is definitely one of my favorite Overwatch Ultimates figures of the year and is easily an Epic toy. There aren't many cool cowboy toys available these days but this one is a real winner. Overwatch Ultimates has gotten to be one of my favorite lines this year and I'm always excited to pick up some new figures from it! Go out and grab McCree. He won't let you down!


If you're a fan of McCree, I've also reviewed the 2-pack exclusive McCree (White Hat).