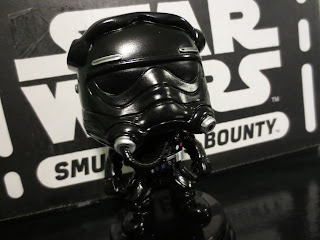 We're less than a week away from the release of Star Wars: The Force Awakens and I'm continuing my countdown to this very special event with a look at another Star Wars figure from the new film. This time it's the POP! Star Wars Tie Fighter Pilot #89, an exclusive POP! included in the new Smuggler's Bounty delivery service from Funko. Ready to dive right in to this review? Then join me after the break... 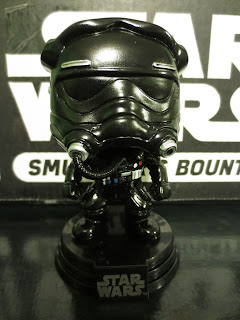 Non-Scalper Price: Included with the November 2015 Smuggler's Bounty box. The box includes this and one other POP! along with a Stormtrooper lanyard, a Kylo Ren pin, a Tie Fighter Pilot patch, and a t-shirt. 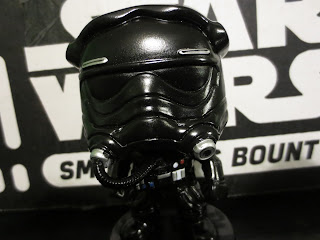 *I always think that Funko does a nice job sculpting their POP! figures, particularly when they have a character wearing a mask or armor. From what I've seen this is quite an accurate portrayal of the First Order Tie Fighter Pilots from The Force Awakens. The black paint work looks great in person as it has a nice shine to it, although it did make photographing this POP! a real pain. 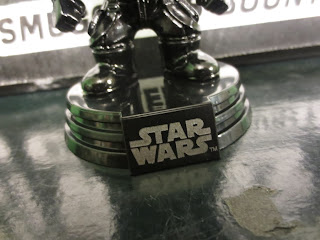 * I wasn't aware that the Star Wars POP! figures came with little bases. I assume these are supposed to help keep the figures more stable since they're bobble-heads, unlike most other POP! figures. They're really sharp looking, though, and the Tie Fighter Pilot stands securely on top of it. 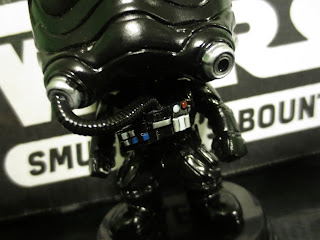 * The only thing I'm not wild about with this POP! is the way the chest panel was handled. Since the head has to move due to the bobbling feature (which probably makes these legally distinct under licensing contracts from the toys that Hasbro releases) chest panel is attached to the head via the oxygen tube and floats over the chest. It would look fine except for the fact that the cord on my figure is very uneven. It's tough to see in this picture but the panel is angled about 45 degrees to the right. 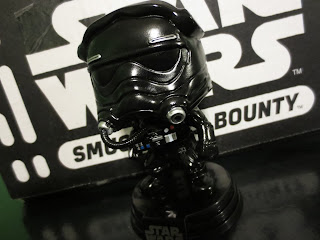 I really like this guy. The Tie Fighter Pilot has a great look to him and feels like a nice, solid quality figure. He's very well done and, other than the oddly placed chest panel, is a great caricatured display piece. There are apparently two different Tie Fighter Pilots in the November 2015 subscription box (the other is labeled as #90 and has red stripes on the helmet). This guy gets a Good and a 1/2 rating from me. If you're working to build a collection of First Order trooper POP! figures, you're going to have quite a challenge due to the number of exclusives. Good luck!

If you're a huge fan of TIE Fighter Pilots, I have reviewed the Star Wars Black Original Trilogy version: TIE Pilot

If you're interested in POP! figures, I've reviewed a few others: