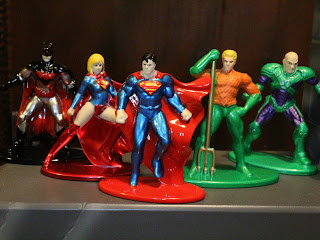 A few days ago I looked at the DC Nano Metalfigs Pack A and now I'm checking out Pack B! (There isn't a Pack C yet, so you'll have to just keep wondering what my next review will be.) Filled with some absolute A-list DC Comics star power, Pack B includes Superman, Supergirl, Aquaman, and exclusive figures of Lex Luthor and Batman. Thomas Wayne as Batman from Flashpoint, to be precise. Yup, that is indeed very, very cool. I'm really liking these little minifigures, especially considering they're about $1 each and made from die-cast metal. Let's take a closer look at this roster after the break... 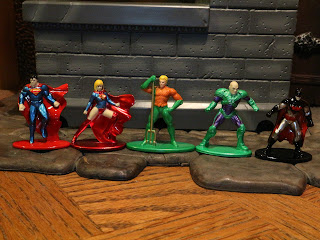 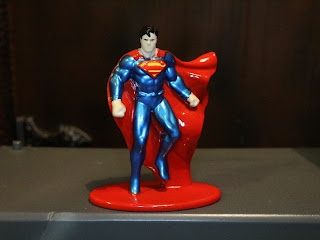 * While he's based on the New 52 look for Supes, this is still a pretty classic looking minifigure of the Man of Steel. The colors, the pose, the little tiny spit curl: Brilliant! I'm really digging the look of this guy. While I do think he'd look better with some red trunks and red boots, I still like what I'm seeing here. 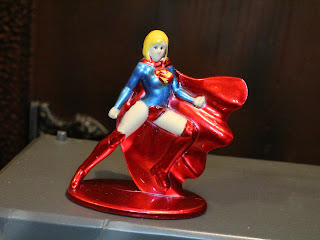 * I like this Supergirl minifigure, but she is actually a duplicate for me since I purchased the single carded figure the first time I found these. Here's a link to my original review since they are exactly the same. There seem to be quite a few figures in these sets  that you'll end up with duplicates of (there are also 10 and 20 packs, although I haven't seen them yet) which is always frustrating to me. 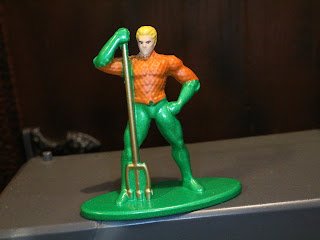 * I'm 50/50 on Aquaman. I dig the pose, I love the work on his scales, and the paintwork on his head is pretty impressive. I do think there is just too much green on his legs, though, which probably is augmented by the amount of green of the base. The trident is also kind of weird. It's not all gold; there is a lot of unpainted green running up the sides, which looks really off. 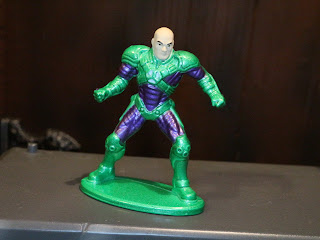 * Lex Luthor is sporting his battle armor from the New 52 and it looks great. While the color schemes on these figures are pretty simplistic, the purple and green here look awesome with very clean paintlines. The metallic paint is just excellent. 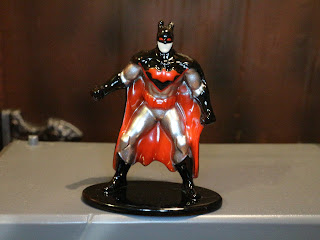 * Last, and certainly not least, is Batman. Thoma Wayne as Batman, to be exact. I love this costume and it's cool to see this here. He shares the same sculpt as the DC35 Batman from Pack A but has a very unique paintjob. I'm really excited to see this figure here, and I'd love to continue seeing more story specific characters as this line continues. 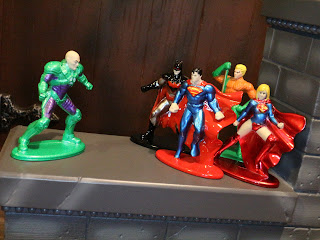 Pack B is another win. While Aquaman is a fairly weak figure, everyone else is pretty impressive, particularly Superman and Lex. While I wish I had known what figures were available so as to avoid duplicates (when I saw these set I only owned three figures, so I was able to largely avoid duplicates) but it does make for a somewhat frustrating experience. Still, the lower price point does make this a bit more acceptable. This is another Great set that definitely feels worth the money.

For Supergirl, the only other reviews I've done are the single packed DC Nano Metalfigs Supergirl and the Supergirl from the DC Super Hero Girls Action Pack six figure set!

Currently the only other Aquaman figure I've looked at is the BvS Multiverse Aquaman.

The same goes for Lex Luthor: The only other version of this character I've looked at is the BvS Multiverse Lex Luthor.

While I haven't reviewed any other Thomas Wayne figures, I have reviewed so many Batman figures that the Caped Crusader gets his own action figure archive. Check it out here!