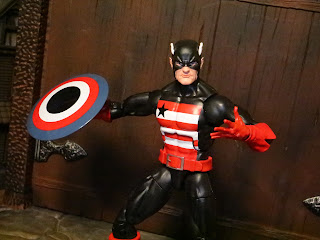 When it comes to Marvel Legends collecting my two main interests are X-Men related characters and comic versions of characters who have appeared in the MCU, so the last few months have added plenty of characters I really wanted to my collection. When John Walker appeared in last year's The Falcon and the Winter Soldier I started checking prices on the last version of U.S. Agent (from 2012) and decided I was going to wait, assuming Hasbro would get around to the Captain again. They did! The last few months have been a crazy time for Marvel Legends figures and while I've reviewed quite a few of them, including a few as part of 31 Days of Toy Terror 2022, but today starts a marvelous Marvel Legends mini marathon. Heck, it might just be a full on marathon. I picked up U.S. Agent back in late September, shortly before I reviewed his fellow series-mates Madame Hydra and Quake, but it's taken me this long to get around to him. Let's take a look at John Walker, U.S. Agent, after the break... 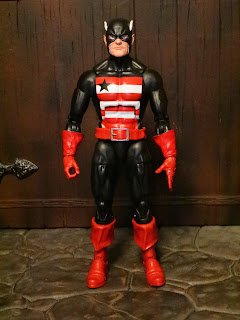 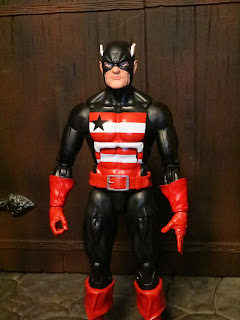 * I remember seeing the old Toy Biz U.S. Agent as a kid and thinking his black, red, and white Captain America styled outfit was quite striking. It still is. The red and white really stand out against all of that black, creating a look that seems far more menacing and authoritarian than Cap's red, white, and blue. John Walker uses a body that's been around for a bit (the Walgreens excusive Punisher used it, as have many other versions of Cap) but it works well here. He's got the oversized gloves and boot cuffs, like a pirate, and the belt is a separate piece. Not removable, but separate.

* The portrait shows U.S. Agent in a standard Captain America styled hood but with no "A" on his forehead and a really sour, grumpy expression on his face. 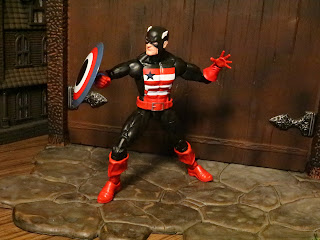 * While Walker uses an older body, it still works just fine. The articulation is excellent, the plastic quality feels nice and sturdy, and you can have lots of fun posing him in multiple ways. Most Marvel Legends figures are of a very high quality, so you probably know what to expect here. 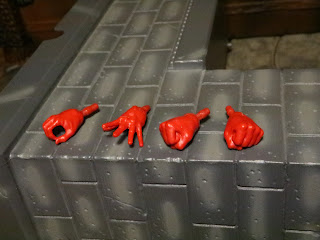 * Four different hands are included: A right handed closed grip, an open palmed left hand, and a pair of fists. I really wish John came with some standard grips so he could hold the shield different ways, but what's here swaps out easily enough and gives you a few decent options. The closed grip right hand works well for holding the peg on the shield for something of a shield throwing pose. 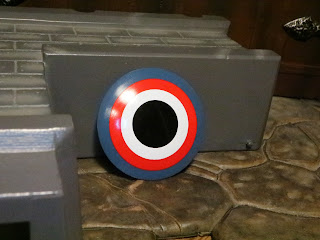 * U.S. Agent's shield is a standard shield that we've seen in the Marvel Legends Series plenty of times. He does have some blue here, kind of a bluish-gray, along with red, white, and black. It's a clean paintjob and a sturdy accessory. 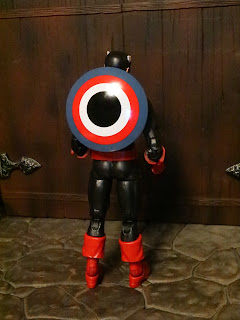 * There's a peg on the back of the shield and a hole on U.S. Agent's back (it's in the middle of a white star painted on his back), so you can have him store the shield when it's not in use. 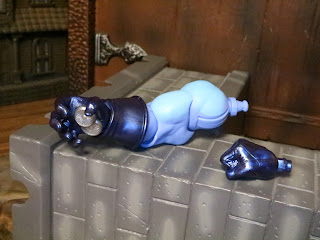 * This series has a build-a-figure of the Controller and Walker comes with the right arm as well as an extra hand. I'm not really planning to build the Controller so if you're interested in the pieces let me know. 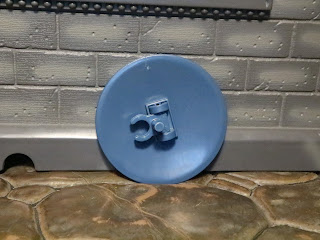 * I really wish these shields had actual straps of some sort rather than a clip. Using that small wrist clip just seems like a recipe for a broken accessory in the near future. 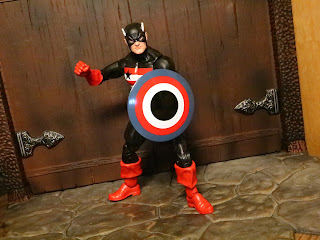 U.S. Agent turned out to be a pretty nice looking figure but he kind of feels very bare bones. No hands for actually holding the shield? The previous releases of the character usually came with a firearm of sorts, too. Where's something for this guy? He's not a bad figure, but he could have been so much better. He gets a solid Good rating from me. I am glad that Hasbro put John Walker/ U.S. Agent back on shelves, though. Shop around right now and you might even find a deal on him. With U.S. Agent slated to appear in Thunderbolts in 2024, we're likely to see more figures of the character if you're down for waiting.
This is the first figure of John Walker/ U.S. Agent that I've reviewed. For more Marvel Legends Series reviews check out the following:
Marvel Legends Series by Hasbro (2016)
Binary
Crossbones
Darkstar
D'Spayre
Enchantress (Mystic Rivals)
Firestar
Frog-Man
The Hand Ninja
Madame Hydra
M.O.D.O.K.
Nico Minoru (Mystic Rivals)
Quake
Ultron
Ursa Major
Marvel Legends Series: Avengers by Hasbro
Taskmaster