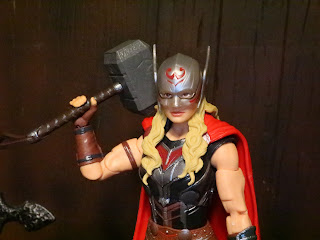 I don't usually pick up the actual movie based figures (I prefer the comic versions of characters who have appeared in the MCU) but a week or two ago I was at a local bin store and scored Jane Foster as the Mighty Thor for less than $5 bucks. Considering she's a pretty cool figure and it's based on buff Natalie Portman as Jane Foster, I snapper her up. Man, I've been finding some crazy deals at the bin store! I liked Thor: Love and Thunder. Tonally it was odd at times, jumping back and forth between abject silliness and some of the darkest moments in the MCU, but overall I enjoyed the ride. Natalie Portman's turn as Thor (or the Mighty Thor) was definitely one of the strongest parts of the film and a nice next step/ finale for the character. I didn't pick up any of the other Thor: Love and Thunder Legends due to having no interest in them and I passed on the Mighty Thor originally since I already own the previous comic version, but, again, this figure for less than $5 bucks was hard to pass out. Let's check out Jane Foster as the Mighty Thor after the break... 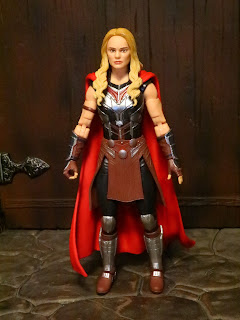 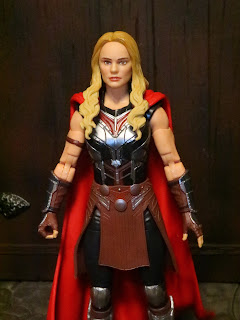 * Jane's outfit as the Mighty Thor is quite faithful to her look in the comics. Similar colors, similar design; really, the biggest difference is just the more intricate "movie" styling. She's a fantastic looking figure with lots of paint applications to bring out all of the details. I also like that she looks taller and more muscular, like she appears in the film. While Natalie Portman definitely worked on her arms, a variety of tricks were used to make her appear 9 inches taller so she would be more imposing. Hasbro only had to sculpt a larger figure, though, and they did well. 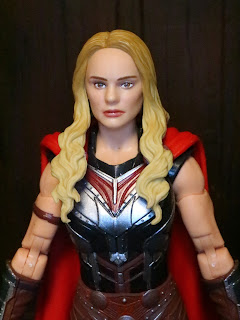 * I think the portrait looks quite a bit like Natalie Portman. The hair color throws it off a bit (her hair isn't as yellow in the film) but the likeness is really good, especially in hand when you can move the portrait around and look at it from different angles. I do wish they would have given Jane a bit of a smile, as she was usually pretty thrilled to be in her powered up Thor persona, but it's solid work still, particularly on her eyes. 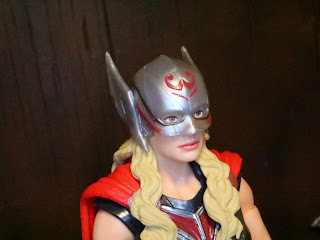 * Jane's Mighty Thor helmet covers the top half of her face, keeping her identity a "mystery" to those not in the know (spoiler: We all knew who this was). It's another part of the design that's quite accurate to the comic appearance of the character and it's pretty accurate to the film, too. You can even see Jane's eyes peering out from the eyeholes. She's ready to mess someone up. Hey, she never said she was a role model. 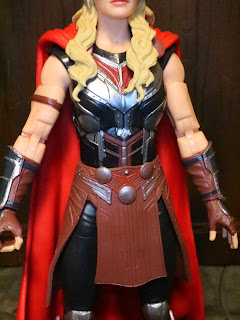 * Here's a closer shot at Jane Foster's armor, just to show off the intricate detail here, particularly on the gloves and bracers and the waist piece. The details are etched into it and there are lots of individual paint applications on the armored bits. 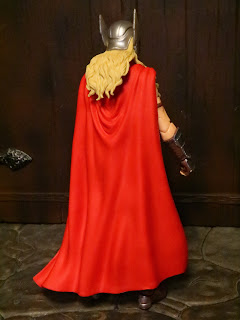 * Jane's cape is pretty nice. It's plastic, not fabric, but it looks good and doesn't impede her movement too much unless you really try to get her in a low stance. 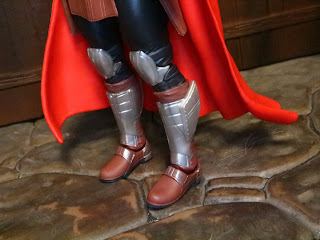 * Her boots are excellent as well. Hasbro really does a great job with most of the MCU based figures and, even though I don't pick up many of them, I appreciate the work. I like the wing-like designs on the side of the shin guards. Very Norse. 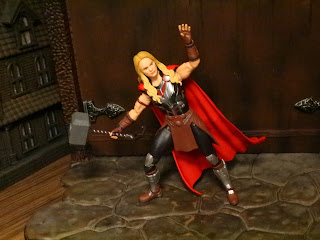 * Most of the MCU based figures are just as well articulated as their comic counterparts, so Jane Foster can move and fight just like any other figure. Since she's an all new body she has solid, tight joints and a great range of motion. The mid-torso balljoint really helps get her into some great poses, as do the double hinged elbows. 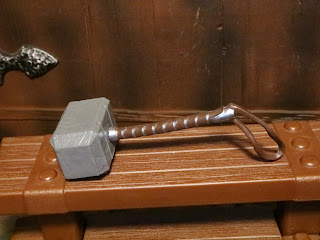 * Mighty Thor comes equipped with Mjolnir. It's a new sculpt for the hammer as the head of the hammer looks like it has been shattered and reassembled. the paintwork on the handle is fairly ornate. It's heavy, but Jane can hold it quite well. 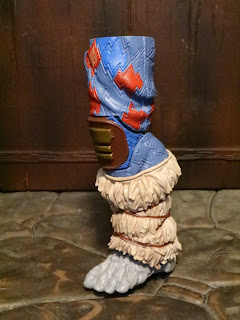 * The left leg of the Korg Build-a-Figure is included, so if you're planning to build Korg, here it is. I'm not, so if you're interested let me know. We can work something out. 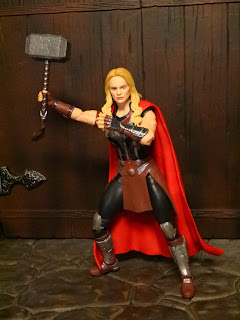 I'm actually surprised by how well Jane Foster as the Mighty Thor turned out. She's excellent! An all new body sculpt, detailed paintwork, a new Mjolnir, and two portraits really makes her a very solid release from Hasbro. Throw in the Build-a-Figure piece, whether you're building Korg or planning to sell or trade it, and you've got a hit. Both the Doctor Strange in the Multiverse of Madness and the Thor: Love and Thunder movie figures seemed to disappear or be clearanced from store shelves fairly quickly, in some cases even before the films came out. I only saw Jane once or twice at retail before the film was released and never after its release. I'm quite thrilled to have found her at the bin store I picked her up at, particularly for less than $5 dollars. She definitely seems to be the hit of this series and she's Epic enough to back it up.
This is the first figure of Jane Foster I've reviewed but, if you consider this a version of Thor, I've also reviewed the Marvel Legends Infinite Series Thor from the Allfather series.