Action Figure Review: Whiplash from Masters of the Universe Origins by Mattel 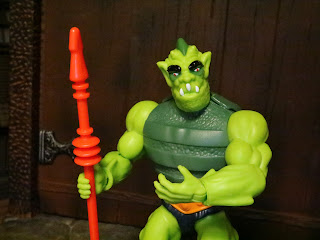 Since so many of my vintage Masters of the Universe figures were acquired at such a young age (I wasn't born until 1983), I can't always recall when I received certain figures. I'm pretty confident I received Whiplash for Christmas one year, probably in 1987 or 1988, so after the line was already dead, but I was a kid and I loved them. I received the Fright Zone for Christmas 1988 and I'm pretty sure I received King Randor, Snout Spout, and the Slime Pit for Christmas in 1989, so Whiplash could have been either of those years. Whiplash was never one of my absolutely favorites, though. Despite being a walking crocodile man, he always seemed kind of dull to me. Man, you can tell MOTU is pretty wild when a walking crocodile man is viewed as a bit dull, huh? I love Whiplash's color scheme, though, and I'm thrilled that he's finally made it into Origins. Just counting action figures, all of the vintage series 3 figures have now been released in Origins (though I don't yet personally have Kobra Khan and Mekaneck), so that's kind of a big deal. I've really been hoping for a Masterverse Whiplash with his Motherboard cult outfit, but for now we've got this classic version. Whiplash is currently the last figure in this mini-marathon of Masters of the Universe Origins reviews so let's give this Caligar a few minutes of our time after the break... 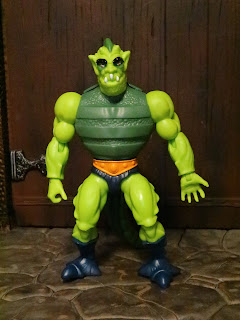 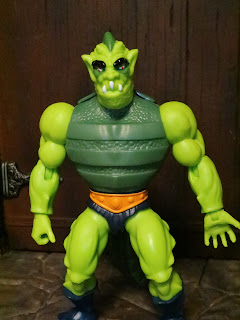 * Whiplash is another figure that looks almost identical to his vintage counterpart, just a bit brighter. I love the shades of green on him and the use of the Buzz-Off parts to give him that rough, armored appearance. 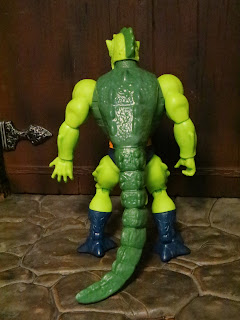 * The back of Whiplash shows off his massive, armored crocodile-like tail. While the vintage figure had a rubbery tail, like Rattlor, the Origins Whiplash has a very solid and sturdy tail. It doesn't swing like the vintage tail does (the vintage tail used rubbery material for the tail so it would look like it was "swinging" when you used the battle waist feature) but it looks better and is way sturdier. 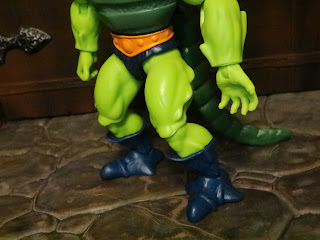 * Here's a closer look at the various weird fins and ridges on Whiplash and his funky boots. Cool stuff 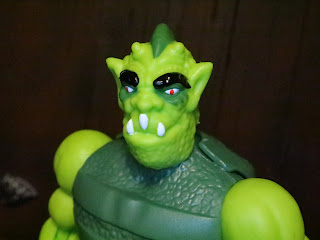 * Whiplash is a wild looking guy who for some reason reminds me of Spike from Super Mario Bros. If Spike had been in the 1993 Mario Bros movie, he might have looked like this. The portrait is pretty faithful to the vintage toy complete with huge eyebrows and the weird teeth. Where is that top tooth coming from, anyway? 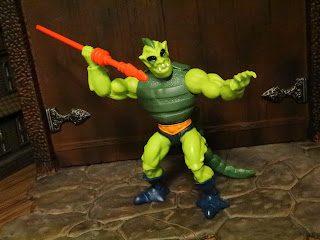 * The MOTU Origins figures are built like the vintage toys but with more modern articulation. While their bulky frames make the articulation a bit clumsy, they do feel like an evolution of the vintage line. Imagine what you would get if you mixed a vintage figure with a MOTUC figure. They're quite fun to play with and they feel very sturdy. Plus, Whiplash has that extra tail joint, so that's a plus.
* They're also modular and can be easily separated to make your own lazy boy customs! 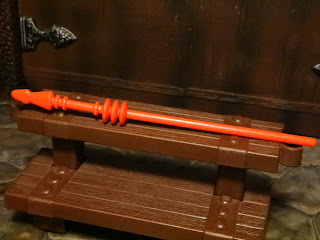 * Whiplash's tail is usually his primary weapon, so his spear is just something he messes around with. Like the vintage toy, Whiplash comes with the Castle Grayskull spear molded in orange plastic. It's bright and stands out and kind of matches his belt. 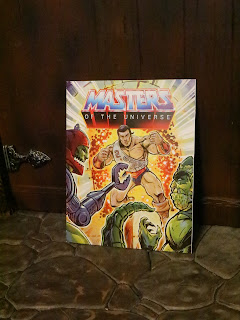 * This comic is titled "Mind Over Matter" and, as you can see, there is no title on the cover. This is actually the international version of the figure, so the comic has no words inside nor is there any unique text on the back. The art is still really good, though, and it features the other characters from this series (King Randor, the minicomic Trap Jaw, and Digitino) in a story where the villains attack Eternos palace shortly after Man-At-Arms and Digitino have worked together to create a portal system between Trefixa and Eternia. 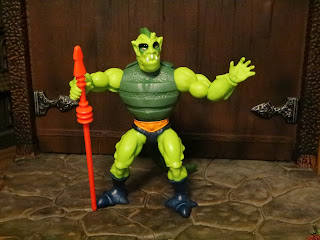 You know what? Whiplash is pretty excellent. He takes the vintage character, adds in some more modern articulation, still retains the charm of the original toy, and improves on the original by adding in a sturdy, solid tail. Whiplash was never one of my favorite vintage figures as a kid but this Origins version has won me over. He's an Epic figure and has been executed wonderfully. I'm still looking for King Randor from this series and I have high hopes for him, too. Origins has really had a great year and 2023 looks to continue this line's quality and amazing depth of character selection.

If you're down with Whiplash check out my reviews of the 200x Whiplash, MOTU Revelation Eternia Minis Whiplash and Metallic Whiplash, the POP! Whiplash #82, and the Super7 M.U.S.C.L.E. Whiplash minis from the #1 Masters of the Universe set (Green) and the flesh colored series 1 Whiplash.