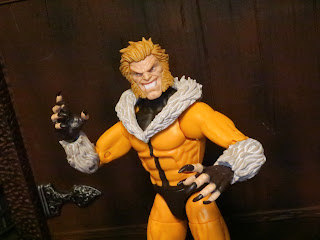 It's time for part 3 of "How I ended up getting Bonebreaker even though I wasn't terribly interested in this series," so check out part 1 for the full setup. Anyways, after getting four of Bonebreaker's parts and the accompanying figures for cheap (I sold off Darwin and Vulcan) I had to decide whether or not I was going to try to pick up the remaining pieces individually or if I was going to pick up the final two figures. I found a solid deal on Sabretooth which was cheaper than buying the parts separately, so I went ahead and ordered him. I already have the Jim Lee era Sabretooth from the Apocalypse BAF series, but this guy kind of appealed to me and I figured he'd either make a nice companion to the first appearance Wolverine figure (even though they didn't battle then) or I'd just sell or trade him off. This Sabretooth is an interesting figure. He seems to be based on Sabretooth's earliest appearances in comics where he battled Iron Fist, Luke Cage, and Spider-Man, but his head looks more modern, like something from Wolverine: Origins. He's an interesting amalgam of different looks for Victor Creed that some folks will inevitably be frustrated by. He's a recognizable villain, though, so you can't blame Hasbro for using him (long with another Wolverine variation) to help anchor a wave of not as recognizable mutants. Let's take a look at this version of Sabretooth after the break... 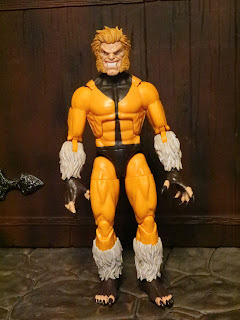 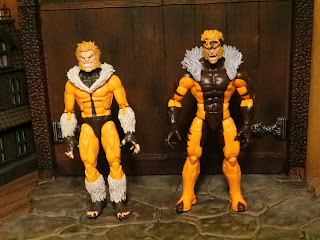 * This version of Sabretooth is on the left while the Sabretooth from the Apocalypse BAF series is on the right. They don't share any parts and are quite different figures. This guy's much smaller than the previous one and, while still muscular, comes off as a bit lanky. 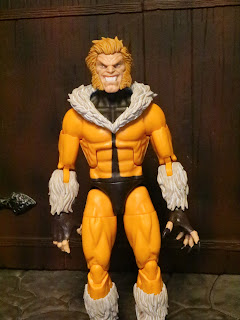 * While I like Sabretooth as a huge, vicious bruiser, this is a pretty cool looking figure. He's still muscular but not overly massive. The detail on his muscles is really well defined though most of his costume is simply conveyed via paint. It's the big furry collar and cuffs on his gloves and boots that really give him his character, though. They look really good and add some depth to the guy; they're not filthy or anything, but not pristine, either. The collar on his chest is removable but there's no real reason to take it off. It stays in place well and makes Sabretooth feel like far more than just a new head on a repainted body. 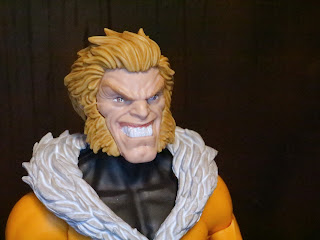 * That headsculpt is incredibly wild. I love it! Sabretooth just looks so wild and unhinged with his crazy hair and his animalistic sideburns. And that crazy grin? It makes me think of what we might get if Willem Dafoe played Sabretooth. Honestly, I'd kind of dig a MCU thing where Willem Dafoe played different Marvel villains. Green Goblin? Yup, he's done that. Sabretooth or Magneto? Absolutely. Doctor Doom. Heck yeah. Willem Dafoe as Kraven the Hunter? Bring it on! It'd be insane. 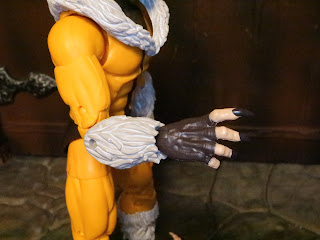 * Sabretooth's fingers are very claw-like here and they look fantastic in multiple action poses. he's sporting fingerless gloves, which seems to be a unique look for the guy, but he's also got that well sculpted and detailed fuzzy wrist collar to keep his forearms nice and warm on those cold, Canadian nights. 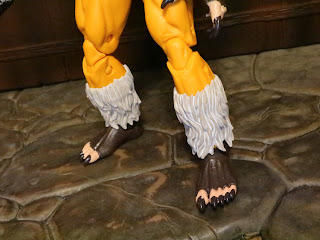 * His toes have the same claw-like nails on them and the same shaggy fur functioning like boots. 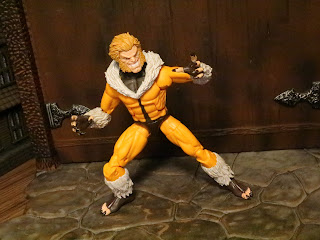 * While I think Sabretooth is based on an older base body, everything works nicely and the new parts of the figure blend together seamlessly. Sabretooth is just a really fun figure to mess around with. I loved the vintage Toy Biz Sabretooth as a kid (the one with glow in the dark eyes and the "healing" action feature) and I get something of the same feeling fooling around with this toy as I got from playing with that one. This one's more durable, though. 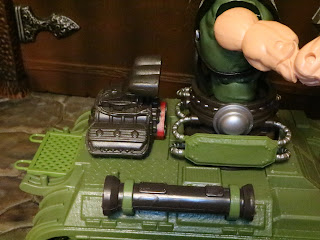 * Since the main reason I picked up  this series was to build Bonebreaker, his BAF parts are a big part of the figure to me. Sabretooth comes with the little green grate on the left, the engine piece in the middle, and the waist piece that attaches Bonebreaker's torso to the tank. 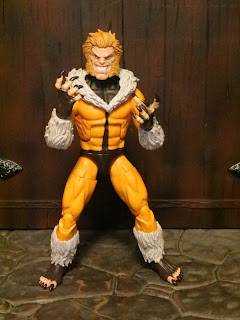 I was surprised by how much I like Sabretooth. For being an odd mishmash of different looks for the character from different eras, he sure is fun. There's some excellent sculpting here and some really nice subtle paint effects on Sabretooth's furry collars and such. He's a Great figure and one of my favorites in the set. I really wish he had come with some alternate hands or something, though. You know, something to give him a bit of variety. And I really want an update of his weird orange claw weapon from the Toy Biz days. Still, there's a lot to like here and I ended up liking Sabretooth so much I decided to keep him and not just sell him off after taking the Bonebreaker parts. Bonebreaker is coming soon but I've got one more figure to review before I get to him...
This is the first figure of Sabretooth/ Victory Creed I've reviewed. For more Marvel Legends Series reviews check out the following:
Marvel Legends Series by Hasbro (2016)
Binary
Crossbones
Darkstar
D'Spayre
Enchantress (Mystic Rivals)
Firestar
Frog-Man
The Hand Ninja
Madame Hydra
M.O.D.O.K.
Mojo
Nico Minoru (Mystic Rivals)
Quake
Sleepwalker
Ultron
Ursa Major
U.S. Agent
Marvel Legends Series: Avengers by Hasbro
Taskmaster