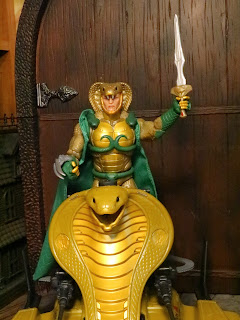 I've had Serpentor in hand for about a month now and while I originally intended to have him posted for Christmas day, well, that didn't happen. You see, I received the vintage Serpentor figure on Christmas back in 1987. I was four years old and it might be the first Christmas I truly remember. Since my dad managed retail, we rarely went away for Christmas but that year we went to visit my relatives in Ohio. We spent Christmas Eve with my maternal grandma and grandpa ( I remember getting the Bionic Six Secret Headquarters) and then went to my aunt's house on Christmas day where my paternal grandma joined us. I remember her buying me lots of G.I. Joe figures, so maybe she thought it was some way to help connect me to my grandpa who passed when I was only two or so (my paternal grandpa, Pappy, was in the Army in World War 2 and the Navy during the Korean War), or maybe they just weren't as weird to her as the Masters of the Universe? Who knows. I remember getting Serpentor at my aunt's house along with Ecto-1. When we got home that night (we lived outside of Cincinnati at the time) I remember getting the Fright Zone, the G.I. Joe Mobile Command Center, and the original Nintendo Entertainment System, though that was more of a gift for my dad at the time I think. Anyways, despite being a key part of the Cobra legions (and a crazy part of the animated movie and the Marvel comics storyline), Serpentor first stands out to me as a Christmas gift. The Classified Series version of Serpentor is another figure with minimal updates; he's a snake themed armor clad warrior. He's not exactly outdated, so it works here. All of the detail is just upgraded. He does have better accessories than the original figure, however, so that's a huge plus. He was sold through Hasbro Pulse during the PulseCon 2022 and started shipping in November. Ready to ride with Serpentor? Then join me after the break... 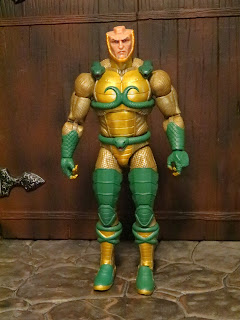 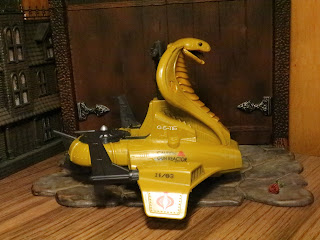 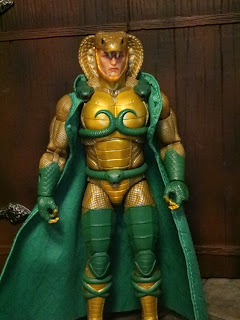 * Serpentor is a pretty impressive looking figure. He looks different from the other Classified Series figures, but he's supposed to. He's... different. Rather than a soldier, or a terrorist, or a flamboyant arms dealer, or even a crazed biker, Serpentor is an old time august general. He's a battlefield warrior and an emperor, clad in his most regal attire. The vintage Serpentor was an unusual looking figure as well and Hasbro has captured the look of the vintage figure perfectly, but turned the design up to eleven, showing off each scale of his serpent inspired armor. Clad in different shades of gold and bronze with green, Serpentor definitely stands out in your collection, and whether you want him to rule Cobra or tear it apart like in the comics, causing a civil war, he's noticeable on your shelf. 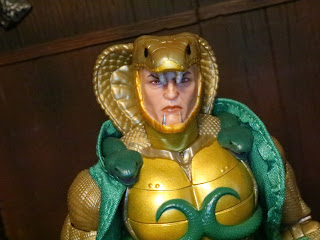 * Serpentor looks... displeased. Not outright angry, but not stoic, either. He looks like someone who expects to get exactly what he wants when he wants it. While you might call him handsome, there's a lot of character in his face, too. His eyes are piercing, almost snake-like in their intensity, and he looks a bit rugged at his base. Despite his regalia, he's still a warrior at heart, at home on the battlefield. The snake hood and top of his helmet are separate pieces which can be removed to add on a second hood. This one's a bit more ornate, and perhaps intended to look a bit more like the vintage toy. 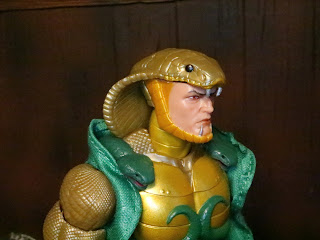 * The second hood and helmet for Serpentor is actually one solid piece. It's sleeker and has a smaller profile to it. The design of the scales is also a bit simpler as well. 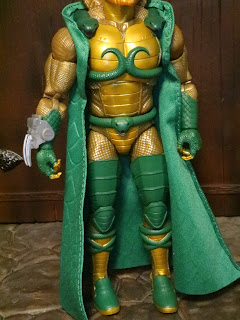 * Here's a close up shot of Serpentor's armor so you ca admire the amount of work. The snakes wrapped around his shoulders and used for his belt are nicely rendered here. They're not separate pieces but the paint work is neat and clean. The different colors of his armor also gives off a snake-like vibe, particularly due to the gold color of his main torso covering and how it's more segmented looking than everything else. It's a really detailed, ornate outfit and Hasbro's team brought their A-game. 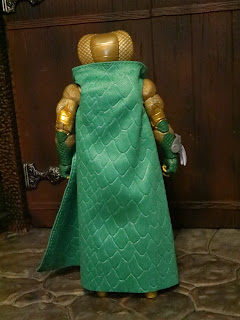 * The cape is super nice. I remember the vintage cape was kind of shimmery and shiny, definitely a piece you wouldn't exactly connect with G.I. Joe if you saw it on its own apart from Serpentor. It was also kind of fragile, too. This one is made much better and has a fantastic snakeskin print on it. Look at that! There's also some elasticity to the material so you can get it over Serpentor's arms more easily. 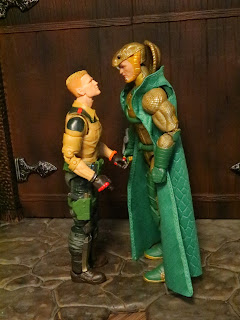 * Serpentor is big. Tall. Built. Seriously, he's taller than Roadblock. He's a big, imposing guy and definitely stands out as the genetic masterpiece that he is. He might have the genius of Napoleon, but he doesn't have his stature. 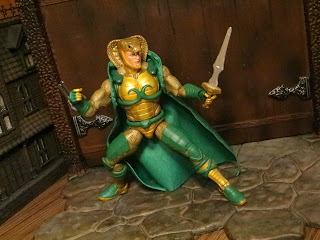 * Serpentor's articulation is as solid as any of the other G.I. Joe: Classified Series figures with plentiful articulation and a high quality build. He looks great inspiring the Cobra legions or fighting against the G.I. Joe team in a variety of different poses. 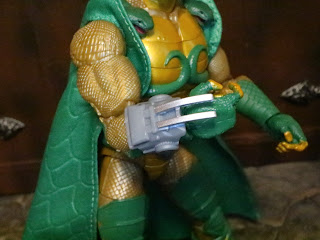 * Serpentor does have a cool upgraded feature of a claw on his right forearm. There are two separate pieces: One with a shorter claw and one with the claw fully extended. Here's the shorter claw... 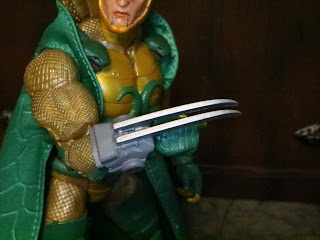 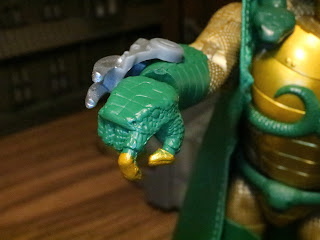 * Serpentor is also sporting snake gloves. Cobra Commander just likes the snake motif, but Serpentor bought in to the whole design philosophy. He has ensconced himself in serpents. 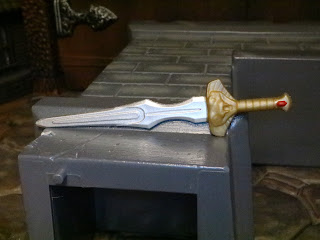 * Serpentor's sword is very cool. Jeweled hilt, cobra face on the guard, and a stylish blade. 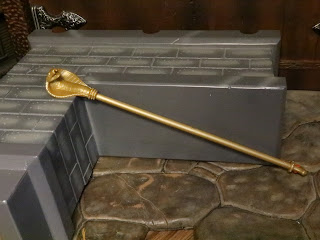 * He also has a very regal looking staff with a snake on top. I'm sure some folks will be stealing this for Cobra Commander. Maybe you ought to have the two battle over it. 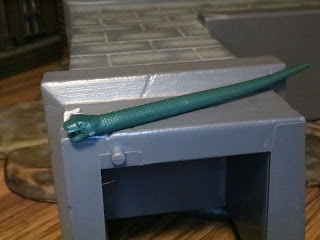 * Serpentor also comes with one of the "snake spear" things he uses in the animated movie to totally not kill Duke ("Doc says Duke's gonna be A-OK!"). They do look like the details on his costume, so maybe in Classified he keeps them as concealed weapons? 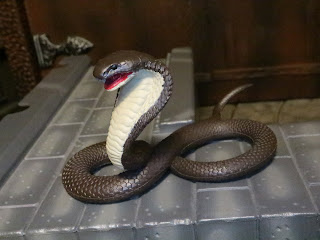 * Last up for Serpentor is an absolutely terrifying king cobra companion. This guy is really creepy. Seriously, he gives me the willies. The sculpt is excellent, though, and the paint job is admirable. He's far more than just a molded plastic snake for sure. 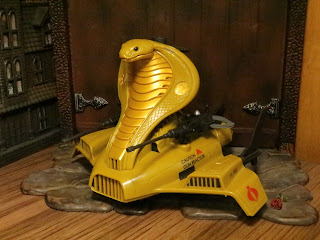 * Let's talk about Serpentor's Air Chariot now. It's the third or fourth vehicle in the line (some people got the Tiger Force R.A.M. Cycle before this one) and it's pretty faithful to the vintage toy. The color looks really nice and the body feels good and sturdy. The vintage toy was rather fragile in places but this one feels like you could chuck it at someone's head and leave a mark. Don't do that! Just know that you could. 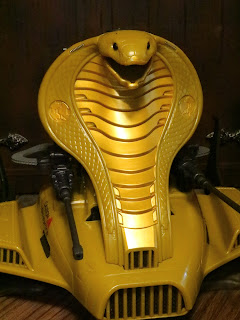 * The steering controls are covered by a giant king cobra head that functions as a shield and headpiece for the vehicle. There's a lot of detail on the armored plates here and a giant snake head. There's not much assembly required here but you do have to pop on the front piece here, and a few of the black fins on the back. 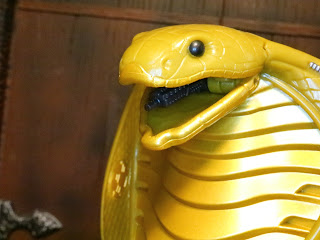 * The snake head has a hinged lower jaw which opens to reveal a small machine gun inside. The gun is on a hinge as well. That's a cool little feature and the kind of upgrades I love in the Classified Series. 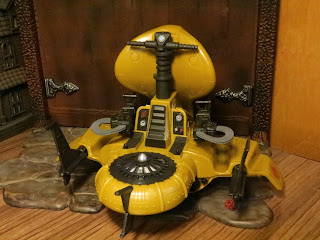 * From the rear you can see that this thing is outfitted with lots of extras: A steering vane, a rotary turbine, and some various fins for better performance. 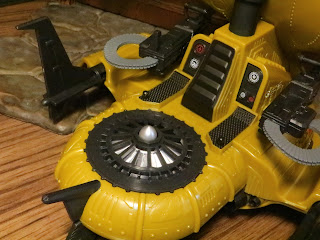 * The turbine does rotate, although there isn't a rod to help you spin it. There is also a control panel with various dials and gauges. 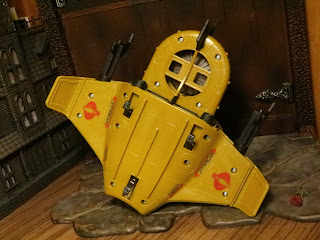 * Flip this over and there's lots of printing on the bottom (no stickers to put on; this is all on the vehicle out of the package) and three struts that flip down to allow the vehicle to stand off of the ground a bit. 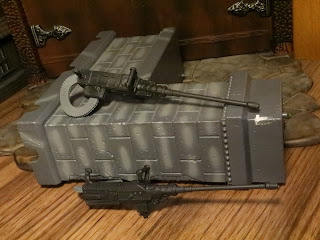 * The machine guns on the sides are actually removable and can be used by Roadblock or anyone else with the strength to carry them. They're pretty cool accessories with removable barrels and a hollow port in the barrel for attaching firing effects. 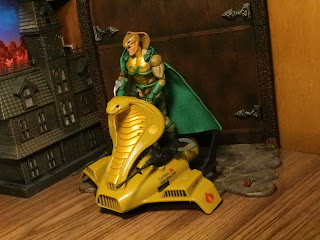 * Serpentor rides his air chariot with ease. He can hold the controls snugly and stays on firmly thanks to two footpegs by his feet.

* I don't think it looks ridiculously undersized or anything but I do think the chariot may be just a little small. It'd probably look a bit better scaled up just a bit, especially since Serpentor is so huge. 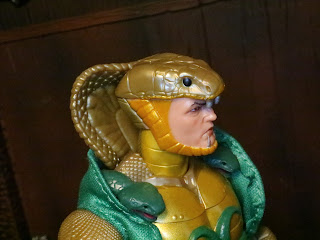 * Sometimes the snake helmets on top of Serpentor's head don't quite line up, so take care and make sure you get it tight and in place. I also wish that the snake fangs on the lower helmet (around his chin) were separate from the sculpt. I don't like that they blend in with the face the way they do. 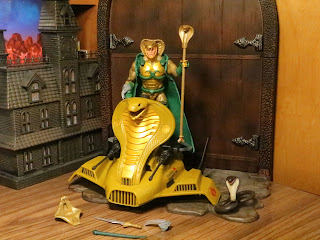 Serpentor turned out wonderfully and is one of the most exciting releases of the year. He's expensive, yeah, but he's really cool. As a figure himself he definitely rocks, though. The Air Chariot is quite cool and nicely designed, but it feels like a few more features like a flight stand or the ability to actually rotate the turbine were needed to really make this thing feel like a deluxe release. Still, it's a Great set and I imagine most G.I. Joe fans, except for the staunchest haters of Serpentor and Cobra-La, will want to add him to the collection.

If you're feeling compelled to check out more Serpentor reviews I actually reviewed the G.I. Joe 25th Anniversary Serpentor year ago at MWCtoys.com.