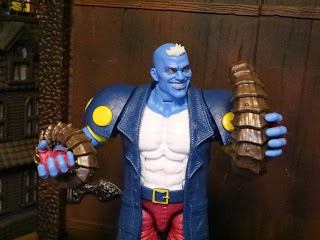 Where to start? Well, while the X-Men is one of the two major themes of my Marvel Legends collecting, I do have to admit that my X-Men fandom is mostly confined to X-Men comics from prior to the mid-late 1990s and characters I know from the films. That being said, the most recent X-Men series didn't really appeal to me that much. Most of the characters were folks I had plenty of (Wolverine and Sabretooth) or characters I wasn't overly familiar with (Maggott, Vulcan, and Darwin). The Build-a-Figure, however, is Bonebreaker, a character I love. Yeah, he's cool in the comics and all, but not a heavy hitter or anything. But that vintage Toy Biz figure? He was one of my favorites an the Legends figure seemed to be incredible. Still, with this series of Legends jumping up to the $24.99 price point and with a cast of figures I mostly didn't want, I skipped over these when they released and just waited, assuming that someday I'd get a Bonebreaker at decent price. One day last month we hit up one of those bin stores near us and I discovered they had some amazing action figures in stock at crazy prices. I walked away with Vulcan, Siryn, Darwin, and Maggott for $10 each. An acquaintance was glad to take  the Darwin and Vulcan figures off my hands for $10 bucks each, so I now had four of the six figures needed to complete Bonebreaker. I was going to sell Maggott but I'll admit that I liked the look of the figure. Honestly, the biggest reason I recognize Maggott is from him being announced as one of the X-Men Flying Fighters figures in ToyFare magazines and other fine action figure publications back in 1998. The series was cancelled, however and folks were pissed at the time. I figures that he looked cool and kind of gave me a nostalgic feeling as a "toy that got away" from back in the day, so I kept him. Here he is now for your review reading pleasure... 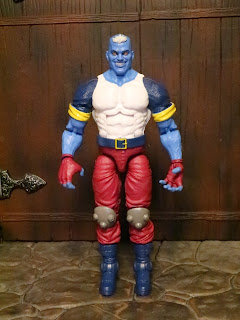 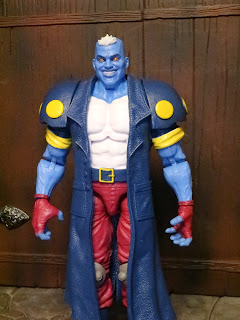 * Sometimes you just get a figure who's kind of cool looking and, despite not knowing who they are, you just dig their vibe. That's how I feel about Maggott. He's wearing a pretty cool outfit, has a great expression on his face, has blue skin, and just looks like a tough fellow. Hi real name is Japheth and he has a slug based digestive system. Yes, that's correct. He has two... mechanical slugs... that come out of his body, eat stuff, and deliver the energy back to him. That's probably the weirdest mutant power I've hear of. I just... I don't know. That doesn't even seem like it would make sense as a mutant ability, does it? Anyways, as a figure, Maggott looks really cool. The colors are really quite bold and there's a lot of painted detail on his unqiue outfit. He's definitely not just a base body with some painted detail; stuff like the belt, his knee pads, his cool fingerless gloves, and that coat are sculpted and look pretty unique. 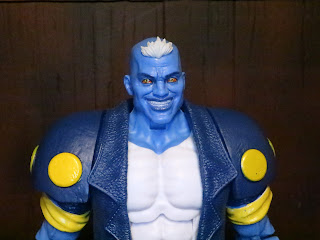 * The head sculpt really stands out. Maggott looks happy. Really happy. Like, just that happy, go-lucky smile of an easy going dude. Is that really the case? I don't know. That's what's going on here, though. That hair is pretty wild and seems like a relic of the late 1990s. Does Maggott get his hair done at the same place as Strong Guy? 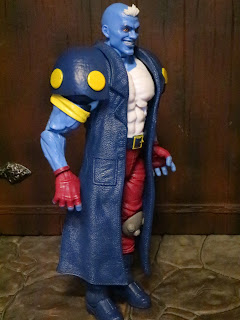 * Maggott's coat is a separate piece, but it's not really meant to be removable. The upper sleeves are sculpted onto his shoulders, so if you pop the coat off they're still there. The big shoulder pads are neat, though. They move a bit, allowing his shoulders to still have a pretty decent range of motion even with the coat on. The coat is textured to look like leather inside and out and there are sculpted buttons, slits, and pockets. 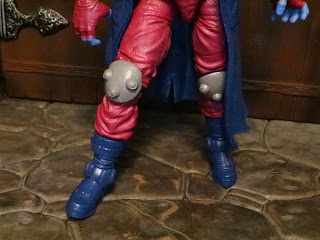 * I'm not sure if these kneepads and boots are new but they look cool and extreme and everything, like a 1990s character would look. 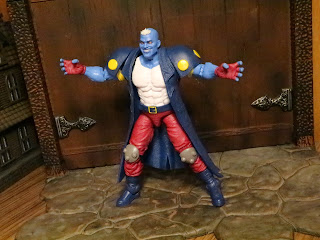 * Maggott is quite well articulated and everything feels really smooth and solid. He's really move quite nicely and the coat, while not pliable or anything, definitely doesn't inhibit things as much as you'd think. 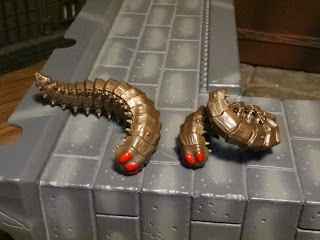 *Rather than a digestive system, Maggott has two semi-sentient mechanical slugs who come out of his body, eat and digest stuff, and then bring it back into his body to power him up. Their names are Eany and Meany and they both come with the figure. One is sculpted to kind of drape over Maggott's shoulder while the other can wrap around his forearm. They're nicely sculpted with lots of legs and sculpted segments on their bodies and three red, oval-shaped eyes on their heads. 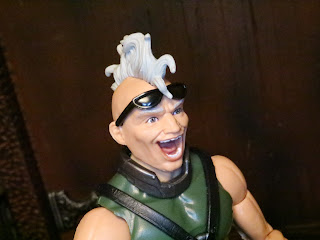 * Maggott comes with two parts for Bonebreaker, the first being Bonebreaker's head. This looks fantastic and even has removable sunglasses that can flip up. I could honestly see someone grabbing this head just to make another cool Dreadnok for G.I. Joe, so the inclusion of this piece is a big plus. 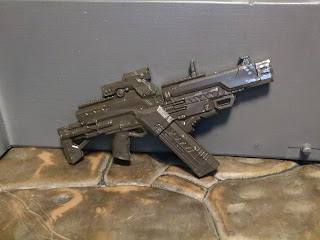 * Next up is a pretty sweet looking rifle. Maggott can't wield it (his hands are open) but it's a darn fine extra. Again, even if you're not building Bone Breaker, this is just a cool extra gun to have around. 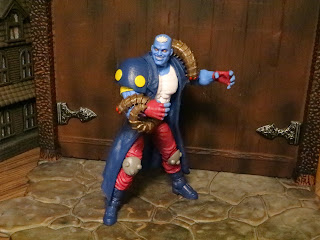 Man, I wasn't necessarily expecting a lot from Maggott and he wasn't a figure I was really looking forward to, but he's really, really good. Besides having some key parts for the very cool Bonebreaker BAF, he's just a fun toy. The slugs are weird and wild, Maggott himself has a lot of personality, and he has a unique look and color scheme. Maggott might have the most bizarre (and not in a good way) mutant power you've ever heard of, but he's a super fun toy and gets a Great and a 1/2 from me. If you know how those slugs enter and exit his body, let me know in the comments below. Actually, maybe not. I'm not sure I want to have my fears confirmed...


These are the first figures of Maggot, Eany, and Meany I've reviewed. For more Marvel Legends Series reviews check out the following: