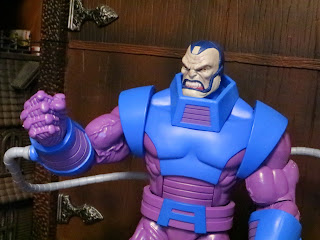 My introduction to Marvel was through Toy Biz's Marvel Super Heroes and X-Men action figure lines, so these Marvel Legends Retro Collection release always give me some warm and fuzzy nostalgia. I have a pretty decent Marvel Legends X-Men collection but I never had the Apocalypse Buid-a-Figure and, while I like the Age of Apocalypse version of Apocalypse I have, I really wanted this classic version of the First One. While Apocalypse is an ancient mutant, he was actually a fairly new character when he appeared in Toy Biz's original X-Men line (his first appearance was in X-Factor in the summer of 1986). I'm pretty sure I got the original Apocalypse figure at a KB Toys and I distinctly remember his "extending" action and his weird staff with a hidden jewel inside. This one mirrors the classic colors and packaging of that vintage toy but the accessories are different. He doesn't grow, either. Let's take a look at Apocalypse after the break... 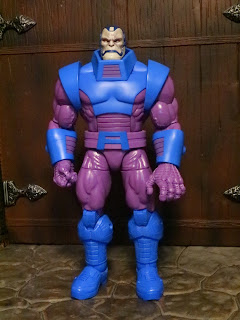 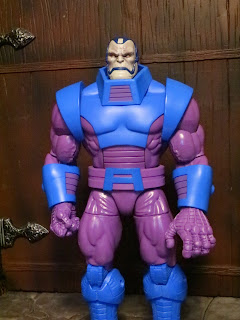 * This version of Apocalypse looks to be modeled after the character's appearance in the X-Men animated series. He's certainly recognizable as his early comic counterpart and as the vintage toy, but the purple bodysuit definitely reminds me more of his animated appearance. There's no cel-shaded paint details or anything, like on the boxed figures, which I'm glad for. I like my Marvel Legends figures to be able to fit in with everyone else in that bod, beautiful, and colorful style the line is know for. Apocalypse is quite muscular and his outfit has lots of parts that show off his augmented suit and body like the details on his boots and his funky neck guard. 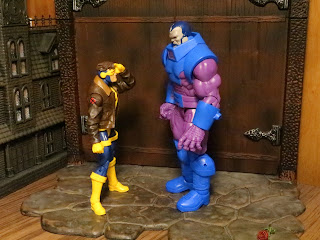 * Apocalypse is a big guy. Here he is next to Scott "Slim" Summers, whom he towers over. He's also quite wide. He's definitely a Build-a-Figure sized figure for sure. 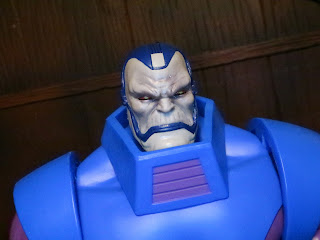 * Apocalypse has a fantastic headsculpt which makes him look really ominous and menacing. His gray skin looks ancient and the paint detail brings out his unhealthy complexion nicely. I'm also digging the blue lips. They're so weird looking but they come off as pretty intimidating on Apocalypse, particularly because he looks so sour. 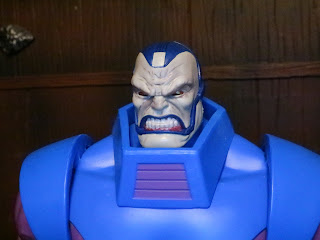 * Apocalypse's second portrait just makes him look straight up angry with squinted eye and bared teeth. Yikes! That's a guy you don't want to mess with. 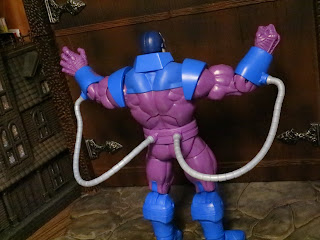 * Apocalypse has two plastic tubes that plug into the back of his belt and extend to his forearms. They're not complex or anything but they add to the look of his outfit, making him look more futuristic and robotic. 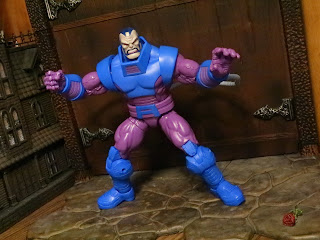 * Apocalypse's articulation is what you'd expect from a larger Legends figure based on base body that's now a few years old. Still sturdy and still good, solid articulation, though there aren't any balljointed mid-torso joints or anything like that which many newer figures are sporting. 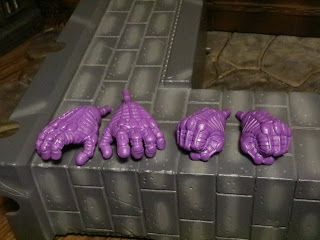 * Apocalypse comes with four extra hands, each looking like they're covered in some sort of armor. Or maybe just robotic. There are a pair of grasping hands for when he's making evil plans (or having them foiled!) and a pair of fists for some good old fashioned brawling. 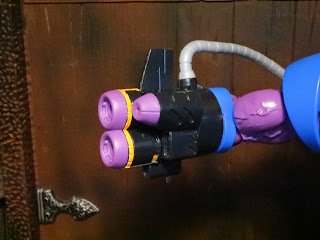 * Apocalypse also has a cannon arm that's right out of the animated series. It has four barrels, a fin-like protrusion, and a place for one of his cables to attach to when he's using it. You just pop off a spare hand and stick it in the socket. (Update: Thanks to a reader, I've learned the bracers come off, which I didn't realize. Pop that bracer off first and this thing fits like a glove! 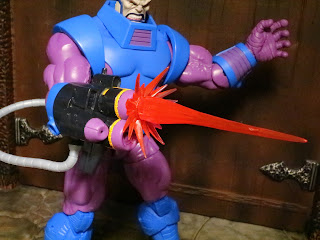 * All four of the barrels on Apocalypse's blaster can take an effects piece and there's a massive one included for one of the two larger barres. It's a fairly large red energy beam with a fare of energy at the base. 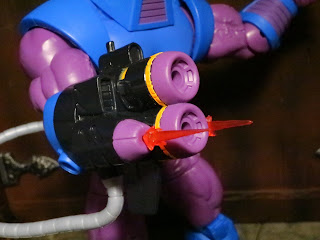 * There are also two smaller red laser blasts that can fit into the two smaller holes. If you put the larger beam in the top barrel you can fit all three energy effects at once. 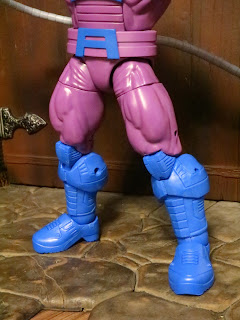 * I get that Apocalypse is supposed to have a simpler, cleaner style, but there surely could still be a bit of detail on his boots, right? Considering how large he is, they just look very plain with no highlights or painted detail. 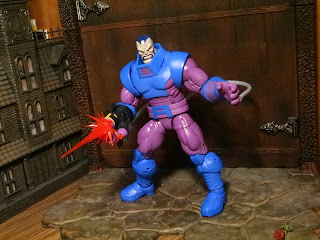 Apocalypse is definitely a key piece for an X-Men shelf and anyone who missed out on him previously will probably want him this time. He's a nice looking figure, though I do wish he has a bit more paint detail. I get that he's based on the cartoon, but when has Marvel Legends ever really been beholden to one specific source of inspiration other than for film based characters? Since they're using the Toy Biz packaging, his weird staff with a hidden gem would have been cool for an extra. At $40 bucks I would have loved a few extra accessories, even a repack of some of the spare arms released for the BAF Apocalypse. He's a Great figure.

This is the first figure of Apocalypse I've reviewed. For more Marvel Legends Retro Collection reviews check out the following: