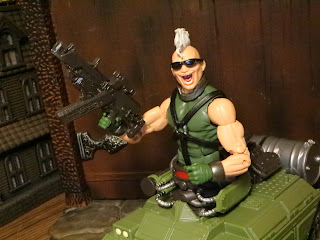 I was really into Toy Biz's Marvel figures as a kid, particularly the X-Men and X-Force lines. Throughout the 1990s Toy Biz cranked out characters from almost every corner of the Marvel Universe, paving the way for the eventual rise of Marvel Legends, but the X-Men universe definitely was the area of heaviest focus. Toy Biz often has some unusual character selection, so sometimes major characters were never made while characters who had incredibly brief appearances made their way into the line. Bonebreaker was a character I didn't know from much as a kid other than his appearance in the 1992 arcade game, but I thought he was the best. I mean...he's a tank guy. What's not to like about that? Bonebreaker has been one of my most wanted Marvel Legends figures and I was disappointed that he finally made his appearance in a series of figures that I wasn't overly interested in. When I first stumbled upon the complete set of six figures at the store, I couldn't bring myself to drop $150 plus on so many figures I wasn't interested in just to build him. Fortunately with some luck and patience, I ended up snagging Bonebreaker and four of the figures from the series for under $60 bucks. Not bad! I've been eagerly looking forward to reviewing Bonebreaker, so let's take a look at him after the break... 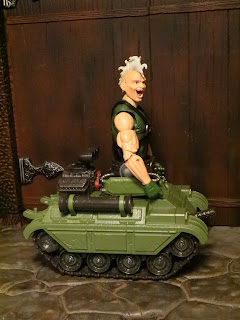 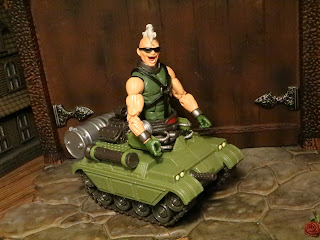 * The first positive thing I have to say about Bonebreaker is that he's a tank. I mean, literally; his body is grafted onto a tank. The Reavers are all pretty wild cyborgs but Bonebreaker just takes the cake. Having the lower half of his body be an armed tank is just too darn cool and Hasbro has captured his wild attitude and fierce appearance perfectly here. 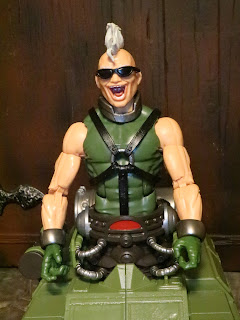 * Bonebreaker is fairly normal looking from the waist up; he's a thin, muscly little guy in a green shirt with torn off sleeves and a black harness, presumably worn for helping him stay upright on his tank. Maybe it's for fashion, though. Maybe he just wants to sport something that says: "Daddy likes leather." The harness is a separate piece, though it isn't removable without disassembling the figure. Bonebreaker is also sporting some metal bracelets over his wrists and a metal neck collar. Is it for support or fashion? We just may never know. 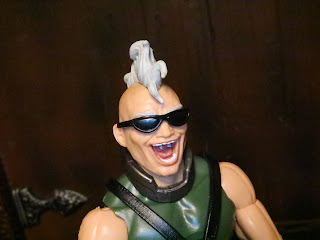 * The headsculpt is awesome. Bonebreaker just looks like a nasty, fun-loving guy. These guys hung out in Australia for quite some time, so is Bonebreaker Australian? I love the gleefully wicked laugh on his face, his cool sunglasses, and that mohawk. That is some wild stuff. 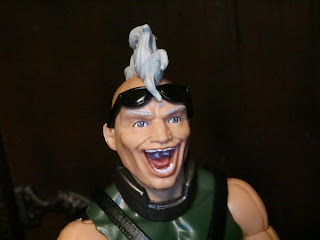 * The glasses can flip up to reveal Bonebreaker's eyes, too. if you're not planning on picking up the rest of the Reavers, I bet this guy would love to hangout with your Dreadnoks. Eespecially since Zarana is out now. Rowr! 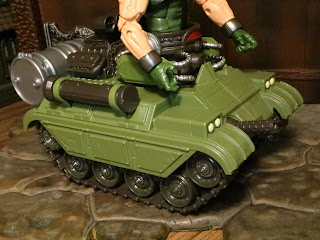 * The side of Bonebreaker's tank body looks suitable armored and has some rather nicely detailed wheels and treads. The wheels don't actually move but the treads are strips of rubber attached over the wheels. It actually looks pretty nice. 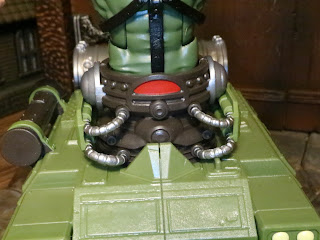 * This gadget comprised of cables and gadgets and such looks like what really connects the human half of Bonebreaker to the tank. 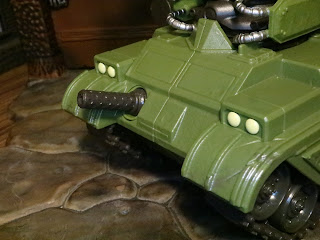 * This machine gun in the front is really cool. Not only is this a handy weapon but it's on a balljoint so you can aim it around. 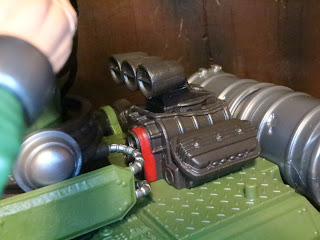 * The engine is a really cool piece, too. This has some excellent sculpting to show off the machinery and a couple paint applications to help some parts stand out. I really thought it looked incorrect but this is how Hasbro shows is as being assembled: With the air intake pipes facing forward. 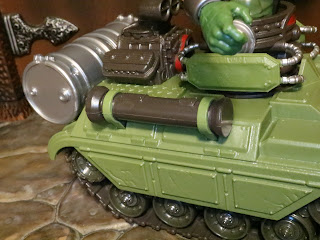 * On the right side of the tank it looks like there is a missile launcher attached via some straps. It's not a removable piece, so I wonder if this is supposed to be a piece of artillery Bonebreaker stores here or if it's a actually a mounted weapon attached to his cybernetic tank body. * The fuel cans plug onto the racks on the back. They're simple, hollow fuel drums but they're cool and removable. Use them like accessories, have Bonebreaker take them off and chuck them like explosives, or just leave them be! Lots of options. 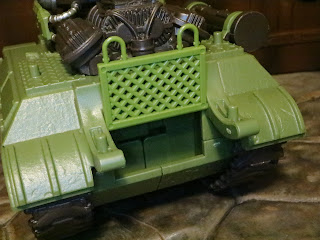 * On the back of the tank, underneath the fuel tank racks, is a little storage area. The hinged grate lifts up, allowing you to store something there. Maybe a place to keep Bonebreaker's extra set of hands? 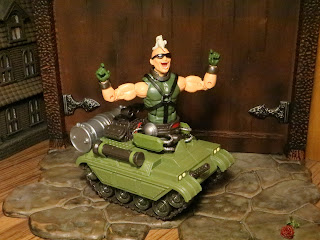 * From the waist up Bonebreaker is built like your average Marvel Legends figure, meaning he's nicely articulated with a great range of motion, particularly in his arms and his head. Being that he's so expressive and crazy, he's really a lot of fun to pose and play with. 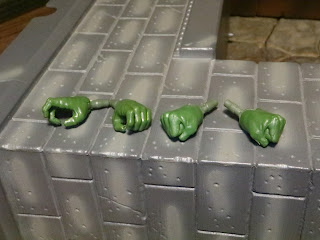 * Two pair of hands are included: A standard pistol grip set for using his rifle and a set of fists. They swap easily, so no worries about breakage. Just make sure you don't lose the silver wrist cuffs when you swap out the hands. 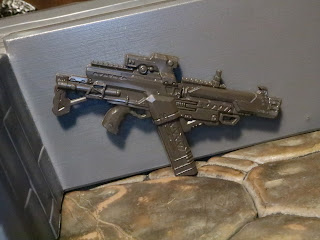 * Bonebreaker's primary weapon is a very fun, slightly futuristic assault rifle of sorts. There's a lot of detail and, as far as I'm aware, this is a new piece unique to him. It has an excellent comic book aesthetic and looks like something the character uses in the books. 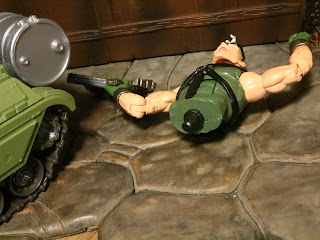 * I only have one issue with Bonebreaker and that's with his waist connector. When I turn him left or right, he tends to come loose. I can pop him back in just fine, but when you go for that waist swivel he comes loose. 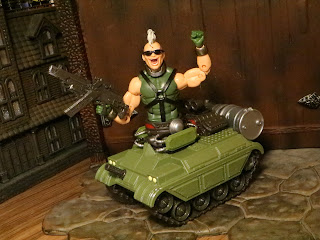 Is Bonebreaker my favorite Marvel Legends figure of 2022? Maybe. Probably, really. Besides being part of a cool group of X-Men villains, Bonebreaker is just a really fun action figure. He's well designed, fun to mess around with, and has a fantastic expression. There are so many neat little extras like his movable sunglasses, the storage hatch, the removable fuel tanks, and the balljointed front gun that make him feel fresh and creative, something that can't always be said of Marvel Legends figures. This guy is downright Epic.


This is the first figure of Bonebreaker I've reviewed on the site. For more Marvel Legends Series reviews check out the following: