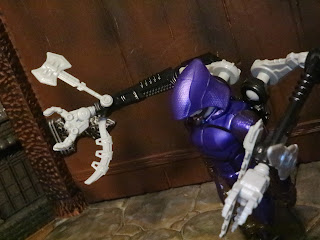 When I started reviewing this series of Final Faction accessory packs a few weeks ago they were the newest releases out there. There's a new set of six packs, however, which give more gear and weapons to Alpha Team 1, particularly the first series figures. Today, though, I'm reviewing the last of the six accessory packs from this series by checking out the Torn Cyber Arms set. Torn is a very cool figure who seems to be a Kharn of some sort but who assists Alpha Team 1 disguised as a human. The comic book for this series is really quite neat and issue #1 shows Torn sneaking his file into the roster of human warriors considered for the Alpha Team 1, so his motivations are still quite mysterious. This accessory set features some cybernetic arms which attach to the back of the figure, offering him more gear and weapons for battling the Kharn (if that is, indeed, his ultimate goal). Let's take a look at the Torn Cyber Arms after the break... 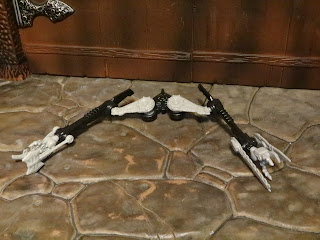 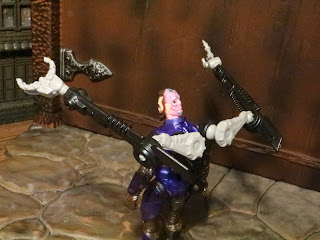 * Torn's Cyber Arms attach on to the his back like a simple backpack. It's called a Psyber, a cybernetic harness that connects to Torn via a neural network. The two arms extend out and do have some articulation at the attachment points. The grey upper part of the arms are balljointed while the black arms have swivel joints. The claws and attachments all can swivel as well. 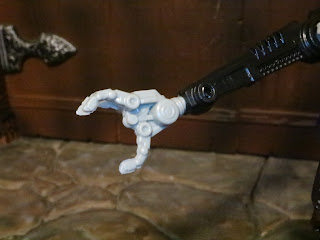 * On the end of each arm is a large claw called a Grappler. They have a neat design and look like those toy robotic arms you can buy from gift shops and dollar stores. 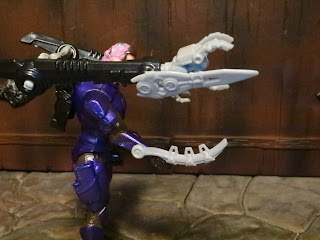 * There are four attachments included with the set and they can either attach to the sides of the cyber arms or onto the ports on Torn's forearms. That makes this a very versatile set with lots of ways to display Torn and his new toys. 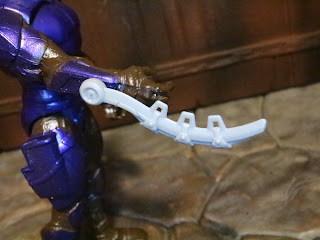 * The first of the four smaller attachments is called Death's Kiss. It's apparently a "psionic" scimitar. I like the curved blade of this short sword and it definitely fits Torn's aesthetic. He looks pretty slick wielding this short blade. 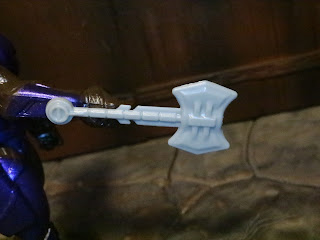 * Next up is the Cleaver, a double bladed axe. This is another pretty nifty weapon useful for hacking up the Kharn. 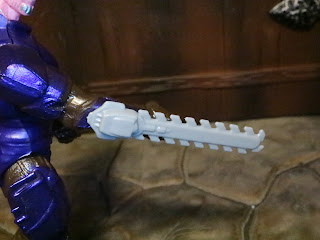 * My favorite tool might be the Emancipator, a short chainsaw with diamond edged teeth. The package descriptions for the weapons are really cool and definitely get your attention. Handheld chainsaws like this are just too darn cool, y'know? 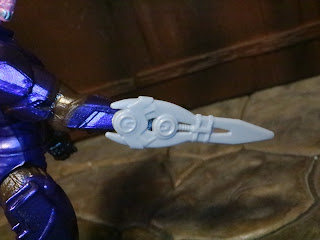 * Last, but not least, is the Talon. This reminds me of the hidden blades used in the Assassin's Creed games. It's a cool design and looks like it'd be a wicked stealth weapon. Plus, Torn is sporting a hood, so he already kind of looks like an assassin from those games, too. 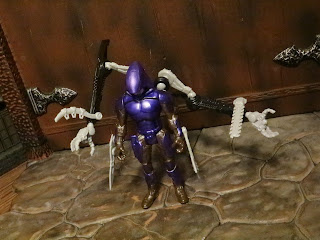 I really like Torn's Cyber Arms accessory pack. Besides the backpack being kind of fun (and feeling like something from a 1990s Kenner toyline) the additional weapons that can be used on the Cyber Arms pack of on Torn's forearm attachment points are just darn cool. The designs are great and the ability to really equip your figure however you want is a nice touch. This is a Great and a 1/2 set that's definitely worth scooping up if you own Torn. It really makes an excellent figure even better.
If you're a fan of Torn I've also reviewed the standard Torn figure.
For more Final Faction reviews check out the following:
A.C.R.M.
Amari
Arrow ATV
Arrow ATV Weapons & Armor
Brute
Brute Striker
Churro & FD-0
Crawler
Decimator
Diabol
Drone
Drone Scourge
Heavy Arms
Huntra
Krepitus
P-131
P-131 Thunderbolt
Riptide
Ruck
The Rumbler
The Rumbler Weapons & Armor
Scope Long Range
Shift
Shock Arms
Spc. Scope
Steadfast
Synthoid
Synthoid Evolution
Torn
X4 Turret
Posted by Barbecue17 at 5/22/2022