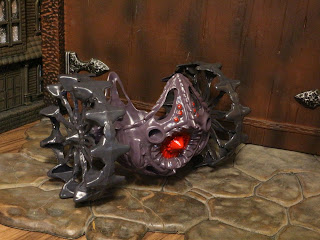 Remember how the good guys of Final Faction got a vehicle last year? Now it's time for the bad guys to get a ride! Today I'm checking out the Rumbler, a new vehicle for the Kharn in the Dollar Tree exclusive Final Faction toyline. I'm still just amazed by how crazy the Final Faction concept is: A unique, well thought out and creatively designed toyline exclusive to a dollar store which includes vehicles and accessory packs? Yes, now the toys are $1.25 (though you can still find the first series figures for $1 at Family Dollar stores) but, still, that's crazy. With the prices of action figures, especially those targeted towards collectors, continuing to increase it would be amazing to see a renaissance of fun and budget friendly toylines. These aren't Mezco One:12 Collective items, folks, but they're pretty darn cool. Today I humbly submit for your approval the Rumbler, an alien vehicle sold in a box for $1.25. Let's check it out after the break... 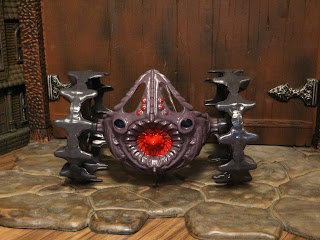 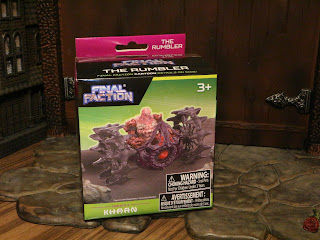 The Packaging:
* Like the Arrow ATV, the Rumbler comes packaged in a box. While the standard figures and accessory packs come packed on simple blister cards the vehicles and their accompanying weapons and armor kits come in small boxes. They're not sealed or anything so you can check to make sure you're getting what you're buying at the store quite easily. 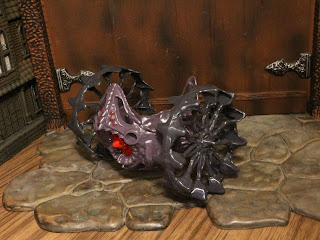 The Positives:
* The Rumbler is a three wheeled vehicle with two massive wheels (made of vertebrae) and one smaller wheel in the rear and a chariot like cockpit. Most pieces are simply molded in colored plastic though their are a few paint applications on the front of the vehicle. the Rumbler looks like the body is made from some sort of alien shell or exo-skeleton, so it fits in with the Kharn aesthetic. 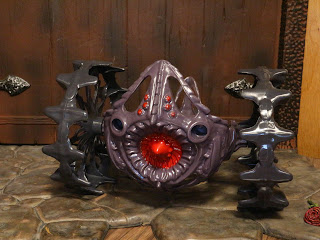 * The front of the vehicle is pretty well armed (though there are two ports for the weapons from the accessory pack for the Rumbler). The little red orbs on the front are "anti-infantry lasers" while the giant turbine looking thing is an "Earth core melter." It kind of looks like the front of the Decimator, doesn't it? 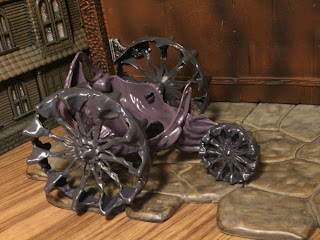 * Here's a shot of both a large wheel and the smaller wheel. The "vertebrae" effect is pretty cool even though there are no paint applications here. It's pretty wicked to think about the Kharn using the bones of some giant creatures to craft their vehicles. 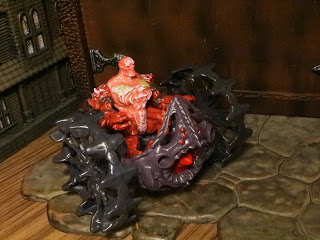 * The cockpit easily holds the figures, particularly a larger figure like General Diabol. 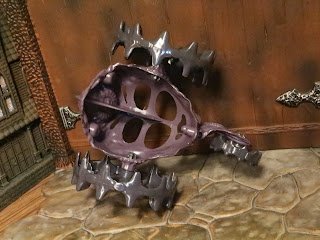 The Negatives:
* The cockpit is really bare. Like, there's really nothing here. I definitely get that this is a budget line but anything would have been cooler than nothing. 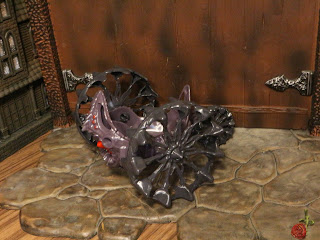 I'm not loving the Rumbler as much as I liked the Arrow but it's still a decent, sturdy little vehicle for tis line that fits in aesthetically with the other toys. The feel reminds me of the plastic toys that drug stores and such used to sell in the 1980s though there is some unique sculpting here and cool stuff like the earth core melter and the vertebrae wheels. In a few days I'll be checking out the accessory pack to gear the Rumbler up but, by itself, it's still worth a Good and a 1/2 rating. I bet a paintbrush and a little kit-bashing would make this into something pretty special, though.
This is the first toy of the Rumbler I've reviewed. For more Final Faction reviews check out the following:
A.C.R.M.
Amari
Arrow ATV
Arrow ATV Weapons & Armor
Brute
Brute Striker
Churro & FD-0
Crawler
Decimator
Diabol
Drone
Drone Scourge
Huntra
Krepitus
P-131
P-131 Thunderbolt
Riptide
Ruck
Shift
Spc. Scope
Steadfast
Torn
X4 Turret
Posted by Barbecue17 at 5/10/2022