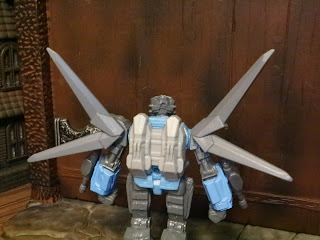 May has definitely been the month for me to go back and complete reviews of the first series Final Faction releases from 2020 and I'm continuing with another one of the first series accessory packs: The Air Assault pack. While the name doesn't specifically label this as being for the A.C.R.M., it's clearly designed for the mech as the pieces snap onto the figure perfectly. This set definitely improves the A.C.R.M. but can also be pretty fun when used with Churro's FD-0 mech. Let's take to the skies and check out the Air Assault kit after the break... 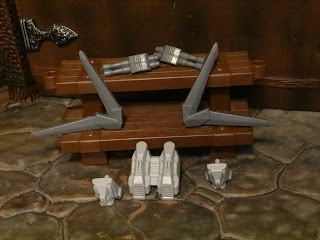 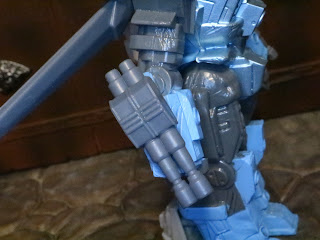 The Positives:
* First up are the arm cannons, two double barreled weapons that give the A.C.R.M. or FD-0 some firepower. They simply plug in any of the open ports on the figure. They look pretty fitting with the style of the toys and definitely are useful for arming these guys to take on the Kharn. I like the simple, basic design of these cannons. 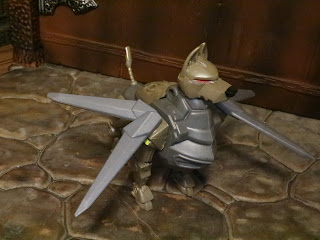 * Here's FD-0 showing off the wings. They fit on both on the A.C.R.M. but they also look cool when Churro has the need for speed. There are two different molds (a left wing and a right wing) and they have a cool, angular design to them. 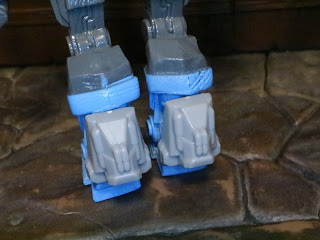 * The leg boosters fit on the back of the A.C.R.M. and are intended to aid in flight and give the mech an edge in ground combat. They're kind of plain but, still, not bad for something to augment a $1 something toy. 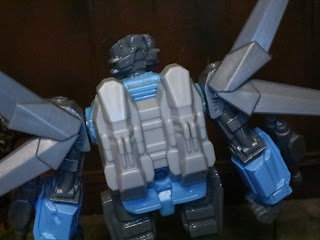 * To really give the A.C.R.M. some flight capability is the back booster jetpack. Without the wings, it allows the A.C.R.M. to make some massive jumps. With the wings the mech can soar into the wild blue yonder and bring the pain to the Kharn. 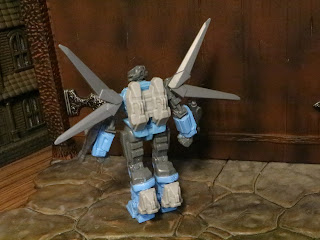 This set isn't terribly exciting on its own but, when you have a mech or two in need of some equipment, it really turns out to be a worthwhile purchase. I've actually picked up two, one for A.C.R.M. and one for FD-0, as the guns and wings are just really hands for both of those figures and the boosters are a necessity for the A.C.R.M. I'm sure customizers and such can find all sorts of uses for these but for me, they simply make two very solid figures that much better.
I've reviewed plenty of other Final Faction accessory packs and figures,including:
A.C.R.M.
Amari
Arrow ATV
Arrow ATV Weapons & Armor
Brute
Brute Striker
Churro & FD-0
Crawler
Decimator
Diabol
Drone
Drone Scourge
Heavy Arms
Huntra
Krepitus
P-131
P-131 Thunderbolt
Riptide
Ruck
The Rumbler
The Rumbler Weapons & Armor
Scope Long Range
Shift
Shock Arms
Spc. Scope
Steadfast
Synthoid
Synthoid Evolution
Torn
Torn Cyber Arms
X4 Turret
Posted by Barbecue17 at 5/25/2022