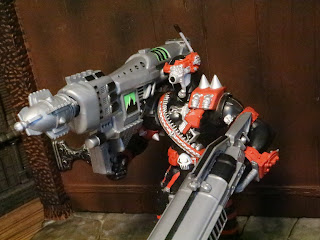 You now what? Other than Masters of the Universe stuff (which is the bulk of my collecting), I really haven't reviewed any older figures recently. I used to review old stuff all the time but at some point I really just started focusing on new stuff and ignored older stuff except for MOTU and horror reviews during 31 Days of Toy Terror. Since I've been getting back into Spawn I figured it was time to go back and check out some classic Spawn toys. Today I'm checking out Commando Spawn from 1995. Part of the second series of Spawn toys from McFarlane (then Todd Toys), Commando Spawn was still an early release in a toyline that still kind of continues today. The early McFarlane stuff is interesting as while the sculpts and paintwork were impressive for the time, they clearly were also designed with play features and action features in mind. It'd still be a few years before McFarlane fully moved into creating articulated ministatues/ stactions. Of course, now the Spawn figures are incredibly articulated and built to be sturdy, a fine blend of form and function. Today, though, let's take a look at a super cool Spawn that I never had as a kid. I found him a week or so ago at Gamers Alley, a pretty cool shop in Gastonia, NC. Let's lock, load, and take a look at Commando Spawn after the break... 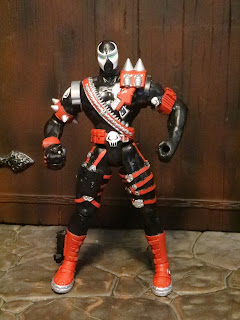 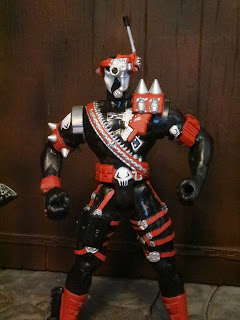 The Positives:
* Commando Spawn has the basic colors you'd expect from Spawn (black and red with a little white) but he's definitely more militaristic and less goth-superhero here. Al Simmons was a military man so early on in the comics when he needs to solve problems, he tends to grab the biggest guns he can find and load up on ammo, grenades, and tactical gear. There's some excellent detail here with paint applications that are rather neat and clean. He's got lots of straps, spikes, and skulls, and a bandolier of ammunition across his chest. He's also sporting a non-removable pistol in a shoulder holster and two grenades. 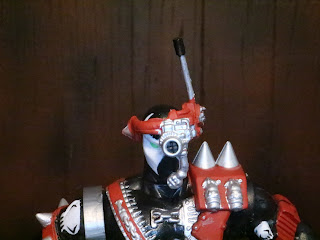 * Commando Spawn augments his powers with a headset featuring a microphone (presumably for communicating with Terry Fitzgerald), an optical modifier of sorts, and a giant antennae. The headgear is removable and can also pivot up and down. The head underneath is pretty basic but he does have those nifty green eye. 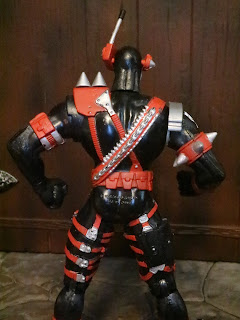 * Here's a shot of Commando Spawn from the back. Again, it's pretty crazy to see the amount of details on this guy. Lots of painted buckles and pouches and such. 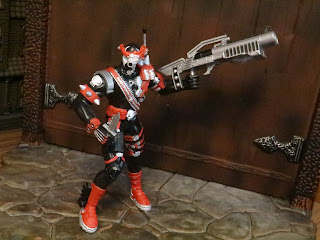 * In 1995, articulation was a little bit sporadic and most toylines simply features cut/ swivel joints. There were more articulated figures at the time (Ronin Warriors, some Power Rangers) but overall this version of Spawn is very representative of figures of the era. He has the standard five joints but also things like hinged knees and a swivel bicep. These were clearly built to look good on display or for kids just playing with them in a more traditional way rather than posing them in all sorts of crazy ways. Commando Spawn does feel pretty sturdy and is fun to mess around with.

* Commando comes with some ridiculously oversized weapons that have that boxy, overdesigned style of the 1990s. First up is his shotgun, a very mean looking double barreled shotgun. I like the design and the paint applications. Because of the spiked details on the stock it really can only fit in his left hand, but it fits nicely there and looks like it's powerful enough to deal some damage to the big dudes Spawn usually goes up against. 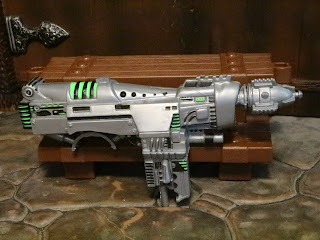 * When that massive shotgun just isn't enough firepower Spawn also has a massive missile launcher. This thin is pretty cool. Large, missile firing weapons were definitely a thing in the 90s and usually they were pretty boring. This one, however, looks like a real piece of technology with a more "realistic" design, a logical way to carry and fire the weapon, and a cool silver, black, and neon green color scheme. 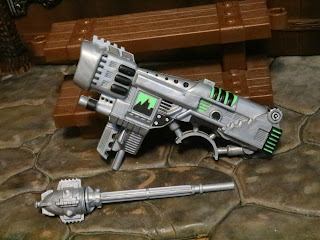 * The rocket launcher looks like it has some sort of screen on the side, perhaps a targeting system or something. It also works, and fires a pretty cool missile a decent distance. 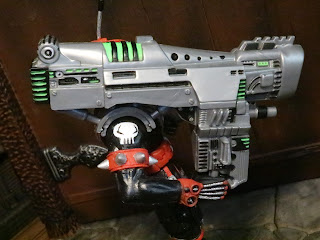 * How does Spawn tote a missile launcher this large? Quite easily, actually. The launcher is designed to fit over his right shoulder where it actually snaps on to an articulated mount. It locks on nicely and makes the weapon seem like it would be actually usable by the figure. Clever design. 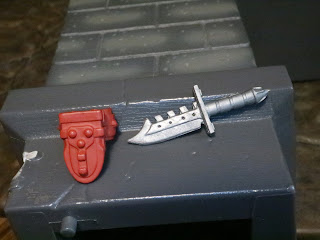 * When he needs to get up close Spawn comes with a cool combat knife. Spiked hilt, serrated edge; this thing would make Rambo jealous. There's also a sheath which the blade can fit in. 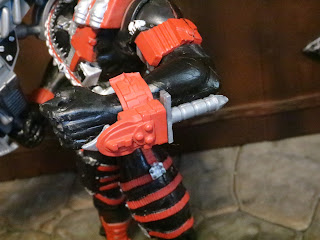 * The sheath easily attached to Spawn's left forearm, keeping the knife close by for him.

* Spawn comes with a second small, pointy dagger. He can hold it in his hand or store it in a sheath attached to his right boot. 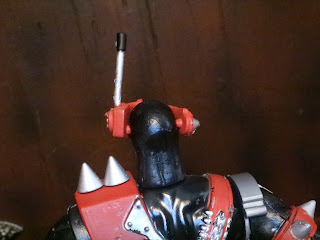 The Negatives:
* The goggles/headset that Commando Spawn wears is pretty nifty but it doesn't stay on as well as it should, particularly if you're rotating it up and down. the pegs seem a bit too large for the head to fully go in and so the sides of the headset stick out a bit. 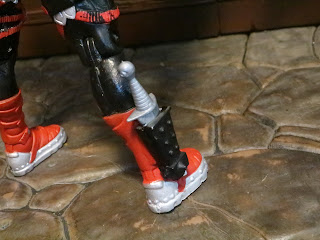 * The smaller dagger is supposed to fit in Spawn's boot but it just isn't happening here. Well, it fits in but it's really loose. I think the two halves of the sheath just aren't aligned properly. 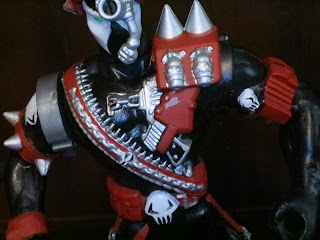 * If you're a regular reader of this site you know that one of my major pet peeves are pistols and knives sculpted onto the figure rather than being an actual removable accessory. Now, granted, this is a nearly 30 year old figure, so I'm not going to be as harsh on Spawn as I would on something modern, but could this have been a separate, removable pistol? I think so. 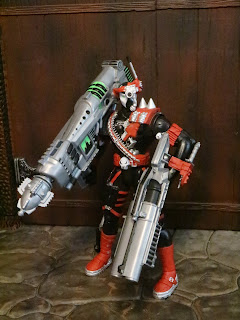 Man, this is a pretty rocking Spawn figure. Considering he was released in the second series back in 1995, Commando Spawn is loaded with excellent detail and some truly cool weapons. McFarlane Toys definitely shot for the stars here and anything that's wrong with this figure is really a result of cool things they tried just not coming out as intended. Commando Spawn earns a Great and a 1/2 from me and is definitely a pretty impressive toy. I know there's a Commando Spawn coming out in the Mortal Kombat series (with no guns, though) so I'm still anxiously awaiting McFarlane Toys to announce a regular Commando Spawn figure in the modern line. Imagine how cool that will be? I wish I'd owned this guy as a kid but in 1995 I was definitely spending all of my attention and money on Micro Machines, Kenner Batman toys, Congo toys (yes, really), and Star Wars: POTF2. Interested in more vintage Spawn reviews? Let me know and I'll see what else I can dig up...
Looking for more of Spawn/ Al Simmons? I've also reviewed the movie based Al Simmons, Burnt Spawn, and standard Spawn, the Mortal Kombat 11 Malefik Spawn (Bloody Disciple) and Spawn (Bloody), the modern Spawn with throne, and the 2022 Mandarin Spawn Deluxe who isn't Al Simmons, but he's still Spawn.
For more Spawn figures from the vintage line check out the following:
Clown
Overtkill
Tremor
Posted by Barbecue17 at 5/21/2022