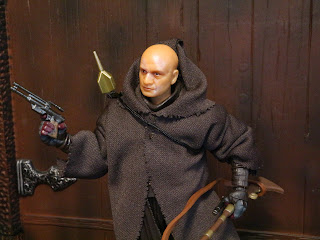 May the Fourth Be With you! For today I've got a special review lined up: Boba Fett (Tython) from Star Wars: The Black Series by Hasbro. To be perfectly honest, Hasbro's Star Wars: The Black Series line hasn't been thrilling me for the past six months or so. With too many exclusives and repaints in the line, figures from current media not expected to drop for well over a year, and ever increasing prices, it's really taken something pretty special to catch my attention. Boba Fett, however, always catches my attention. I've really enjoyed Temuera Morrison's portrayal of the character in both The Mandalorian and The Book of Boba Fett so it's quite cool to finally have a figure based on his rendition of the character. While this figure is designated as Boba Fett (Tython) and is based on his journey to that planet in The Mandalorian, this is actually an outfit he wears far more on Tatooine in The Book of Boba Fett. It's a unique look that shows off a significant period of development for the character, so let's take a look at it after the break... 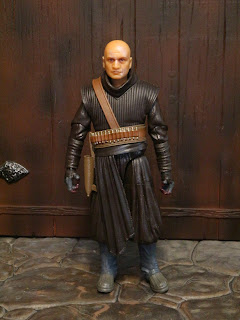 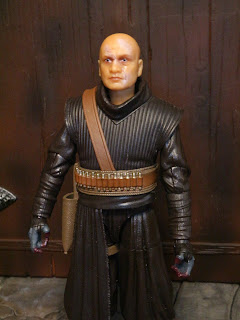 The Positives:
* Boba Fett does come with a soft goods robe that covers him completely but before I get into that, let's take a look at the base figure. Having been accepted into a tribe of Tusken Raiders, Boba Fett begins to adopt their garb in order to survive the harsh weather of Tatooine. He's wearing a multi-layered outfit of dark, woven fabrics with different textures. It looks fantastic and captures Boba Fett's physique well. The tunic hangs down over his legs which are fully sculpted but give off the illusion that they're covered by flowing robes and billowy pants. His bandolier and belt is a separate, non-removable piece which is filled with cartridges, presumably for the cycler rifle he carries. 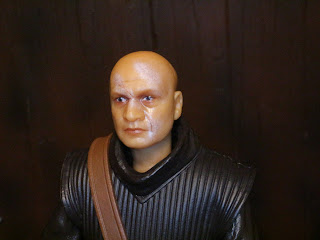 * The portrait captures Temuera Morrison's likeness quite nicely, particularly his facial features. Boba Fett is definitely still recovering from the injuries sustained during his time in the Sarlacc Pit and his time in the Tatooine desert and those wounds and scars, in various states of healing, are visible on his head. Parts of his head are paler, showing off the healing flesh. 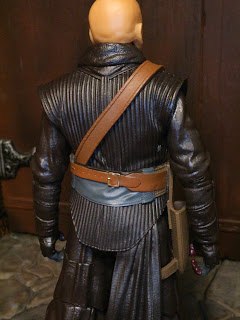 * Here's a look at the back of the figure to show off more of the cool details on Boba's robes and wraps. There's some nice texturing all around on this guy. 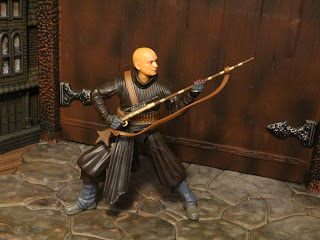 * While he's clad in layers of garments, Boba Fett's articulation is quite nice. He does have all of the joints you'd expect on a modern Black Series though some of them are quite well hidden. His knees look like they're covered in a billowy material but there are functional swivel/ hinge knees underneath as well as boot swivels. He also has the pectoral hinges hidden underneath his tunic. 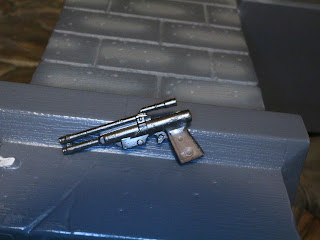 * I'm not sure of the exact make and model of this blaster pistol but it's definitely a pretty sweet looking piece. Good sculpt, convincing paintwork, and it fits in the Fett man's hands quite well. 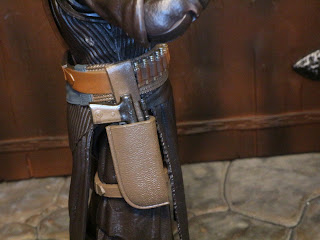 * When not in use the blaster pistol fits in this excellent holster on Boba Fett's right hip. When he's wearing his cloak the pistol and holster are hidden, too, keeping it concealed from nosey onlookers. 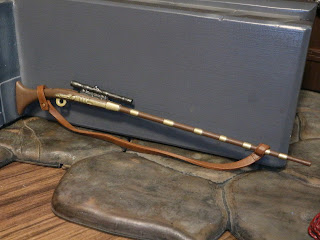 * Boba Fett has adopted the weapons of the Sand People and thus is toting around a cycler rifle which can fire projectiles, like a slugthrower. It's a very elegant piece with a beautiful sculpt, lots of detail, and quite a few paint applications. 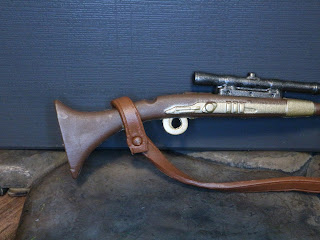 * The cycler rifle even has a removable sling which works really well. A simple peg keeps it on at the butt while a loop slides over the barrel. 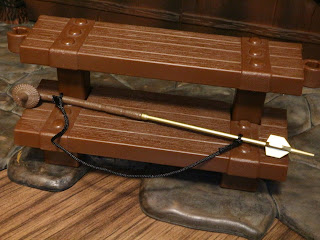 * Boba Fett also comes with a Gaderffii stick. It's quite nice looking with a paint application for the bladed end and some nice detail on the blunt rear of the weapon. It also has a simple string around it to serve as a sling for carrying it around. Boba Fett can actually carry all of his weapons and still have his hands free. Nice! 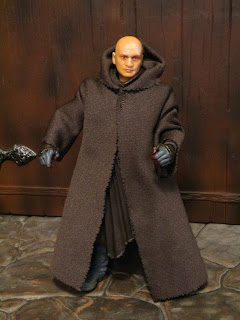 * Boba Fett comes with a really nice soft goods cloak. It seems well made with a functional hood and it looks well fitted on the figure. It's a good piece. But...
The Negatives:
* It doesn't look right to me. Boba Fett's robe in The Mandalorian seems to be darker, more charcoal and less brown, and it's very textured with a woven look to it. This looks more like a Jedi robe. I know we're not going to get a Hot Toys like replica here but this still seems off, especially considering we've seen other materials in the Black Series that look more accurate to Boba Fett's robe. 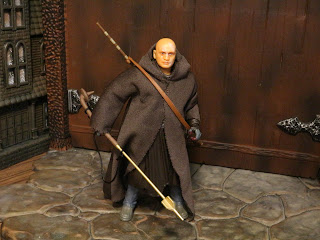 Boba Fett is a rather nice figure with an excellent likeness and some very cool accessories. I really like the figure and he's an important enough character in the Star Wars saga to make it onto my shelf. Considering that the Black Series has really weakened as a toyline in the past half year, that's definitely a complement to the figure. He comes with a really nice complement of gear to make him feel worth the higher asking price. I do wish he had a better cloak, though. As it is, I might end up displaying him sans robe and give his robe to a Jedi on my shelf who's missing one. Boba Fett (Tython) gets a Great and a 1/2 rating and was one of my most anticipated figures from the Black Series, so it's nice to finally have him.
If you're a fan of Boba Fett then check out my other Boba Fett reviews on the site, including the Black Series Phase I Boba Fett, the Walgreen's exclusive Boba Fett (Prototype Armor), Boba Fett (Carbonized), and the deluxe ROTJ Boba Fett, both the standard Hero Mashers Boba Fett and the Han Solo Vs. Boba Fett two-pack version, the Funko POP! #102 Boba Fett, and Boba Fett as a background character in the Bossk Micro Machines Mini Head and in the 4-LOM Micro Machines Mini Head.
For more reviews from Star Wars: The Black Series Phase IV check out the following:
332nd Ahsoka's Clone Trooper
Admiral Ackbar
Ahsoka Tano (The Clone Wars)
The Armorer
Asajj Ventress
Aurra Sing
Bib Fortuna
Boba Fett
Bo-Katan Kryze
Cad Bane
Clone Trooper (Holiday Edition)
Crosshair
Darth Vader
Din Djarin (The Mandalorian) & The Child
Dr. Evazan
Garazeb "Zeb" Orrelios
General Lando Calrissian
Greef Karga
Han Solo (Endor)
Hunter
Imperial Stormtrooper
Incinerator Trooper
Jar Jar Binks
Jaxxon
Kuiil
Luke Skywalker (Endor)
The Mandalorian
Mandalorian Loyalist
Mandalorian Super Commando
Moff Gideon
Phase I Clone Trooper
Phase I Clone Trooper Lieutenant
Ponda Baba
Princess Leia Organa (Endor)
Princess Leia Organa (Yavin 4)
Q9-0 (Zero)
Range Trooper (Holiday Edition)
Remnant Stormtrooper
Rey (Dark Side Vision)
Sith Trooper (Holiday Edition)
Speeder Bike, Scout Trooper, & The Child
Tech
Teebo (Ewok)
Wrecker