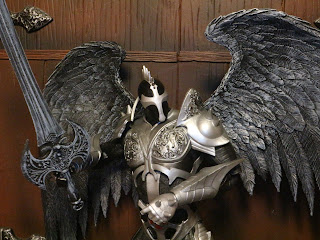 Ready for some more Spawn reviews? A couple of weeks ago I was out at GameStop and stumbled upon the Dark Redeemer, a newer release from the current Spawn line from McFarlane Toys. I'm currently reading through the Spawn compendiums and I'm only at about issue 80 and haven't started the new Spawn Universe stuff yet so I'm not familiar with this character. I know who the Redeemer is. Like Hellspawn, Redeemer is a title for one of Heaven's antispawn warriors and a few different people have taken up the title. Jason Wynn was the first Redeemer to appear in the comics and was later followed by Phil Temper. The third Redeemer is Eddie Frank who I believe is currently active in the Spawn Universe series. Eddie Frank appeared as a young boy early in the series who tried to protect his younger brother from their violent and abusive father. While Spawn tried to intervene to stop the abuse, Eddie ended up killing his father to defend his brother. Eddie's story continues tragically until he is selected to serve as the Redeemer with a grudge against Spawn.
So... who is this guy? The official McFarlane Toys writeup refers to him as Eddie Frank but from what I've heard he's actually a new character called the Forsaken who just debuted a few months back in issue #325 and appeared in issue #328 along with the Redeemer. Can anyone shed any more light on this guy for me? He's a straight up repaint of last year's Redeemer figure who I own but never got around to reviewing. His coolness factor just appealed to me even though I had some problems with the original Redeemer figure and his ability to stand with those massive wings. Let's take a look at the Dark Redeemer/ the Forsaken after the break and see if this guy's worth picking up... 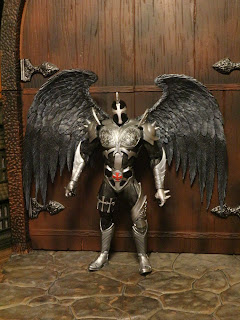 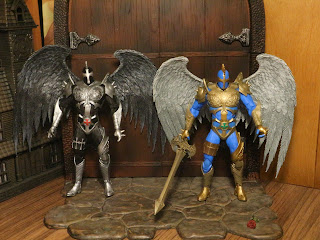 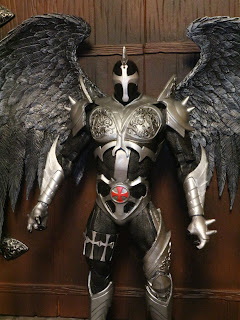 The Positives:
* There's nothing at all wrong with the sculpt of this figure. The Redeemer looks amazing in both his blue and gold outfit or in this black and silver getup. It's very, very cool looking with a design that's a mixture of goth, fantasy, and metal style. The armor mixes fine, ornate detailing on the chest plate and pauldrons with sharp, angular elements for a fearsome and jagged edge. The silver colors used here look incredible and the red cross on his belt really stands out. 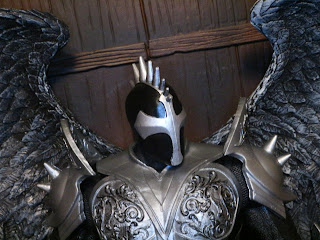 * The Redeemer's helmet is kind of unsettling here. While the standard version feels more like a blend between a superhero and a holy warrior like a Paladin, this one comes off as more bondage inspired. I don't know, maybe it's the black hood-like helmet with no visible features (just a cross) and the metal spikes across the top. It's amazing what a color change can do for how you perceive a figure. 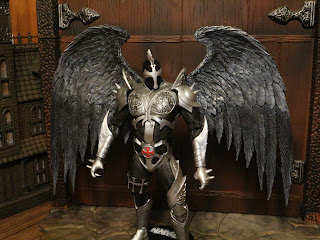 * The most impressive element of this figure is his massive wingspan. These wings really stand out and they're huge! They come separate in the package but once you put them on the feel like they're on pretty permanently, unless you use a lot of force or heat or something. They do make for an impressive and striking figure. 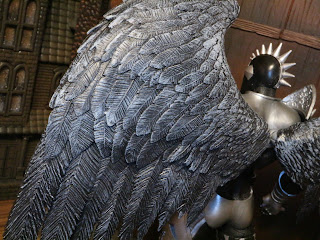 * The details on the feathers are incredible. Both the front and the back are covered with intricate little feather sculpts and a great textured paint effect. They really do look like they'd be feathery if you reached out and touched them. 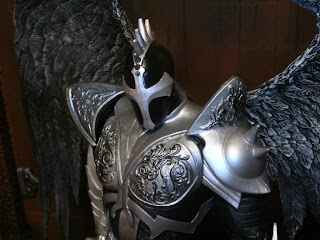 * Check out the pauldrons closely. First, they're nice and pliable so they move well and don't impede the shoulder articulation. Secondly, they also have a really ornate motif on them, like the chest armor. Check out the rear of the right pauldron. The design is echoed on the inside, too. It looks really cool and definitely conveys the idea that this is metal with the intricate design having been etched in from the other side. 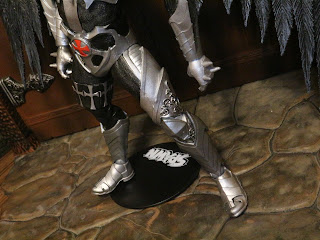 * Asymmetrical footwear for the win! the Dark Redeemer is sporting armor that goes all the way up to his waist on the left side while he's wearing a standard boot on the right and a thigh band with a cross design. Definitely very paladinish, although this guy clearly seems to be a villainous character and not a hero. 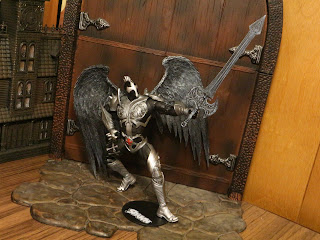 * I'm going to get to the faults of the articulation in a minute (as there are a few) but overall, the figure really does move nicely. McFarlane Toys is making some very cool, very sturdy toys these days and the amount of articulation on this guy rivals pretty much anything else available at mass market. The range of motion might not be quite the same but with a character armored up like this with actual sculpted detail rather than just painted on detail, that's to be expected. The wings are also on swivel/hinge joints so they can move as well. 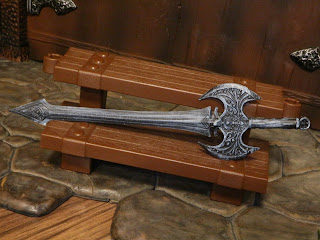 * In the comics it seems like the Forsaken carries a spear but here we've got a repaint of the Redeemer's sword, this time in black and grey. Again, lots of intricate detail, particularly on the hilt (or are those axe-like blades?), and a nice wash to bring out all of the details and make this look worn and weathered. It almost looks like it's made of stone, doesn't it? Like something a gargoyle would carry. 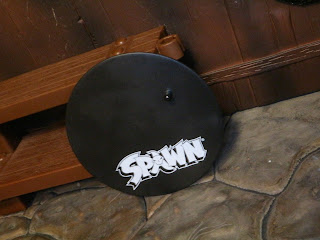 * McFarlane has been including a simple plastic disk stand with all of the Spawn figures. I like the consistency and it's a pretty decent stand, so good for them. While you might want something more heavy duty for extreme poses you should be able to get the Dark Redeemer in a standard pose using this. 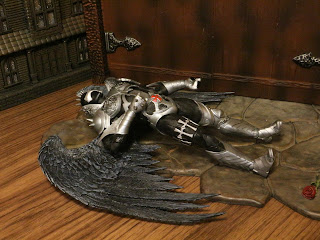 The Negatives:
* But look out! Those wings are heavy! They really do cause the figure to tip over far too easily. Honestly, the Dark Redeemer really could have used a larger stand or even something like a Kaiser stand to keep him upright. If you're planning to pose him with the wings at any kind of severe angles you're really going to have to work something unique out. 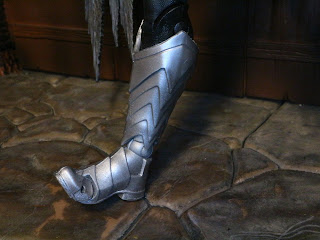 * The ankle joints on the Dark Redeemer are also fairly loose. Well, maybe not loose, but definitely not strong enough to support the weight of this figure in anything but the most vanilla of poses. 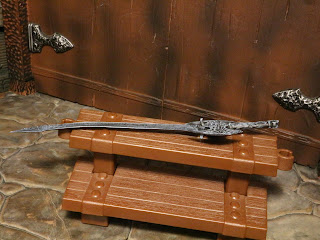 * Lastly, the sword comes out of the packaging very warped. I'm sure with some heat I can get this back to where it needs to be but it's still a bit frustrating. It's nice that the accessories included with the new Spawn figures aren't brittle like the original toys often were but some of the weapons could stand to be a little more solid. She-Spawn's were just about right. 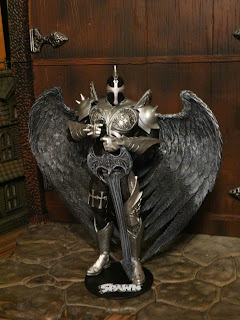 The Dark Redeemer is a very, very impressive looking figure. Great design, intricate sculpting, and a very dramatic paint scheme that really gives this version of the sculpt its own unique feel. The problem is the design of the wings and the way they really weigh down the figure. If you're really going to work on an impressive display setup with some sort of custom stand and maybe strings holding up the wings, I think you'll be pleased. If you're looking for something you can pose on the shelf and display in different ways, well, you might get frustrated. This guy isn't broken by any means and he's quite fun to play around with and pose in hand but he's likely to take a tumble from your shelf if he's not displayed against the wall. With a little more design work he really could have been a gem. He's still a Good and a 1/2 figure, though. If you really like the design or the character pick him up, but not everyone is going to have the patience for posing him.

This is the first figure of the the Dark Redeemer/ Eddie Frank/ the Forsaken I've reviewed. For more reviews from McFarlane's Spawn line check out the following:
The Clown
Cy-Gor
Mandarin Spawn Deluxe
She-Spawn
Soul Crusher
The Violator (Bloody)
Posted by Barbecue17 at 5/01/2022