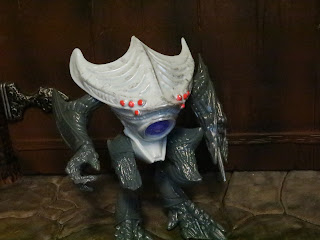 And... here's another Final Faction review from series 1! The Synthoid was released in 2020 and so was this set of extra arms and weapons for the synthetic Kharn troopers. This is a pretty nifty set that really allows you to diversify the Synthoids in your Kharn ranks with not just a different pair of arms but also with some shoulder mounted laser guns. Pretty cool stuff. Let's take a look at the Synthoid Pack after the break... 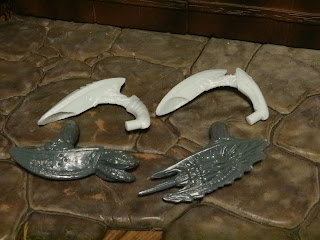 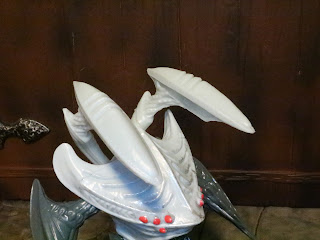 The Positives:
* To start with, the set comes with two "Battle Arms" for the Synthoid. They're shoulder mounted laser cannons that are designed to auto-target "biological enemies." I guess that means they prioritize firing at anything with a pulse, huh? These plug into the ports on the back of the figure and can rotate left and right. 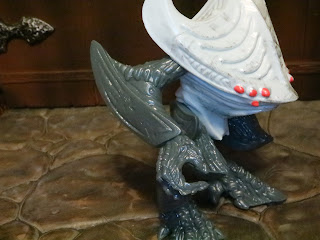 * The "Trap Arm" is actually just a standard right arm. The basic Synthoid only comes with a standard left arm (the right arm included with the figure is more like a bladed weapon) so if you want a standard Synthoid with basic claws, this gives you the option. 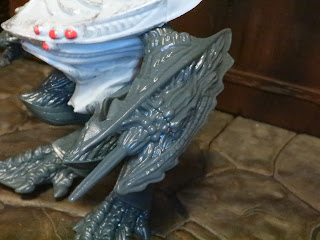 * The cooler arm is the needle arm, a pretty nasty looking weapon that apparently allows the Synthoid to inject "nerve toxins" into its foes. Gruesome! Of course, with how big that needle is the Synthoid might not even need to inject any toxins, as you'd essentially be getting impaled with something again to a giant lawn dart. 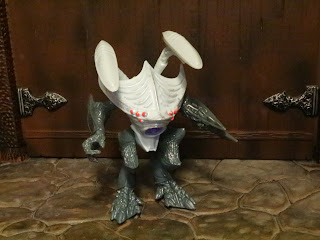 This is a Good set as it's fun to mix and match the weapons and arms on the Synthoid and make different variants. The shoulder cannons are a bit less impressive than I'd hoped for but the needle arm is pretty amazing. This one gets a solid Good. Again, on its own this is a useless set but with a Synthoid figure to equip there's a lot of fun to be had. I'd love to see more Synthoid equipment packs in the future (the Synthoid Evolution set is really cool and one of my favorites so far) as they're very versatile and tons of fun.
For more of the Synthoids I've also reviewed the standard Synthoid figure and the Synthoid Evolution pack.
For more Final Faction reviews check out the following:
A.C.R.M.
Air Assault
Amari
Arrow ATV
Arrow ATV Weapons & Armor
Brute
Brute Striker
Churro & FD-0
Crawler
Decimator
Diabol
Drone
Drone Scourge
Heavy Arms
Huntra
Krepitus
P-131
P-131 Thunderbolt
Riptide
Ruck
The Rumbler
The Rumbler Weapons & Armor
Scope Long Range
Shift
Shock Arms
Spc. Scope
Steadfast
Synthoid
Synthoid Evolution
Torn
Torn Cyber Arms
X4 Turret