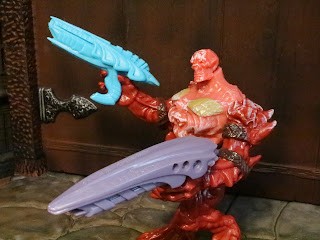 I'm sprinkling in some reviews from the first series of Final Faction figures this month as I neglected to review them when I first picked them up. Today's review from the original 2020 series is the Shock Arms accessory pack, a set of three firearms used by the Kharn. While this set nicely augmented the 2020 Kharn figures, more recent releases like General Diabol and Krepitus can also benefit from some additional weaponry. I love the options here! Let's take a look at the Shock Arms set after the break... 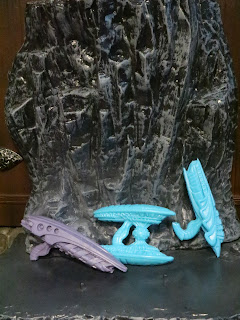 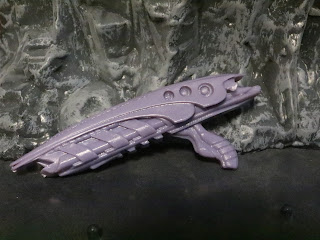 The Positives:
* First up is the Burrower, a gun that "shoots bio blasts that cling and burrow into an enemy attacking nerve clusters."
That sounds pretty nasty, right? The Final Faction team isn't really sugarcoating these weapons or anything; this gun burrows into the enemies body and attacks their nerves. Yikes! Makes me think of the Cerebral Bore from Turok 2: Seeds of Evil for some reason. 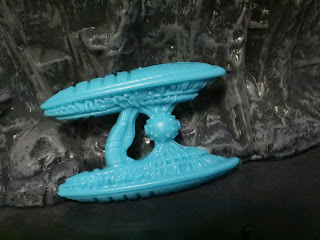 * The second weapon is an energy weapon that kind of looks like the plasma rifles from Halo. It's called the Core Blaster and apparently the ball in front of the handle is n orb of collected energy that can be launched out to cause energy damage over a larger radius. Pretty cool concept and a great design. This one looks fantastic with the larger Kharn troops. 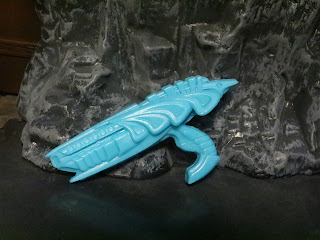 * Last up is the Zapper, an energy weapon that "shoots an energy ball that jumps from one enemy to another getting stronger as it goes."
The descriptions of these weapons on the back of the card are really fun as they definitely help you imagine how these would work. They remind me of weapons you'd in a video game, each with their own strengths and weaknesses. This one is a well sculpted, very standard energy weapon that works well for both the bigger guys and the smaller Drones. 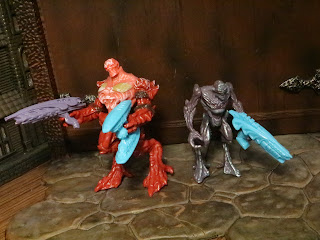 Getting three well sculpted accessories that are each fairly sizeable for around a buck is a pretty good deal. These really liven up your display of the bad guys and can even be used for some other lies, too. Add a little paint and you'd probably have some really impressive weapons for customs. This is a Good and a 1/2 set and it's nice that it's still so easily available. Any Kharn army builders out there? How many of these sets have you purchased? How big is your army? Let us know in the comments below!
I've reviewed many other accessory sets and figures from Final Faction. Check out the following:
A.C.R.M.
Amari
Arrow ATV
Arrow ATV Weapons & Armor
Brute
Brute Striker
Churro & FD-0
Crawler
Decimator
Diabol
Drone
Drone Scourge
Huntra
Krepitus
P-131
P-131 Thunderbolt
Riptide
Ruck
The Rumbler
Shift
Spc. Scope
Steadfast
Torn
X4 Turret
Posted by Barbecue17 at 5/11/2022