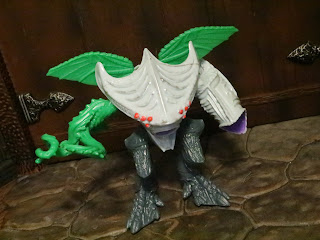 Hey! Since I just reviewed the Synthoid on his own it seems like the right time to review one of his accessory packs. Today let's look at the newest set for the Synthoid, the Synthoid Evolution set. The Synthoids are created by the Kharn to be controlled on the battlefield and apparently they're pretty versatile, kind of like Cobra B.A.T.s. The Synthoids have swappable arms and ports on their packs for different kits and this set lets you re-arm them (literally) and give them flying capabilities. They fly now? Oh yes. They fly. Let's take a look at the Synthoid Evolution set after the break... 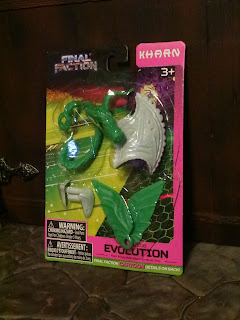 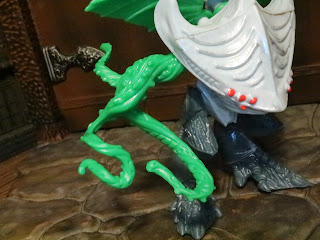 * First up is this arm made of vines which the packaging calls the Azhorra. Is this some kind of living, sentient plant that can be attached to the Synthoid? it seems that way. It's got multiple vines and some little spiky protrusions on it. Reminds me of the Devil's Snare from Harry Potter and the Sorcerer's Stone. 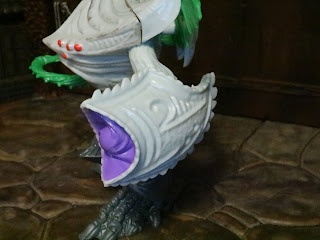 * For the left arm you can equip your Synthoid with the Ctagoth, which is what your dad says when he wants to point out those kids with pale white makeup and all black clothing hanging outside of the Hot Topic. It's actually a plasma cannon of sorts and, according to the package: "The plasmoid discharge of the Ctagoth cripples man and machine, leaving both torn asunder." 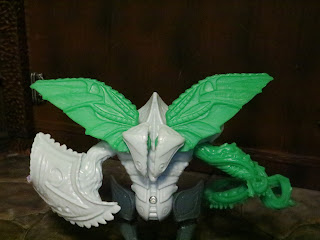 * Last up are the Wythrym, wings for the Synthoids and proof that the Final Faction team are clearly just using random nonsense chains of letters from a Boggle set to name these Kharn weapons. Wyhtrym would be worth 5 points in Boggle if your gaming crew acknowledges the Kharn language. These are actually pretty cool wings that attach to two pegs that fit into the back of the Synthoid. The wings can then move up and down a bit as well as sliding forward and backward on the rod. 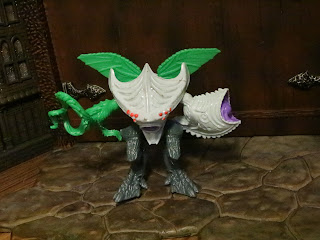 This set really spices up the Synthoid, making a very different looking creature than what you had before. It's a Great set and quite fun to mess around with. I like the designs but I also like the green color used here. The splash of green really adds something to the silver and blue of the Synthoid, helping the new pieces to really stand out. I haven't reviewed the original Synthoid Arms pack yet but it's coming soon, don't worry. This one is a pretty strong set too, though, and fans of the creature can definitely have some fun with it. I'd love to see the Synthoids get new upgrades fairly frequently. They seem like something the Kharn would just keep tinkering with.