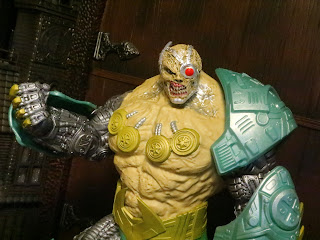 I was really looking forward to Overtkill showing up in the new Spawn line and it didn't take him long to finally make his appearance. This isn't the Overtkill I remember from childhood, however; this guy is much more gruesome and zombie-like. I was actually kind of shocked at first but it appears that Overtkill has been brought back from the dead in the comics and this version is based on his more recent appearances (which I haven't read yet). I was very on the fence about this figure at first as some of the promo shots just looked off. When I saw him in stock online at Target, however, I decided to jump on him. One or two folks on some of the Spawn Facebook groups already had him and he looked pretty decent. I was pretty excited for his arrival and was thrilled when I got the notification that he had arrived at my door. I called my wife and asked how heavy the package was, as I was expecting him to be a beast like Violator. I was a bit surprised when she said the box really wasn't that heavy at all. When I got home and picked up the package I started t think that maybe Target had sent me something else but nope, Overtkill is actually way lighter than I expected. I guess he probably was intentionally designed this way to better accommodate posing and such. So, how is this version of Overtkill? Let's take a look and see after the break... 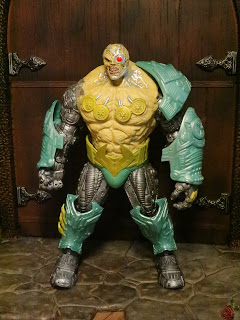 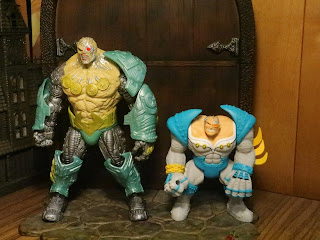 * Just for fun here's a shot of the new Overtkill (left) and the original 1994 Overtkill (on the right). The basic colors and some shapes are the same but they're obviously two completely different styles of action figures. 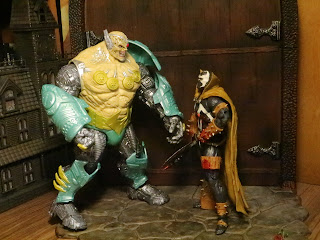 * Overtkill is a Megafig and he definitely is taller than Spawn. Wider, too. He's a really big guy and does look impressive when going toe to toe with any of your standard modern Spawn figures. If it helps you to visualize things, Overtkill is definitely larger than any modern Hasbro Marvel Legends build-a-figure I own. 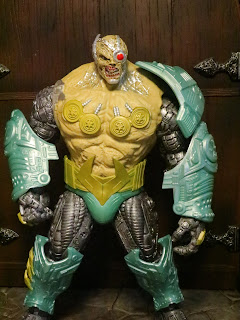 * I like the design of the figure. While I loved Overtkill as a cybernetically enhanced assassin, I'm also loving his zombified look. In hand his skin has a grayish pallor to it that definitely looks sickly and unnatural, and it really stands out against his metallic bits. There sure are a lot of those aforementioned metallic bits, too! Overtkill's limbs are pretty powerful looking with mechanical musculature and lots of plates and bolts and such. It's a good sculpt and while the paint isn't quite up to the level I expected from McFarlane Toys, it's still an impressive looking figure. 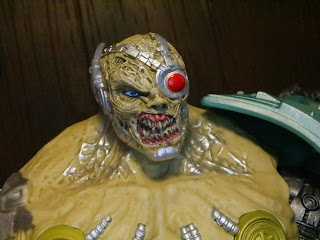 * The head is an area that I'm not at all disappointed with. That is one heck of a headsculpt for Mr. Nicholas Rocca. Look at the eyes and teeth. Well, eye. Those teeth are really hideous, though part of that may be because his lips seem to be missing. Like, "ripped off of his face" missing. He kind of reminds me of the Nemesis from Resident Evil 3, which is a great thing. 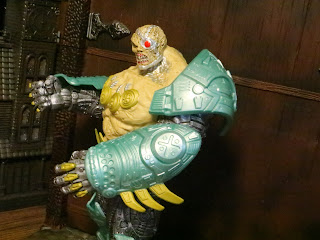 * Overtkill is covered with plats of armor that are separate pieces attached to his mechanical limbs. They definitely look shinier and much newer than the rest of the figure, so I'm guessing Overtkill has had a bit of an upgrade at some point. I like the spiked blades on his left forearm, too. They definitely look like they'd be useful in a fight. That oversized pauldron he wears is also on a balljoint, so it can move around with his shoulder articulation. 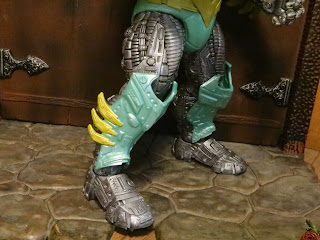 * With mechanical legs and feet I'm sure you can hear Overtkill coming from quite a ways. He's sporting shin guards for extra protection and the right one has some spikes on it. Hey! Asymmetrical footwear again! That's a McFarlane Toys trademark right there. 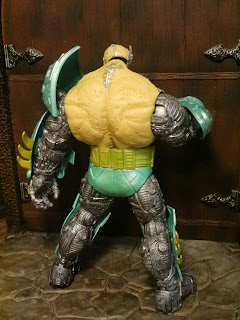 * Here's a shot of Overtkill from the rear so you can see all of the detail on his zombified back and on his limbs a bit better. 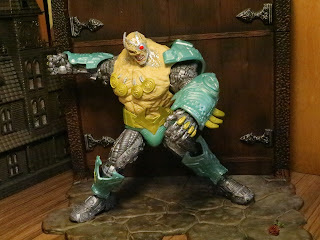 * I'm really impressed by how sturdy and durable all of McFarlane's Spawn released over the past year or so have felt. These are definitely meant to be posed and played with, something that definitely differentiates them from so many of McFarlane Toys' past releases. Overtkill might not be super-articulated but he moves quite well for a big guy. His torso is hollow which helps make him lighter and allows for better posing. His balljointed waist has an impressive range of motion and is well hidden by his belt. 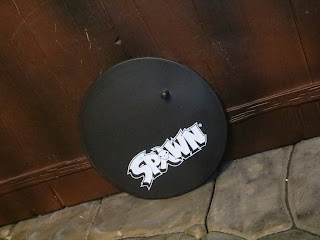 * All of McFarlane's Spawn figures come with a simple display stand and while most of the Megafigs ought to have larger stands, this one still does work quite well for Overtkill. 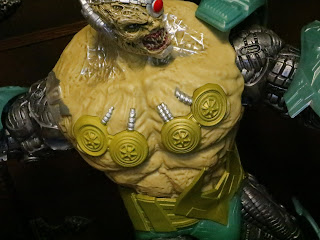 * Overtkill's chest looks a bit off. While he's cybernetically enhances, the torso doesn't look as effectively like a blend of mechanical and flesh as it should. There's something off about the sculpt and paintwork, particularly where the wires and flesh meet. A bit more detail feels needed and a bit more paintwork to sell the effects. 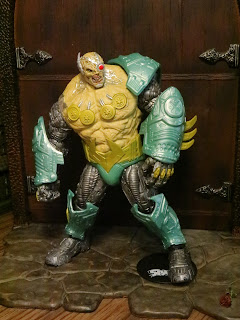 I do like Overtkill but I'm not sure he feels like a $50 dollar figure. Maybe $40? For what you're getting he's still pretty substantial and fun with an overall nifty sculpt and decent paint applications, but he doesn't feel comparable to, say, the Violator. I wish he maybe had a few more paint applications, some alternate hands, or perhaps even an accessory or two. How awesome would it have been if this version of Overtkill came with a parking meter that he could use as a club, just for old time's sake? Still, he does get a Good and a 1/2 rating from me. I do like his size, the look of his armor, and the headsculpt. It's a fantastically gruesome visage. If you wait a bit you very well may find a good sale on Overtkill which would probably make him a better figure. Still, he is a fully unique figure who is over 9 inches tall, so that's worth nothing. Seriously, though; I want that parking meter. Now, any chance we'll get Tremor or the Heap? Or that bison guy. Sabre, right? I'd sure like to have those guys.
If you're a fan of Overtkill, check out my review of the 1994 series 1 Overtkill.
For more Spawn reviews check out the following:
The Clown
The Clown (Bloody)
Cy-Gor
The Dark Redeemer
Mandarin Spawn Deluxe
She-Spawn
Soul Crusher
Spawn (Deluxe Set)
The Violator (Bloody)
Posted by Barbecue17 at 5/18/2022