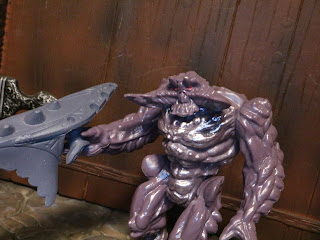 I'm going to be reviewing a lot of Final Faction toys this month; some new and some from the first series which I never got around to reviewing last year. I'm going to be reviewing the Brute Striker accessory pack soon but before I do that I had better review the Brute. The Final Faction toys, specifically the bad guys, definitely remind me of characters from a video game like Gears of War, Halo, Doom, or Brute Force. How many games have some generic enemy cannon fodder called brutes? Well, Final Faction has a Brute as well. These are some bulky, burly Kharn troopers who are heavily armored and seem like they're ready to deal some severe melee damage. Let's check out the Brute after the break... 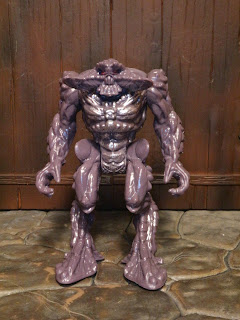 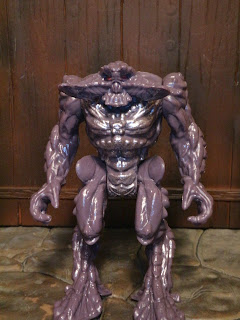 The Positives:
* The Brute is definitely reminiscent of the Drone but he's quite a bit thicker. Does this guy lift, bro? You'd better believe it. He's a burly beast who is covered with an armored exo-skeleton. He's pretty cool looking. The figure is simply molded in purple plastic but there are some cool metallic highlights that keep him from looking too flat. 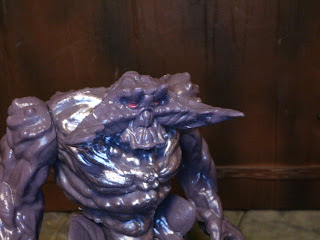 * This guy's got an ugly mug for sure. His two beady red eyes are set back within his skull and he has two horn-like appendages on the sides. Kind of like some sort of demon or maybe even the Predator. 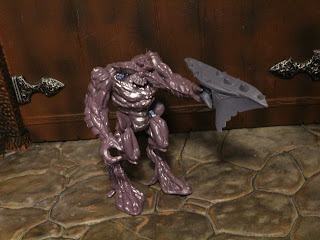 * Like most other figures in this line, the Brute is sporting 5 points of articulation. He's fairly sturdy and does what you'd expect a figure with five pointsof articulation to do. 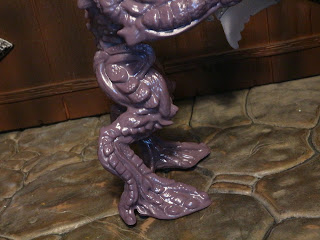 * The Brute is also sporting the funky cool legs that the rest of the Kharn are sporting. They're armored and kind of reptilian. 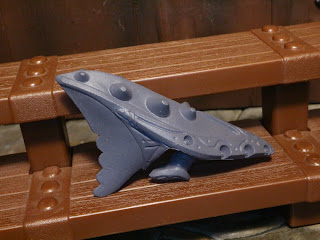 * I really like the Brute's weapon. It's some sort of handheld battering ram with studs on top and a massive blade on the bottom. Imagine the damage this dude would cause swinging this bad boy around? 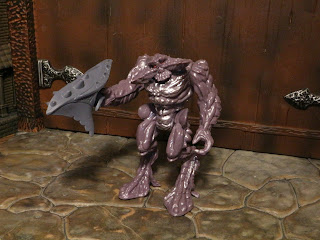 The Brute is a really cool figure. He might be one of my favorite members of the Kharn. He's intimidating for sure and he has some really cool sculpted details and that slick silver finish. Plus, his weapon is just really cool. He's an ugly bugger, too. This guy gets a Great and a 1/2 for me. Imagine being able to army build an oversized brute like this for less than $10 bucks? That's amazing! I have two Brutes so far (one for the accessory pack I'll be reviewing shortly) but who knows if I'll add more at some point? This guy is definitely menacing, assuming you're 1/18th scaled.
This is the first Brute I've reviewed. For more Final Faction reviews check out the following:
A.C.R.M.
Amari
Arrow ATV
Arrow ATV Weapons & Armor
Churro & FD-0
Crawler
Decimator
Diabol
Drone
Drone Scourge
Huntra
Krepitus
P-131
Riptide
Ruck
Shift
Spc. Scope
Steadfast
Torn
X4 Turret
Posted by Barbecue17 at 5/05/2022