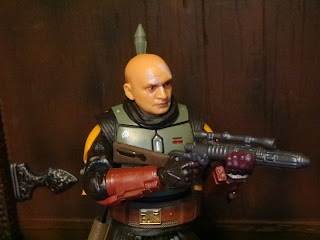 Well, I bit the bullet and picked up the deluxe Boba Fett (Throne Room) figure from Hasbro's Star Wars: The Black Series. Billed as a deluxe figure, Boba comes in a larger than normal box with a price tag about $7 dollars higher than usual (around $32 at Walmart). I really feel like this is an instance of Hasbro using the "deluxe" case packing (a full case of the same character) to make Boba Fett more readily available and using the "deluxe" pricing to make him a bit more profitable. While this figure is sourced from The Book of Boba Fett, he's really based on Fett's appearance in the stinger at the end of season 2 of The Mandalorian, as he's wearing his more billowy robes rather than the pants and boots he wore during most of BOBF. I'm sure Hasbro will release that figure at some point in the future. There's a Walmart exclusive Boba Fett from Mando Season 2 when he first gets his armor (it's called Boba Fett (Tython Jedi Ruins) that seems to reuse most of this figure so it seems likely we'll be seeing lots of Boba Fett figures in the near future. Let's check out the one I've got in front of me, though. Join me after the break... 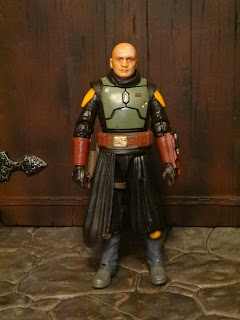 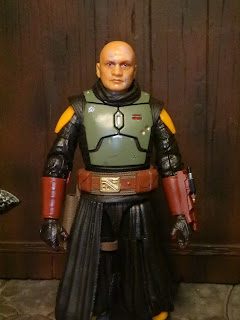 The Positives:
* Here's Boba! After assisting Din Djarin, Boba apparently spent some time cleaning up and repainting his armor. While the dents aren't coming out (you know, since it's beskar) everything else looks newer and cleaner. It's not as visually interesting as, say, the Return of the Jedi armor, but it definitely makes Boba Fett look more regal and authoritative. The paintwork is neat and clean but it's not as complex as the Fett armors that have come before (despite being billed as a deluxe figure due to his paint applications). The sculpt is good and nicely captures the details of the outfit and armor plating as well as Fett's changed shape. Temuera Morrison's Boba Fett is a bit bulkier than Fett in ROTJ and Hasbro nicely captured the change. 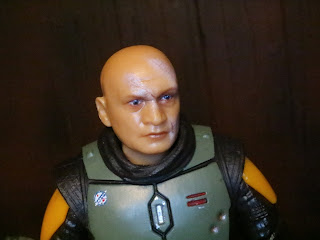 * Like the Boba Fett (Tython) figure, the portrait captures Temuera Morrison's likeness quite nicely, particularly his facial features. Boba Fett is still recovering from the injuries sustained during his time in the Sarlacc Pit and his time in the Tatooine desert and those wounds and scars, in various states of healing, are visible on his head. Parts of his head are paler, showing off the healing flesh. The eyes look fantastic; they're very piercing! 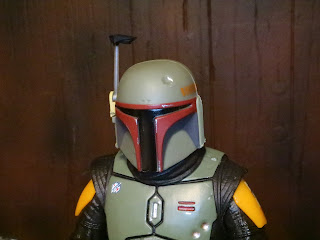 * Boba Fett's helmet looks fantastic. It's a separate piece (not an alternate portrait or anything) and the shape and paintwork look incredible. The colors here really standout nicely and Boba looks fantastic sporting his signature helmet. 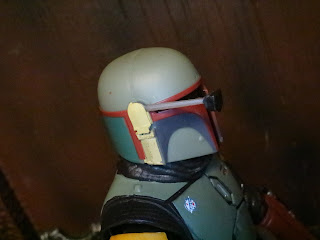 * The range finder is articulated and pivots down so Fett can find his targets a bit more easily. 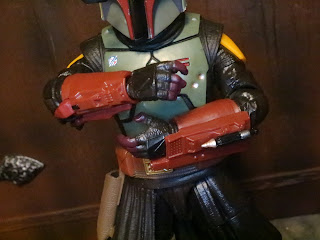 * Boba is still carrying his weapons filled gauntlets though they've gotten a paintjob. It does obscure some of the detail but it makes them look newer and shinier. There are some missing paint applications here which Hasbro definitely should have added, especially with this as a deluxe figure, but the sculpt is nice. 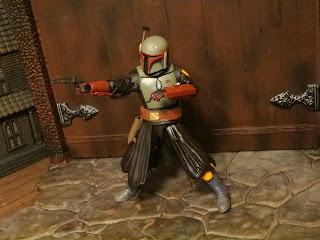 * Boba Fett's outfit is a bit bulky with chest armor, shoulder pads, and the robes he's wearing underneath the armored plates but overall it doesn't restrict movement too much. He's as well articulated as any other Black Series figure and even has the lateral "butterfly" hinges that many of the newer figures have. He's fun to pose and mess around with and is as sturdy and durable as you'd hope him to be. 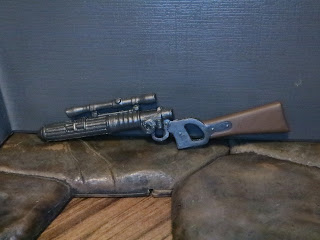 * Boba Fett carries his EE-3 Carbine and it's a different sculpt from what we've previously seen. Boba Fett's original rifle got cut in half by Luke during the Battle of the Great Pit of Carkoon, so he's had to switch to a different weapon. It's a solid sculpt with a painted stock. The handle is a bit on the smaller side but it does fit in the figures hand with a bit of work. 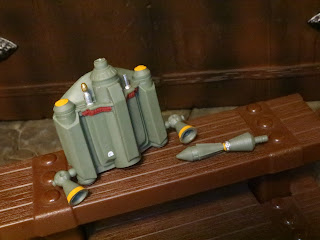 * Boba Fett's backpack appears to be the same sculpt as the ROTJ deluxe figure but with far fewer paint applications. It does have the swiveling thrusters and the removable missile, though, so that makes it pretty fun to mess around with. 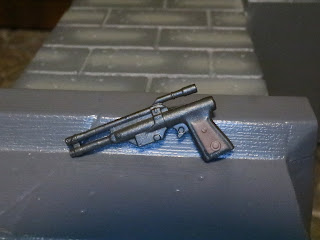 * Boba Fett's new blaster pistol doesn't have an official name yet but it's a cool looking blaster. Very simple and rugged. This one has a nice sculpt and fits the figure perfectly. 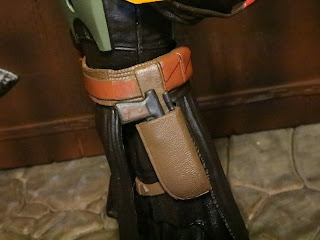 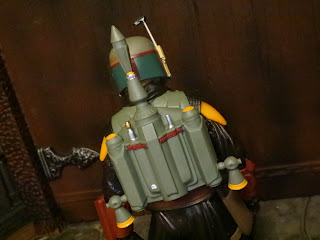 The Negatives:
* Boba Fett's jetpack has a really weird paintjob. I cannot find any reference photos of a color scheme like this. This is the best I can find and it doesn't look like what Hasbro released. Seriously, they bragged about paint applications on these deluxe figures and then deliver this? 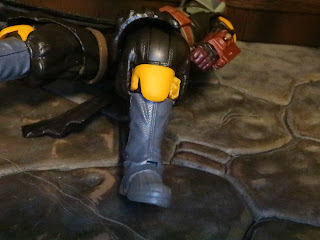 * Boba Fett's boots and kneepads are also very dull looking. Seriously, no paint applications to add any depth or anything. It feels like a rather cheap move for a figure touted to have deluxe paint applications. 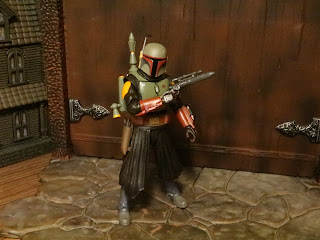 On one hand, I do really like this figure. The sculpt is good, particularly the headsculpt, the helmet is excellent, the weapons are nice, and it's just a very fun look for Boba Fett. On the other hand the paint applications seem a bit sparse for a deluxe figure, as do the accessories. included. Hasbro is going to get a lot of mileage out of most of these sculpts so we'll probably see Boba Fett quite often. Many of the current standard Black Series figures have been incredible and as a basic figure this would have been more satisfying. As a "deluxe" release, though, it gets a Good and a 1/2. There are plenty of Black Series figures that seem to have more accessories and the paint applications aren't any more impressive than most other figures, so I'm guessing we're paying extra because this is Boba Fett.
If you're a fan of Boba Fett then check out my other Boba Fett reviews on the site, including the Black Series Phase I Boba Fett, the Walgreen's exclusive Boba Fett (Prototype Armor), Boba Fett (Carbonized), Boba Fett (Tython), and the deluxe ROTJ Boba Fett, both the standard Hero Mashers Boba Fett and the Han Solo Vs. Boba Fett two-pack version, the Funko POP! #102 Boba Fett, and Boba Fett as a background character in the Bossk Micro Machines Mini Head and in the 4-LOM Micro Machines Mini Head.
For more Star Wars: The Black Series reviews check out the following:
332nd Ahsoka's Clone Trooper
Admiral Ackbar
Ahsoka Tano (The Clone Wars)
Ahsoka Tano (The Mandalorian)
The Armorer
Asajj Ventress
Aurra Sing
Bib Fortuna
Boba Fett
Boba Fett (Tython)
Bo-Katan Kryze
Cad Bane
Clone Trooper (Holiday Edition)
Crosshair
Darth Vader
Din Djarin (The Mandalorian) & The Child
Dr. Evazan
Fennec Shand
Garazeb "Zeb" Orrelios
General Lando Calrissian
Greef Karga
Han Solo (Endor)
Hunter
Imperial Stormtrooper
Incinerator Trooper
Jar Jar Binks
Jaxxon
Kuiil
Luke Skywalker (Endor)
The Mandalorian
Mandalorian Loyalist
Mandalorian Super Commando
Moff Gideon
Phase I Clone Trooper
Phase I Clone Trooper Lieutenant
Ponda Baba
Princess Leia Organa (Endor)
Princess Leia Organa (Yavin 4)
Q9-0 (Zero)
Range Trooper (Holiday Edition)
Remnant Stormtrooper
Rey (Dark Side Vision)
Sith Trooper (Holiday Edition)
Speeder Bike, Scout Trooper, & The Child
Tech
Teebo (Ewok)
Wrecker
Posted by Barbecue17 at 5/28/2022