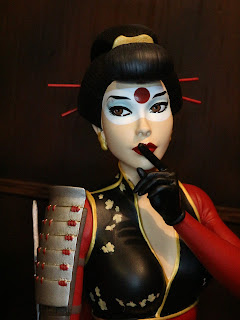 DC Collectibles has pretty much given up on current comic based figures. And DC Icons. And video game based figures (Really? Nothing from Injustice 2?). And movie based figures. Heck, there really isn't a lot DC Collectibles has going on right now that excites me or that DC Collectibles seems to have any faith in. Thankfully, DC Bombshells is still rolling right along and just seems to keep getting better and better and better. I am absolutely a sucker for the Bombshells aesthetic and collect the statues and the action figures. Heck, I even dig the Lil' Bombshells line. When it comes to the Bombshells statue line I'm not a completest, but I do pick up the ones I really like. Katana is my seventh statue in the series. She's the 19th release in the line (not including the various holiday releases) and hit stores in February of this year. I finally picked her up last month and have been waiting for a chance to review her. Today's the day! Let's take a closer look at the Bombshells version of Katana after the break... 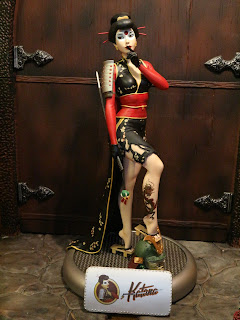 Accessories: Magnetic name plate and magnetic arm (not an accessory, really, but it does come packaged separately). 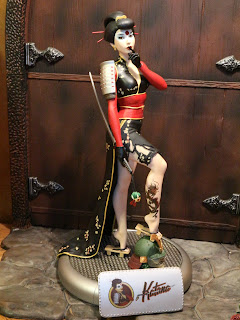 * If there is an area where I think most of the Bombshells statues excel other than just the cleverness of the designs, it is in their posing. Based on the incredible illustrations of Ant Lucia, the sculptors working on this series have done a great job of making each piece interesting. I'm not a fan of a statue that has no life to it or that represents a character just standing around awkwardly, and fortunately those are problems most Bombshells avoid. Katana looks great. She's both seductive and deadly, combining an awesome 1940s aesthetic with some more modern elements and an Asian motif fitting for the character. There are enough design elements here that clearly show this is Katana, yet not so many that a passerby would look at this and think "Superhero." 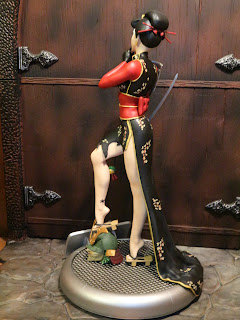 * Here's a view of the rear of the statue so you can see the entire piece of art. 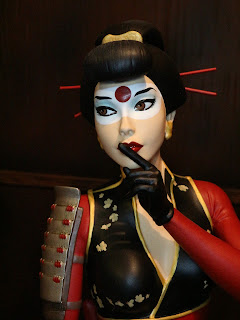 * I don't want to jump in and make any overly bold proclamations yet, but it's quite possible that Katana is the most gorgeous Bombshells statue I own (FYI I own both Batgirls, Mera, Zatanna, Batwoman, and Hawkgirl). The face is perfect, mixing together the softness and beauty of the pin-up aesthetic with Katana's non-nonsense attitude. The paint, especially on the eyes, is perfect. The rendering of her face mask as face paint is also a good design choice. 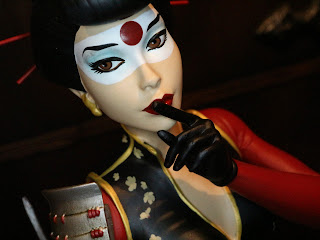 * I love the "shushing" gesture. It not only gives Katana's left hand something to do but it adds a bit of mystery to the statue. Who is she silencing and why? Combined with the sword she's wielding in her right hand and the defeated helmet she's standing upon, it transforms what could be just a cute gesture into an intimidating one. 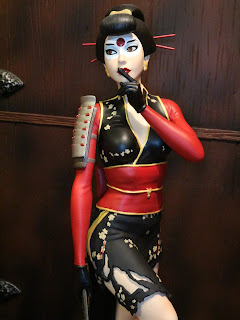 * Katana's outfit is great. She's wearing a long black dress with gold trim, red sleeves, and a red sash around her midsection. The colors definitely align with some of Katana's more recent looks, but that's not a bad thing at all. Katana has had a surge in popularity of the past couple of years, so it's smart that DC is working to make her an easily recognizable character. 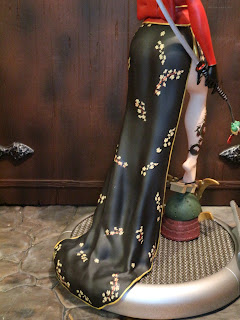 * Not only is the sculpt and the paint work on the train of Katana's dress impressive, but I'm really digging how it flows off of the base. That's just a really cool feature. 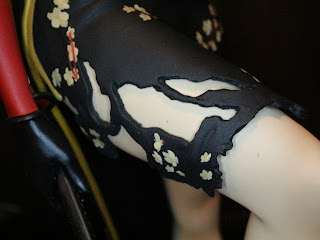 * Another cool detail that I honestly didn't catch until I was photographing the statue are these tears in the dress around Katana's right thigh. This goes even further in telling a story: Katana is clearly involved in something right now! 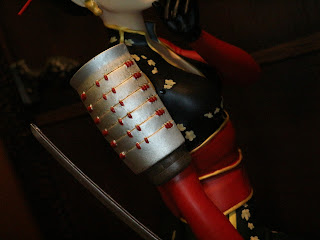 * Is this called a sode? I think so. Anyways, it's a recognizable element from Katana's New 52 costume and it fits the design of the statue, so it's inclusion is double warranted. I love the design on it. 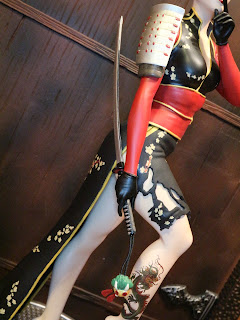 * Katana is wielding her Muramasa forged blade "Soultaker" in her right hand. The sword is very nicely sculpted and Katana is holding it in a rather interesting way. I should also point out that Katana's right arm is held on via a very strong magnet. It comes packaged separately (to help avoid any breakage of the blade) which I think was a wise decision. 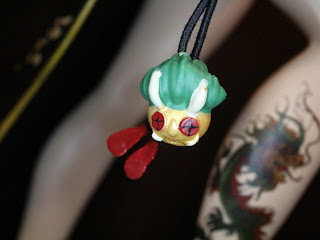 * Hanging off the grip of the sword is a little Oni decoration. While definitely not something that I've ever heard being toted around on the hilts of swords (although I could be wrong), it's a cool little design element. 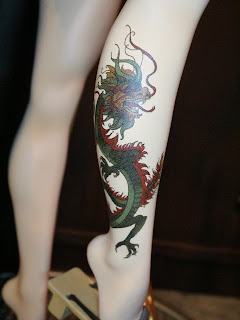 * Another cool design element that adds a modern vibe to the statue is this rocking dragon tattoo on Katana's right leg. The paintwork is gorgeous on this! 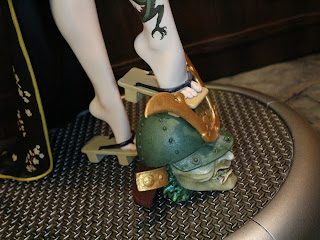 * It's very cool that Katana is standing atop the head of one of her enemies. That's what it looks like, anyways. Whether this is just an elaborate samurai helmet or some sort of oni, Katana definitely looks incredible. Having her not just standing flat and even really makes the statue pop. 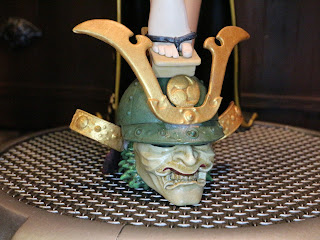 * Here's a close-up of the creep oni mask this guy was wearing. Or, heck, maybe that's his face and Katana just straight up killed a demon. She's pretty tough, so that could totally happen. I mean, she helps keep the Suicide Squad in check. You know she's far more powerful than most people give her credit for. 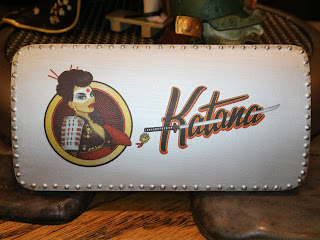 * Katana has the same "metal panel" nameplate design as every other statue in the series. That kind of consistency is definitely important in a statue line, though. The stylized Katana name and the little image of Ant Lucia's artwork looks perfect together. I love how Soultaker runs through Katana's name. This piece is attached via a magnet, probably to help the statue ship more safely. 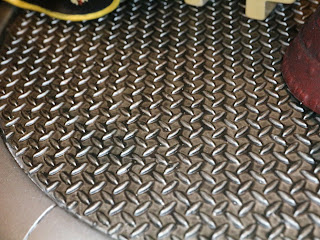 * Here's a close-up of the steel-like base of the statue. Again, DC Collectibles has been very consistent with this series which I think absolutely helps a statue line to maintain a following. 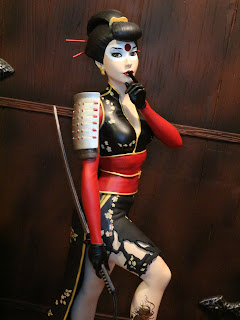 Hawkgirl and Batwoman are my two favorite Bombshells, but I'll admit that Katana is right up there with them in my personal favorites. Looking at her sculpt, design, and paintwork, Katana very likely is one of the best statues released in this series. Jack Matthews is a talented sculptor and this statue is quite a masterpiece. I've given DC Collectibles some flack lately for how they've mishandled their comic based lines, but they absolutely no how to do some great production work with Bombshells. Katana is an Epic statue; she's absolutely one of the most impressive statues I own. I couldn't be more satisfied! She seems to have sold-through pretty quickly, which is good to see as the Bombshells have definitely been getting into the C-list characters a few times lately. Hopefully the design aesthetics of this popular line help elevate the popularity of a few of the lesser know superheroes of the DC Universe. That'd be unusual for sure, but Bombshells has been an unusual property for DC that seems to have really paid off. If you dig the property but haven't read the excellent Bombshells comic series by Marguerite Bennett, you need to! It's equally incredible!

If you're looking for more DC Comics Bombshells statues, check out the others I've reviewed: