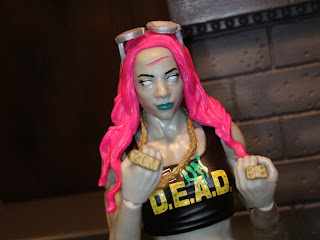 Ready for another WWE Zombies review? I hope so because today I'm checking out the zombified version of the 3 time WWE Women's Champion and legit boss herself, Sasha Banks. Sasha Banks is a pretty cool looking figure and really adds a splash of color to the WWE Zombies line thanks to her bright pink hair. Sasha is easily in my top five favorite female Superstars currently on the roster and is without a doubt one of the most talented in ring performers in her division. Mattel did a pretty impressive job of translating Sasha Banks' appearance into the zombie line, so let's check out the impressive work they did. More after the break... 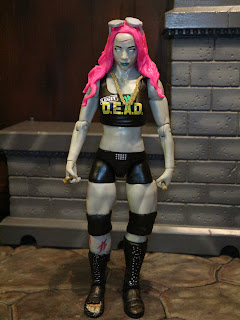 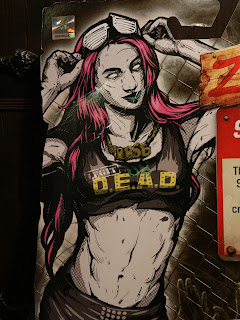 *Before main eventing this Hell in a Cell of a review, I do want to point out how cool the art is on these packages. I really like the zombie artwork for the WWE Zombies! The design team working on these is clearly having a great time and getting the chance to be creative. 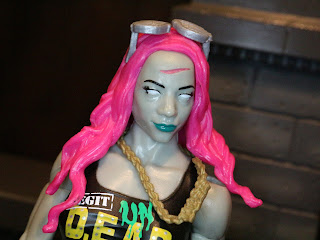 * One of the things I find to be really interesting is that the zombified headsculpts, while featuring soulless white eyes and random bits of damage, really do an incredible job of capturing the likeness of the superstars. The headsculpt and the cool pink hair dead on resembles Sasha Banks. I love the teal lips, too. Excellent work! 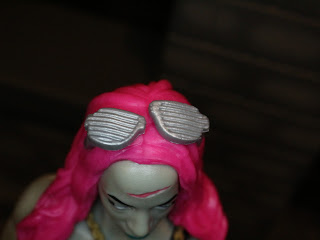 * Sasha Banks is well known for her stylish glasses so it's only fitting that her zombified counterpart is running around with a pair too, right? Turns out that these glasses are broken in the middle. They're actually two separate pieces, still stuck in her hair, and molded in silver. This is a great detail! 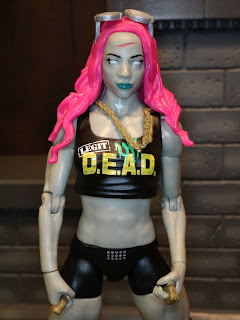 * Sasha's outfit is a bit basic and there's not a lot of extra damage on her body (unlike some of the other zombies) but her t-shirt is cool. Instead of being a Legit Boss, Sasha is proudly being labeled as being "Legit UN D.E.A.D." Nifty! I love this design. The printing is also very, very near and clean. 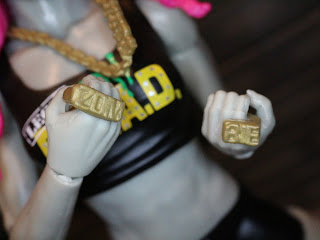 * In place of the usual... rings? Brass knuckles? I'm not sure what to call them, actually. Anyways, besides ones that say BOSS or something, Sasha is sporting a pair of finger dusters that say "ZOMBIE." I dig it. These are not removable (they're separate pieces that seem to be permanently connected to her hands) but they really do allow for some very cool poses. 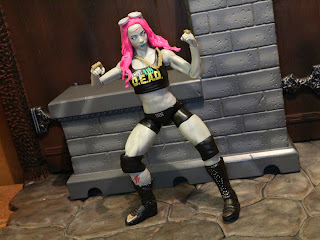 * While Mattel has a different articulation for their Basic and Elite male superstars, the women all have the same model and it's much closer to the Elite model, so you're effectively getting an Elite version of Zombie Sasha Banks here. She feels really solid, even on her thinner arms. I've often felt like the arms were weak on some of the female figures but Sasha seems much sturdier. 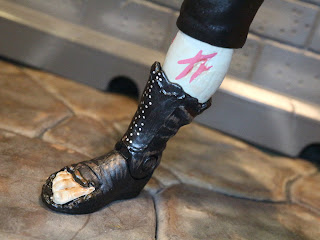 * As I mentioned above, Sasha doesn't show nearly the amount of zombie damage that some of the other figures in this series do. Other than on her head, the only damage she's sporting is on her right leg and foot: She has a couple scratches and the toe of her right boot seems to be missing. That's a pretty cool sculpted feature with some decent paintwork. 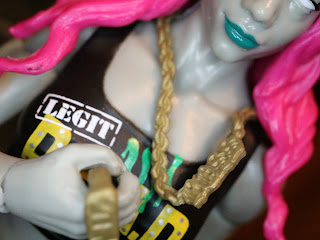 * I like that Sasha is sporting her "Boss" necklace but the necklace is very, very warped. There is no way (so far as I can tell) to get it to sit flat. It ends up hanging at weird angles that even a zombie couldn't manage. 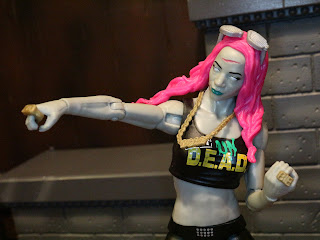 While Sasha doesn't have nearly the amount of grotesque details on her as most other figures in the line, she does have some really cool unique features and a color palette that really stands out. When you pick up Sasha, you're also essentially getting an action figure with the deluxe Elite styled articulation. Sasha Banks is a legit Great figure well worth picking up. Heck, this whole series is. I have a suspicion that there are plenty of collectors who will absolutely overlook this line but I think it's one of the coolest ones out there.

If you're looking for more WWE Zombies, check out the following: