Minifigure Review: Pack B from M.U.S.C.L.E.: Mega Man by Super7 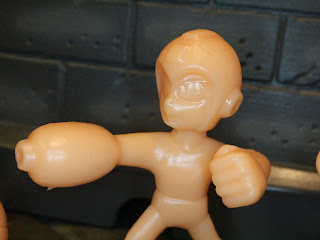 As someone who absolutely loves minifigures, particularly M.U.S.C.L.E., it hurts my hear that Super7's Mega Man M.U.S.C.L.E. figures are so terrible. Yeah, that's a spoiler for the rest of the review. Oh well. If you read my reviews fairly often, you might come to the conclusion that I'm not too harsh of a critic on most toys. That's partially because I usually buy stuff I'm predisposed to like but also because most modern action figures and toys that I pick up are actually pretty decent. Something happened with Super7's recent efforts on the Mega Man minifigures, though: The plastic is overly shiny, the figures feel bizarre (kind of oily/ sticky and not at all "solid"), and the sculpts are pathetically soft. Compare these to the Street Fighter II M.U.S.C.L.E. figures Super 7 released earlier this year and you'll wonder what happened. How did the same company release some of the greatest minis ever and some of the worst in such a short span of time? Who knows? Since I bought them and opened them, I feel compelled to at least review these as a cautionary tale for anyone who might be contemplating them! 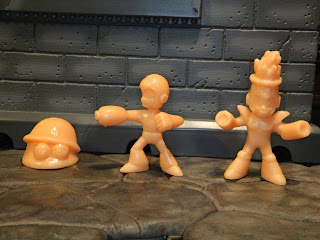 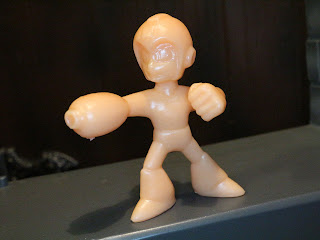 * While Pack A included the default vanilla Mega Man, Pack B includes the "firing" Mega Man with his Mega Buster cannon on his right arm. The pose is great but, again, the sculpt is barely visible. This is not a matter of bad pictures: These really look under detailed in person! I would have loved to have had a good Mega Man mini to fit in with my M.U.S.C.L.E. figures, but he's a let down. 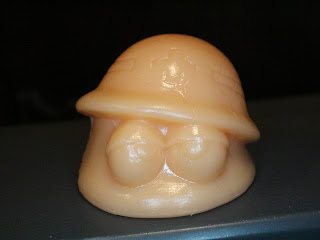 * Metalls (also known as Mets, Mettools, or Hart Hats) are little minion guys, not unlike Goombas. I love minifigures that come in unusual shapes and sizes (think the various Sunshine incarnations from the vintage M.U.S.C.L.E. line) but this little guy looks so plain that you could almost pass him off as a random droplet of plastic slime. 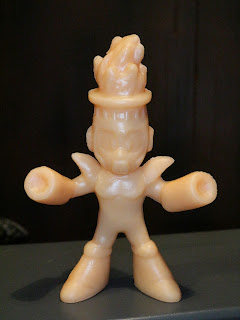 * You know who Fire Man looks like? Firestorm. That's who. He's one of the better figures in this series simply because his silhouette is recognizable and a bit unique. Still, the lack of detail just kills the coolness of this figure. 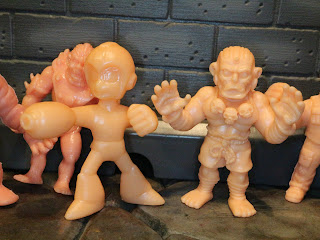 * Here's a comparison between Mega Man fro this set and Dhalsim from the Street Fighter II series released just a few months back. What the heck happened? Dhalsim has beautiful, crisp, intricate sculpting, a great plastic quality, and actually kind of looked like an updated M.U.S.C.L.E. Mega Man looks like a bootleg vending machine toy from the 1980s, but not in a good way. 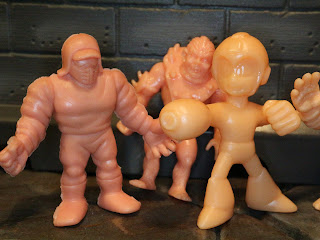 Heck, Mega Man is incredibly inferior to a vintage M.U.S.C.L.E. figure. This set disappointed me so much that I actually cancelled my Masters of the Universe Classics preorders from Super7. In my eyes, if they can't get the quality control right on a simple minifigure, who knows what will happen with a more intricate and larger scaled action figure. I like Super7 and I want them to succeed, but Mega Man isn't giving me any confidence. Crap and 1/2 work here, sadly.