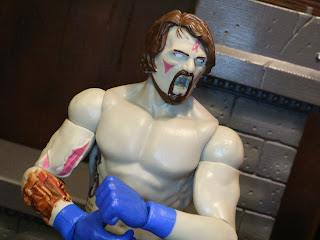 You know what? the only WWE figures I've purchased this year have been from the insane but awesome WWE Mutants line. I love the figures from that line that I picked up, but there was one WWE line I was really looking forward and ordered the whole set ASAP: WWE Zombies series 2! Last year Mattel's WWE Zombies line was one of the best things about Halloween 2016 and I'm glad that the concept seems to have proven popular enough to warrant a second outing. Yeah, they're not your typical WWE figures, but I really like them. Whether you love the concept of the WWE Superstars as zombies or just like pretty slick zombie action figures in the 6-7 inch scale, these should scratch a (possibly necrotic and infected) itch. First up in my review of series 2 is the Face that Runs the Place and the Champ who Runs the Camp: It's the Phenomenal One, AJ Styles! Since I'm most likely going to be cheering for AJ Styles at Money in the Bank tomorrow I figured I'd give him first dibs in the reviews. Let's check out yet another Georgia zombie after the break... 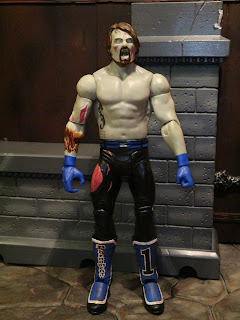 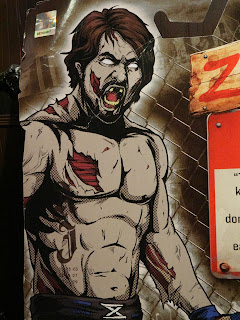 Before jumping in fully, I do want to point out how cool the art is on these packages. I really like the zombie artwork for the WWE Zombies! 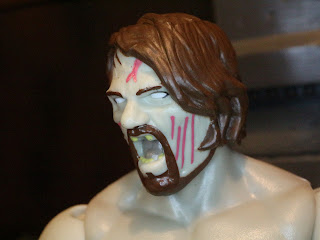 * Taking into account the zombieized elements of AJ (the yellowed missing teeth and the various claw marks on his cheeks and forehead), this figure still has a pretty good likeness of AJ Styles. Mattel has done a great job of capturing AJ's current look with the awesome "soccer mom" hair and his beard. I'm digging the fierce expression, too. Let's hope AJ gets fierce at Money in the Bank and walks out the winner! 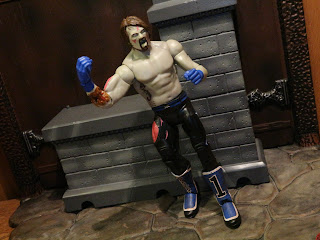 * For the non-WWE collectors, Mattel essentially has two different product ranges: Basics and Elites. Elite figures have more articulation, like a Marvel Legends figure, while Basics are missing the mid-torso hinge and only have swivel hips. While these Zombie figures are basics, they still have a lot of nice movement and feel like solid, durable figures. They look great on display and are really fun to play with. Being zombies, I'm completely OK with these guys having the Basic articulation. 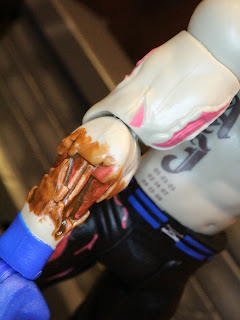 * Mattel really has made these figures far more gruesome than I would gave ever expected they would. The figures are a mixture of standard parts with appropriate zombie skin tones and newly sculpted pieces with rips, tears, and missing hunks of flesh. AJ is missing some pretty significant meat on his right bicep and forearm. The paintwork is great and really reminds me of some of McFarlane Toys' classic work. 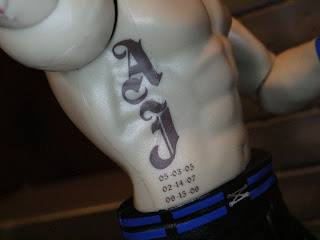 * Mattel always does a...phenomenal job with the tattoos on their WWE figures and it's cool that these zombies still get the same level of attention. AJ Styles is sporting the AJ tattoo on his right side alongside the birthdates of his three oldest children. Furthermore, the dates are fully legible. 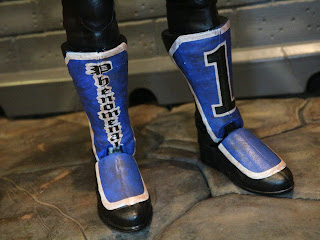 * Not only do AJ's boots feature some very neat, clean printing but they also have a really nice muddy wash on them. It's tough to see in the photo, but it's definitely there. 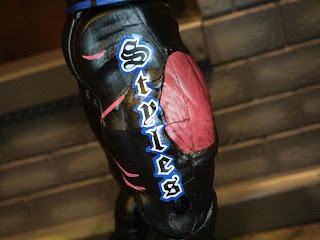 * Last, and certainly not least, is the excellent work on AJ Styles' pants. He's got some ripped up trunks and a large chunk of exposed muscle poking out through the front of his right leg. Little details like this make all of the difference in zombie figure and Mattel continues to do some excellent work here. 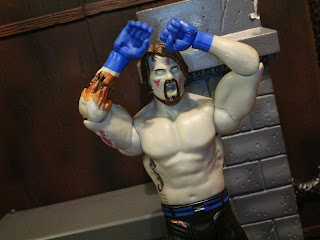 I love this series and I'm definitely enjoying messing around with them. I'm totally a mark for these, as I love both WWE and zombie action figures, so my enthusiasm certainly might be higher than yours. Still, I appreciate when a company does something unique with a property while continuing to put out plenty of quality product in its flagship lines (if Mattel were stopping the basic and Elite lines to create these, I'd be upset, too!). These are fun, creepy figures and easily worth the money. AJ Styles is a Great and a 1/2 figure and is definitely worth picking up if you're a fan.

I haven't reviewed any other AJ Styles action figures, but I have reviewed some other WWE Zombies, including: