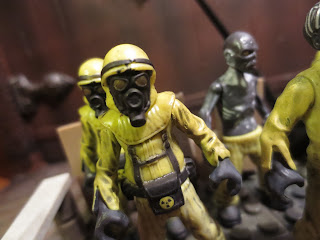 Happy Re-Halloween! While most other sites have give you 31 days filled with fright, Action Figure Barbecue goes one step further and gives you 7 extra days of terror! Today's review is a look at one more set of zombies from Mega Blocks Call of Duty line: The Hazmat Zombies Mob! This set features a variety of zombies either with charred bluish-black skin or wearing hazmat suits. Spoiler alert: The hazmat suits didn't work! Ready for a third dose of zombie terror this year? Then join me after the break... 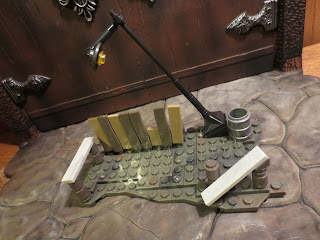 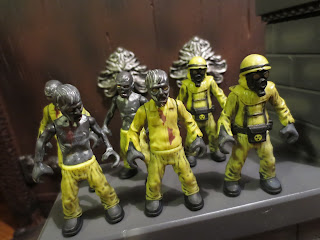 * The zombies in these sets are just great. There are 6 of them and they each stand about 2 1/8ths inches tall. Each features a swivel waist, swivel shoulders, and a balljointed head. The heads are interchangeable so you can make your own combinations if you want to. These are really high quality figures and are definitely worth picking up just for the zombies alone. 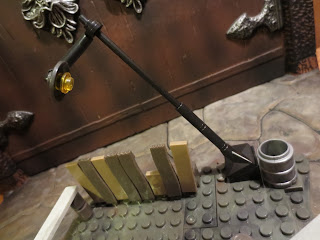 *I like the included base. It's simple but it really just gives you a nice place to display these guys. There's some railings (including a broken one), a warped fence missing a plank or two, a lamp post that's coming out of the town, and a empty jug of some kind of chemical. Mega Blocks interestingly marbles their bricks so pieces like the fence plans and the ground have a mixture of colors in them that really stand out in a positive way. 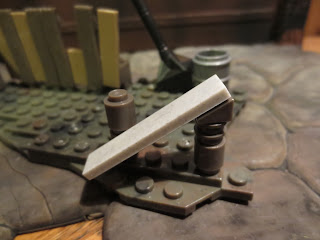 *I absolutely love the askew building techniques on this set. They're minor elements but they give the set a very broken and hazardous feel. The light post is actually built at a diagonal angle and a wedge shaped brick gives the railing a broken feel. I'd really love to see Mega blocks try some larger, more intricate builds, as they seem to have some creative ideas. 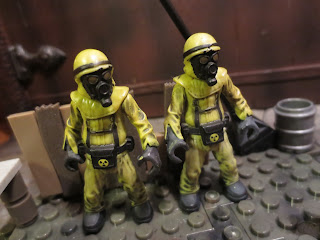 *These zombies really have some exceptional sculpting. There clothing has realistic wrinkles, their faces are terrifying, and their bodies look thin and emaciated. One of the coolest sculpts is the hazmat zombie. Check out the wear and tear on their suits, along with the various elements such as their hoods, masks, and side packs. 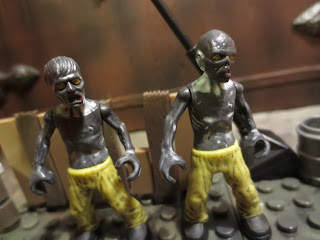 *The paint applications on these figures are really, really good. I love the washes used to bring out the details in the zombies' flesh and the darker washes that show the various grimy substances accumulated during their wandering. While McFarlane's Walking Dead building sets have better constructions, Mega Blocks has much better zombies. 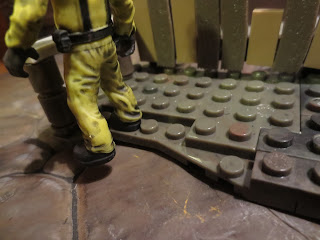 *While these figures have much better leg spacing than the previous two sets I've looked at, the design flaw that still exists is that can't stand on a single layer next to a higher layer. See the zombie in the picture? If you were to turn him with his back to the fence, he couldn't stand. The ankles aren't designed for that. It's frustrating considering that these bases don't have much space to begin with so space it at a premium for posing all of the zombies. 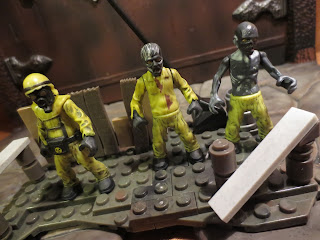 This is a cool set and another Great release from Mega Blocks. While the focus is definitely on the figures here rather than the building, these are still really cool for zombie fans. One thing I want to make sure to warn you of is that it seems that for the 2015 sets Mega Blocks has cut down on the number of zombies per set. The 2015 Hazmat Zombies Mob set is pretty much identical to this one except that it only contains four zombies! Sine you can still find this set in some stores and online for about the same price, make sure you grab this one, as the multiple zombies are the best part. Try to snag this one as soon as possible if you plan on grabbing it.
Posted by Barbecue17 at 11/01/2015