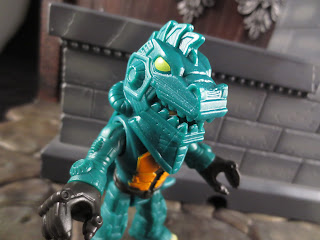 A few years back during my ThEpic Review days I wrote a review covering the xenomorphs from the first series of Kenner's Aliens line. In that review I talked about my incredibly cool friend Freddy whom I knew when I was a kid. About Freddy, I stated:
"Now Freddy was a couple of years older than me and always seemed so incredibly cool. His hair was always spiked, he always dressed as a grim reaper for Halloween, he claimed to have a black belt, he hung out at the 7-11 playing Street Fighter 2 all the time, he claimed to have read an X-Men comic that showed Wolverine naked (thinking back, not sure why that was particularly cool), and he always seemed to find cool toys first."

Today I have another Freddy story for you: Freddy was also Japanese and his family would travel to Japan every couple of years to visit family. Often, Freddy would bring back some cool toys. One time he brought back an insanely cool red and black robotic T-Rex. At some point he either sold or traded it to me (I can't remember) but a few weeks later he and his mother (who I remember rarely speaking English) showed up at our door and Freddy told me he had to get the dinosaur back. We either re-traded or he gave me some money, I can't remember which. Anyways, now with Imaginext Collectible Figures Series 6, I have a cool "Dino Mech" that no one's mother is going to come to my door and demand back! Ready for a closer look at this guy? Then join me after the break... 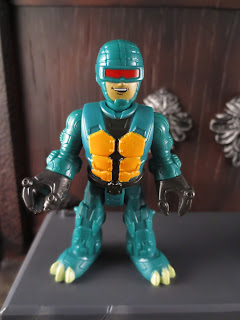 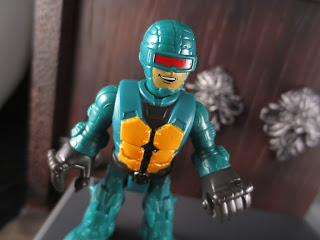 * This guy is one of the coolest Imaginext minifigures I've seen, even without the robotic dinosaur armor overlay. He has the cocky grin that you'd expect from a mech operator. Clad in a green mechanical looking suit that serves as the dinosaur body for the mech, he looks like something from a Japanese TV show or a futuristic first person shooter. 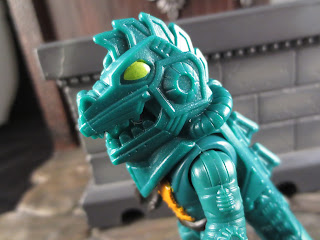 * The Dinosaur head looks awesome. It just looks like an incredibly cool robotic T-Rex that rips other mechs and/or giant monsters to shreds. I love the yellow eyes and the fact that the pilot's red visor matches up with the hollow slot in the T-Rex's mouth. I wonder if this guy breathes fire? 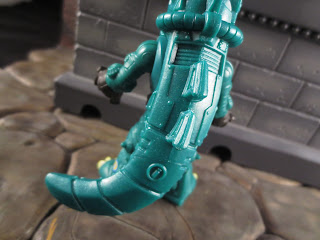 * The back of the headpiece has a giant dinosaur tail hanging down. You can really see the somewhat metallic quality of the plastic used here and it looks awesome next to all of the armored plating and the two fins on this guy's back. There's even a little Imaginext "I" logo on the tail. 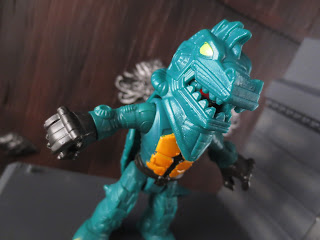 * Usually the armored pieces on the Imaginext figures fit very snugly but this guy's armor is a bit loose. Not so loose that it's going to just fall off randomly but, if a youngster were playing with it, it'd probably easily slip off. My little one really likes this guy but usually after a minute or two she's handing me the armor and just playing with the figure. I've noticed the armor and head pieces being loose on more figures in this series which is kind of a bummer. 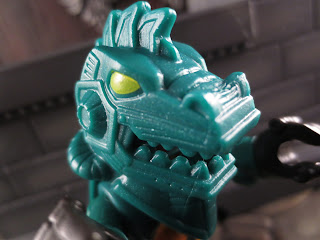 While I'm not sure that this series has any one standout figure in it that everyone on Earth must absolutely own, this guy is probably tied for the cools figure in the set (I dig the Jester, too). While it sucks that the head's a bit looser than I would have liked, the pilot is an incredibly cool minifigure on his own and, when he's equipped with the dino head, the Dino Mech is just an incredible looking toy. He's a Great addition to the line and I think I'd like to see another mech or two later down the line. That'd give him someone to battle!


I've reviewed many other Imaginext Collectible Figures, including: