Action Figure Review: The Flash from One:12 Collective DC Universe by Mezco 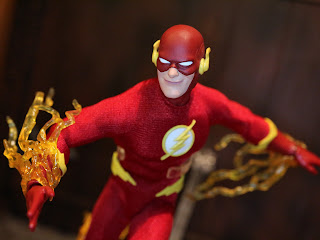 I really believe that the Super Powers versions of the Flash and Hawkman were the first two DC Comics action figure I ever owned. Sometime around 1987, when I was probably only around 4, my family attended a church that had a treasure box of goodies you could get for various accomplishments. The goodie box included various action figures (I also ended up with a boxed mail-away version of Emperor Palpatine), so you know I was hooked. Come to think of it, we lived right outside of Cincinnati, Ohio during that time, so it's possibly someone at the church worked for Kenner (headquartered in Cincinnati) and had access to promotional items and such. Anyways, I've always had an affinity for the Flash's costume and used it as an inspiration for the design of the protagonist of my 3rd grade Young Authors entry, Flamefighter! Couple my love for the Flash's costume, my love of the DC Universe, and my affinity for Mezco's One:12 Collective line and getting the Flash was inevitable. He showed up at my house on the same day as Professor Zoom with Zoom arriving a bit earlier through a different shipping company, so in that instance the bad guy won. Who will win the contest of being the better figure? Let's find out after the break... 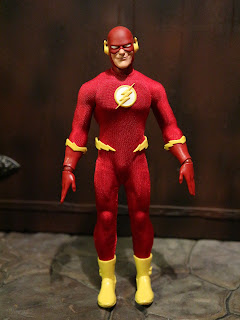 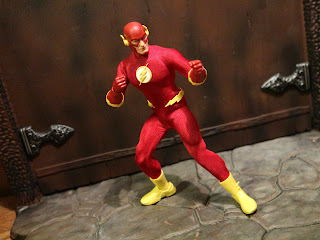 * Like most other One:12 Collective figures, Flash's articulation is phenomenal. The joints are plentiful, functional, and feel extremely sturdy. Like other characters wearing full body suits, they're also almost all hidden from view. Flash's flexible costume helps to ensure the figure has a full range of uninhibited motion and you should have no problem putting in some excellent running, jumping, and fighting poses. 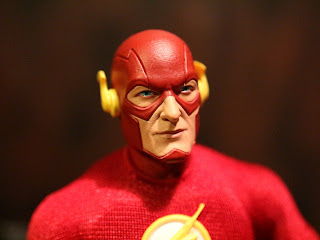 * Let's take a look at the headsculpt, as that's an area where Mezco nearly always excels. This is an awesome Bary Allen headsculpt underneath a somewhat traditional Flash hood. I like the mixture of different eras pulled together that seem to inspire the design here. It's very classic while still feeling very modern. And the work on the eyes and mouth? Exceptional. And, unlike Zoom, Flash comes with two headsculpts... 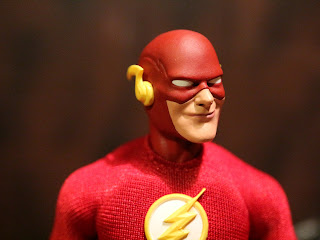 * I'm not sure that Mezco has confirmed this (maybe they have and I just can't remember) but this second portrait certainly seems to represent Wally West rather than Barry Allen. The expression seems more in line with Wally's personality. He just seems so generally gleeful and happy! I love the look here. The white eyes are also a cool touch, adding a very different look to this headsculpt. 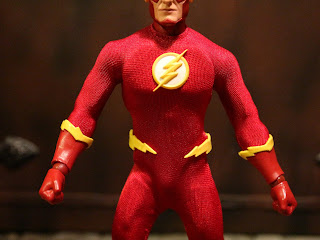 * The previously reviewed Zoom is actually the variant for Flash so, like Zoom, Flash' costume is really well done. It's rather simple, just a basic, form fitting bodysuit with a chest symbol, but the look is pretty impressive. The material looks fantastic and definitely gives the figure a vibe that is far more advanced than a Mego. It also feels like a very high quality piece, and I'm not noticing anything in the construction that causes me concern. The classic combination of red with yellow highlights just pops too, making this guy another standout figure in the line. 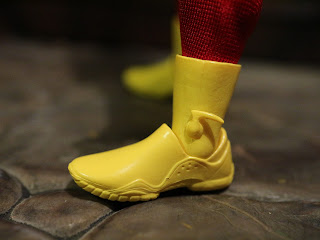 *  I want to point out two things about the Flash's boots: 1. They have a very nice range of motion, overcoming what has been one of the weaker aspects of these figures in the past. 2. The boots  have cool little bolts/ wings on the sides. 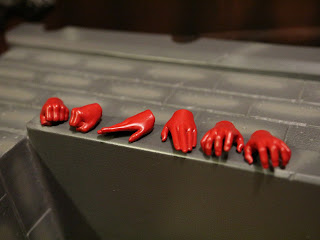 * Flash comes with three sets of hands: Grappling hands, standard fists, and some flat, open palms that look like running hands. These look great and swap out easily. It's not a ton, but it's about all a character not interacting with too many accessories needs. 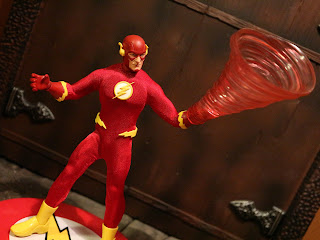 * The Flash comes with another accessory that sort of functions as a seventh hand: A tornado effect! It attaches to the wrist peg and gives the effect that Flash is creating a whirlwind with his hand. The translucent plastic looks pretty slick and I'm impressed that the figure is able to hold up this fairly hefty accessory. 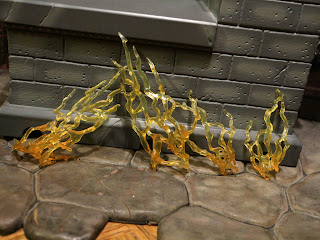 * The coolest accessory that Flash comes with is a set of four lightning bolts that can attach to his arms and legs. These are cast in a yellow translucent plastic (Zoom's are red!) and they can slide rather easily over Flash's wrists and boots. These really add to the dynamic look of this figure, making him one of the nicest looking pieces you could have on display. 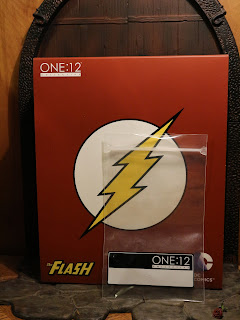 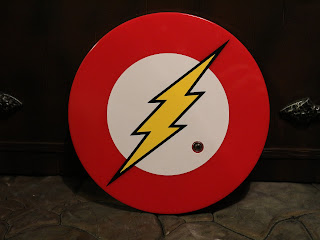 *  Like every other One:12 Collective figure, Flash comes with a personalized display stand. His is the Flash lightning bolt logo. The peg to hold the figure on the stand is positioned off center to give the figure plenty of room to stand or run. 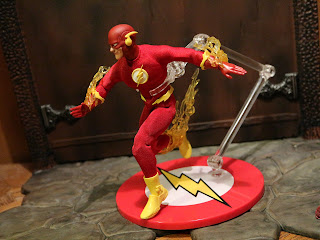 * The Flash also includes a clear plastic display arm. It can be inserted into the included display base where the foot peg is (you just have to remove the peg). You can get some great, secure poses here as the joints are very tight on the display bar and it can absolutely support the figure's weight. Running poses work great! 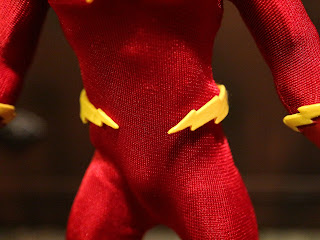 * My one complaint with Flash is the belt. He and Zoom both share this piece and there's just something about it that I find awkward. The belt is made from a harder plastic and is permanently attached to the back of the costume. It's not attached in the front, though, which is intended to help the waist articulation move more smoothly. Unfortunately, it seems like a potential breaking hazard due to the thin plastic. 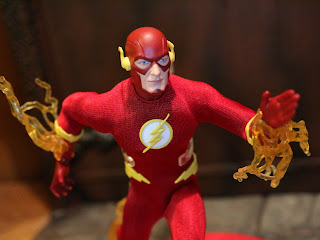 Zoom is a Great and a 1/2 figure but the Flash, with an alternate head and coming in a $5 less, is an Epic one. This is just such an incredible and well done toy. I'm not sure a better action figure of the Flash has ever been made. The recent Rebirth event in DC Comics has been huge for the Flash (all of them) and it's nice to have this guy on shelves. He's sold out at most places now so, if you want him, you need to hurry, hurry hurry! 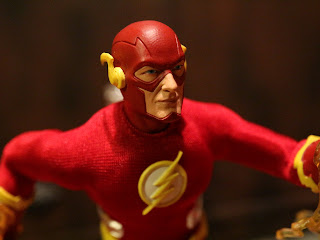