Road to Rogue One: Fight the Imperial Might from Micro Machines: Star Wars by Hasbro 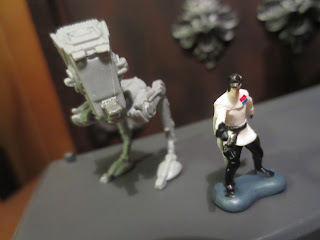 It's time for another stop on the Road to Rogue One! Today I'm looking at another set from Hasbro's revival of Star Wars Micro Machines: Fight the Imperial Might! I have to admit that I kind of like the name for this set, even if it's not really that descriptive. It sounds like something Clone Wars narrator might say at the beginning of an episode set during the Rebellion era. One of the interesting things about reviewing Rogue One stuff before the film is even released is that I'm going into these somewhat blind. While Rogue One is not nearly as mysterious as last year's The Force Awakens, there are definitely still some unanswered questions. This is another one of the larger Micro Machines packs which includes 5 vehicles and two microfigures for around $10 bucks. Of course, if you read my review of these the other day then you'll know that I picked these up for around $5 dollars because my local Wal-Mart put these on clearance rather than clearing out any older stock. Brilliant! Let's take a look at this pack after the break... 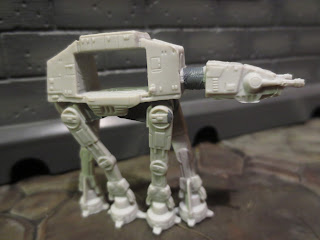 * The Assault on Scarif set also includes an AT-ACT, but this one features an open cargo bay. I like the look of this version of an Imperial Walker with the open interior. I wonder if a small ship (like a mini-rig) could land inside of there? While I like the other AT-ACT better due to the presence of the storage container, this one is much more stable. The sculpting is excellent here with plenty of sharp, clean details. 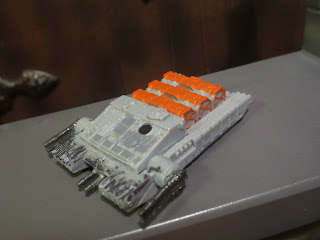 * My gosh, do I love this thing. I've already reviewed the Black Series Hovertank Pilot but it's cool to see the vehicle he pilots around. The front is really heavily armed with multiple blasters while the back looks to maybe be toting around some cargo. Are those supplies? Munitions? Portable jail cells for rebels? The sculpt and paint is quite nice on this one and, if you have any of the old Galoob stands still, there is a peg-hole on the bottom. 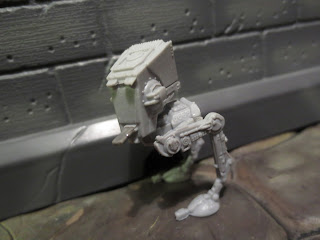 * The AT-ST is a vehicle that Galoob released many times and it was one I always found a bit problematic. It was cool that the legs swiveled but you couldn't keep that thing standing to save an Ewok. This one stands nicely, though, and it also has a swiveling cockpit. I do wish it had a few small paint apps but the sculpt does seem a bit sharper than Galoob's. I'd say that overall this one feels like a bit of an improvement which is really a pretty high compliment. 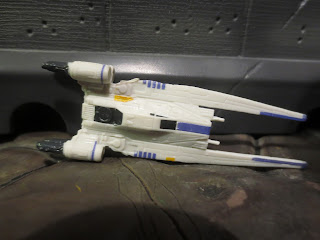 * Also known as the UT-60D, the U-Wing seems to be the ship that the main crew from Rogue One run around in. Honestly, I kind of wonder if this is the ship that gets the designation Rogue One which seems to be alluded in the trailer. It's a really nice sculpt with quite a few paint applications. Everything is neat and clean, too. It's also offered with no changes in the smaller set "High Speed Rebel Raid." 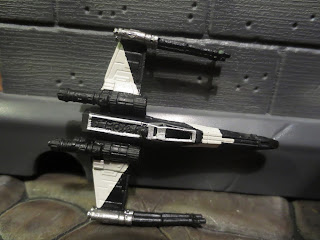 * The Assault on Scarif set had an X-Wing in this color with the S-foils open, but there it was called a Partisan X-Wing (the Partisans are Saw Gerrera's guerilla group of fighters). This one may just be a standard X-Wing as there's nothing different about it sculpt wise from any other T-65B X-Wing with the S-foils closed. The paint scheme is nice, though. 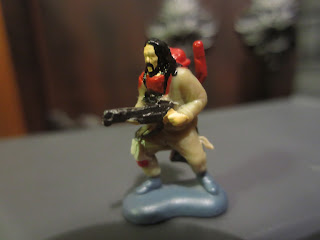 * At this point we don't know much about Baze Malbus. He joins the Rogue One crew, he's from Jedha, and he's pals with Chirrut Imwe. He also looks to be absolutely beasting that heavy repeater cannon he's toting around. The sculpt and paint on Baze is really good and he has a lot of presence as a minifigure. I love the backpack that seems to hold ammunition for his cannon! 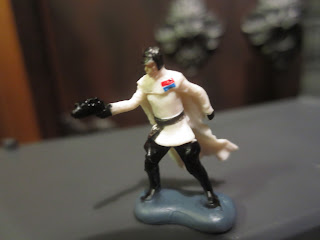 * Director Orson Krennic seems to be the primary adversary of the Rogue One's cast of rebel heroes, so it's nice that he is included in one of the sets. I like the dynamic pose and the white uniform with visible insignia. He seems to be wearing a helmet of some sort, too. I think the only white suited Imperial we've ever received in Micro Machines is Grand Admiral Thrawn from one of the old Galoob sets, so it's cool to have another. 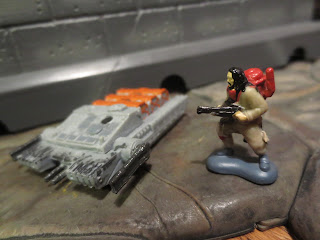 Fight the Imperial Might has a nice mixture of new vehicles with only one re-release (the AT-ST) and one repaint (the X-Wing). Both Baze Malbus and Director Krennic are stellar microfigures and the Hovertank and U-Wing both really have won me over. Getting 5 vehicles and 2 minifigures in this set isn't a bad deal at all, and this one is a Great and a 1/2 set. I'm hoping that Hasbro gets around to releasing the entire Rogue One rebel crew as, currently, only Baze and Jyn are available. Hasbro really needs to be more intentional about finishing Star Wars teams. The Disney Store Elite Series figures already have the entire crew out in two formats. What's your excuse Hasbro?

I've reviewed a number of Micro Machines on here, including sets from both Galoob and Hasbro: