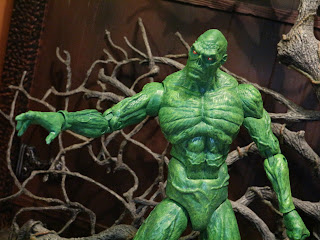 A week or so ago I read the excellent Poison Ivy: Cycle of Life and Death by Amy Chu and Clay Mann which features an appearance by Swamp Thing near the end of the book. That evening I ended up at my local comic shop and stumbled upon this new Swamp Thing action figure from DC Collectibles' DC Comic Icons line. I decided to pick him up both as I don't own a Swamp Thing action figure and this one seemed pretty cool. I had lots of Swamp Thing action figures from Kenner's cartoon based line when I was a kid, but those ended up getting sold/ traded away during my younger and dumber years. I was glad to see this guy on the shelf, particularly due to the weird place that the DC Icons line is in right now. DC Collectibles has cancelled a number of single cared upcoming figures such as Deadshot and the amazing looking Etrigan with an intention of focusing on multi-packs and diorama like two-packs. Just this past week, however, they have announced single packed releases of Batman and Superman. Does that mean good things to come with this line or does DC Collectibles just know that Supes and Batman will sell? Who knows! We'll just have to wait and see. In the meantime, let's check out this new figure of Swamp Thing, shall we? 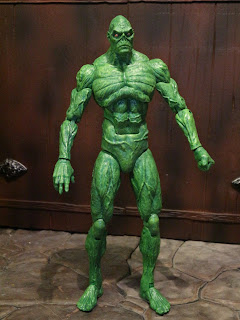 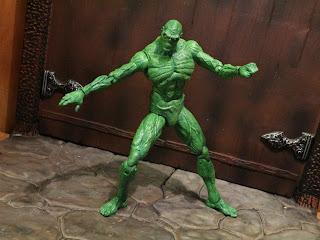 * Swamp Thing has pretty nice articulation. DC Collectibles has really upped the quality on this line and you can feel it; Swamp Thing feels like a sturdy, well made toy that you can pose over and over to your heart's content. He's also pretty tall and can fit in with some of your other DC Comics lines as well, so long as you're fine with him being the same size as other people. For Icons, he's nicely imposing, though. 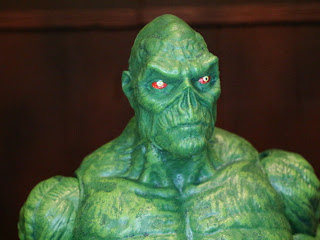 * Dr. Alec Holland definitely doesn't win in the superhero looks department, but sculptor Erick Sosa did a great job in capturing the unusual, semi-skull like appearance of the character. I love the portrait here and the eyes are really well done, too. The red and yellow are quite striking against the mostly green body. 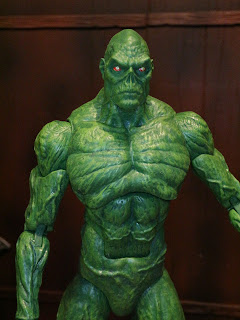 * Here's a look at Swamp Thing's entire body, giving you a chance to see the sculpting and the paintwork. While I don't think the sculpting here is as impressive as on other Swamp Thing figures due to the more consistent design that's lacking details like vines, flowers, and other unique aspects showing off Swamp Thing's organic nature, the work is still solid. The paintwork also looks really good. It kind of has a mottled appearance that adds a lot of depth to the figure's appearance. 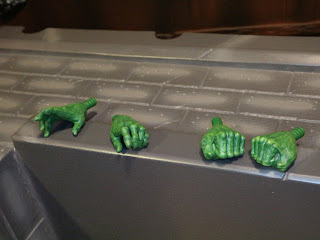 * Swamp Thing includes four interchangeable hands: A pair of fists and two expressive hands. The left hand is posed in more of a loose grip, possibly for grappling or picking up other figures, while the right hand is posed in an outstretched gesture as if Swamp Thing is communicating with plant life. I really like the gesturing hands. The hands swap in and out easily and feel very sturdy, so that's a plus. 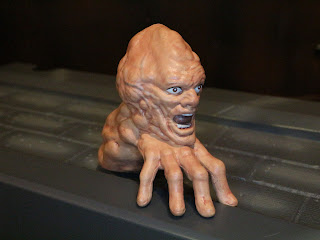 * Swamp Thing doesn't really come with any accessories ha can utilize but he does come with a minifigure of Cranius, the leader of the Un-Men. Cranius is about an inch and a half tall and is a pretty cool little extra. Essentially a brain with a face on top of a giant hand, the sculpt is kind of unsettling. Good work! 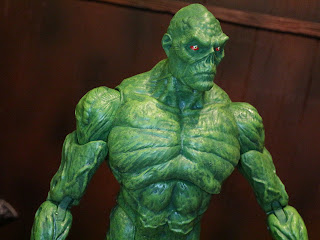 * There's something off about Swamp Thing's overall appearance. While Swamp Thing has been drawn differently many times over the years, he usually has an unusual shape to his head and neck that seems to be missing here. It's hard to describe, but it seems like something isn't quite right and I can't put a finger on it. 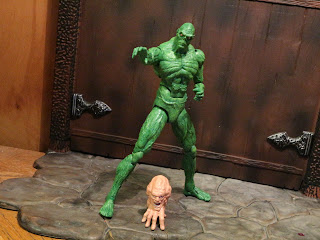 I like this figure, but I think stronger Swamp Thing figures have been released. The "bones" of the figure are all there: Solid articulation, paintwork, and sculpting, but I can't help but feel the sculpt is less interesting than it should be. The presence of one of the Un-Men helps to add some more value, though (I can see folks who missed out on Mattel's SDCC 2011 exclusive picking the set up for Cranius). Swamp Thing is a Good figure, but not one of the strongest efforts we've seen in this line or for the character.

I haven't reviewed any other Swamp Thing items but I have reviewed a few other DC Comics Icons figures, including: