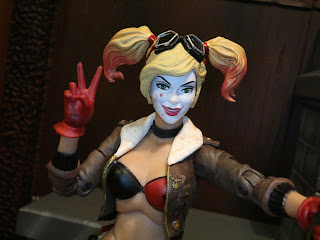 Ready for another review of a DC Comics Bombshells item? Then how about we move on to the second figure in the series: Harley Quinn! The DC Designer Series has been a pretty solid line but I definitely think the current Ant Lucia inspired subset is the best yet. Wonder Woman was incredible and folks, let me tell you, Harley might be even better. Harley Quinn was the fourth character to appear in the Bombshells statue series and she definitely represented a somewhat different style for the line; while Wonder Woman is very "true" to a classic 1940's pinup style, Harley has more elements that, to my eyes anyway, come across as more rockabilly. She's not sporting the tattoos that some of the characters have but she definitely has more of a modern feel. I'm cool with that, though, as the style and inspiration is still there. I really just dig the Bombshells aesthetic and it seems I'm not alone. Let's take a look at this insanely cool Harley Quinn figure after the break... 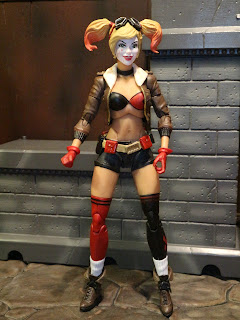 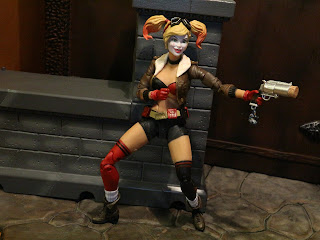 * First off, I am amazed by how much articulation this line has. It seems as good, and possibly even better, than DC Icons. At 6 5/8ths inches Harley Quinn is in scale with most of your other superhero figures (unlike Icons) and she moves as good, if not better than them. She's solid, durable, and has a pretty great range of motion. She is just so insanely fun to play with! 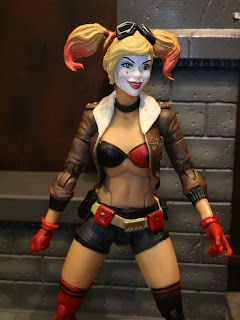 * Harley's costume is gorgeous. This is such an amazing looking figure with amazing detail and paint work. Harley's outfit is nearly identical to the costume the statue is wearing except for some colors on her belt (well, it actually looks more like she ganked Batman's utility belt) with a more interesting blend of red and black pouches. Harley's red and black bra, thigh high socks, and face paint definitely hearken back to a variety of her traditional looks but the pilot's jacket and goggles help to tie her in with the World War 2 era theme. 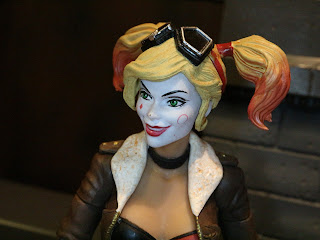 * I. Love. This. Headsculpt. Seriously, this is one of the most gorgeous headsculpts I have seen. The sculpting is so gorgeous with some really excellent work on her eyes. Plus, the goggles? Absolutely incredible. Paul Harding is an incredible sculptor and I hope DC Collectibles keeps him throughout this line. 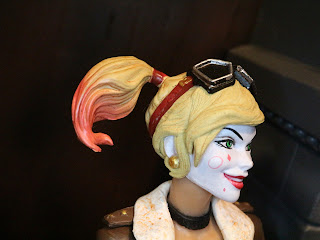 * Harley's hair looks really slick, too. It's actually cast in a softer, more pliable material that helps to give it a more realistic look. You know, the pigtails actually have a bit of bounce to them. The red tips are pretty nice as well and add a bit more pizazz to the look of the figure, who is already pretty zazzy. 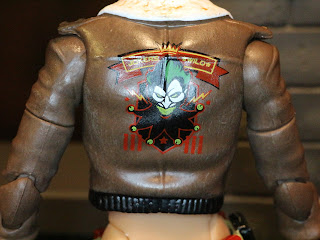 * On the back of her bomber jacket is a cool logo: An emblem of the Joker with the unit name "Joker's Wild." It's a great tampographic stamp that's applied very neat and clean. 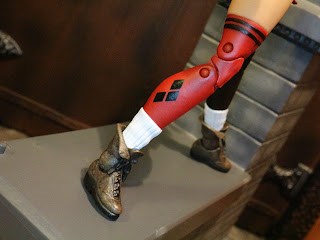 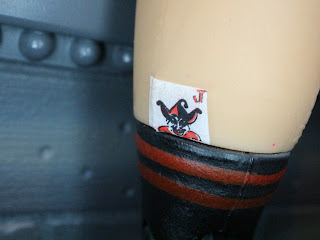 * Here's another great detail: A Joker playing card tucked into the thigh of her left stocking. Not only is this painted pretty well for such a minute detail but it's also a sculpted detail, too. 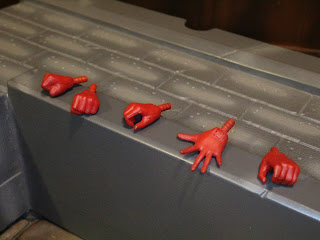 * Harley includes 6 interchangeable hands that swap in and out very easily and feel very sturdy and durable. There is a pair of fists, a right handed grip, an expressive left hand, and a right handed pistol grip. Now, you might be wondering why there are only 5 hands pictures to the left. There's a reason: The sixth hand is so cool that I want to talk about it on it's own... 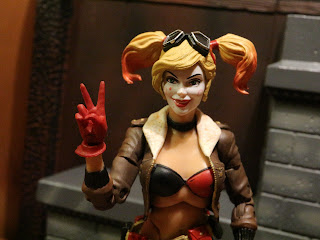 * I love this V for Victory hand. It's just so fun and expressive! Expressive hand gestures like this need to show up with action figures more often! This is way more exciting than the usual fist. 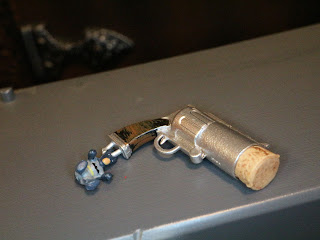 * Harley pretty much always carries a pop-gun pistol but rarely are they as detailed as this piece. The handle has a great paintjob that makes it resemble actual wood and the cork really looks like a real cork. Oh, and there is actually a little Batman charm attached to the bottom of the pistol. It's actually a separate piece and it jiggles around like it's actually clipped to the bottom of a gun as an accessory. 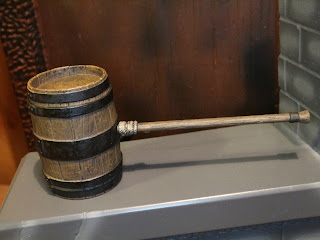 * Harley also usually includes a mallet, so she gets one here too. This has an incredible amount of intricate sculpting and paintwork. It's also really heavy. 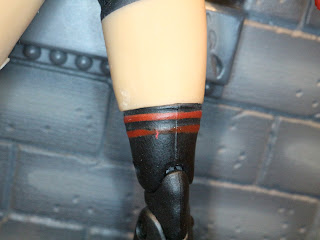 
* There are definitely a few minor paint flaws on this figure. Nothing deal breaking, but definitely some minor flaws on an otherwise perfect figure. If you get a chance make sure to inspect your figure beforehand in person. 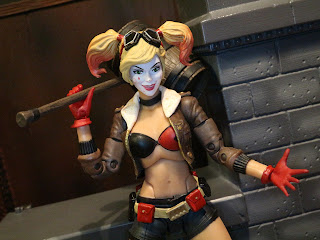 Bombshells Harley Quinn is an absolutely Epic figure. The sculpting, accessories, articulation, and most of the paintwork is absolutely incredible. I'm not saying this will be anyone's definitive Harley Quinn figure but she definitely will stand out as one of the best in any collection. DC Collectibles is doing an amazing job here and I hope they keep these coming. These are pretty special and definitely worth picking up as soon as you can; they're so fun and unique! 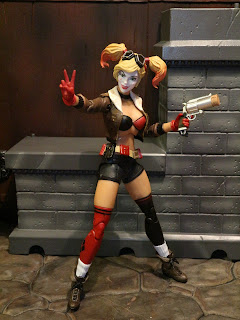 If you're looking for more Harley Quinn figures, check out the Harley Quinndex archive for a look at a bunch of them.