Action Figure Review: Rise of Evil from Masters of the Universe Origins by Mattel 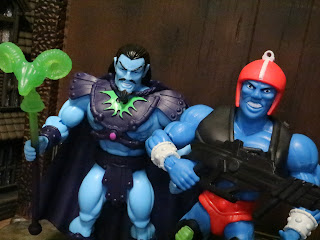 While Walmart exclusively carried the Masters of the Universe Origins line last year it's been available more widely in 2021 and Target recently got their first exclusive for the line. It was tough to come by at first but the Rise of Evil 2-pack seems to be showing up more frequently in stores over the past week or so which hopefully is a good sign that distribution is improving for Target's exclusive wares (the recently up for preorder G.I. Joe Cobra Island exclusives were more readily available, too). While Masters of the Universe Origins originally seemed like it was going to focus on the earliest minicomics and such there's definitely some 200x influence in the line, most strongly as seen in this set. The idea of Skeletor and Trap Jaw originally being Keldor and Kronis definitely comes from the 200x era (though, to be fair, the Skeletor/ Keldor connection was hinted at in a vintage minicomic) and seems to have become a pretty popular addition to MOTU lore. This is definitely one of the most desirable MOTU Origins release in my book and I'm thrilled to finally get the chance to review it. Let's take a look at two of Eternia's worst before they hit the big leagues after the break... 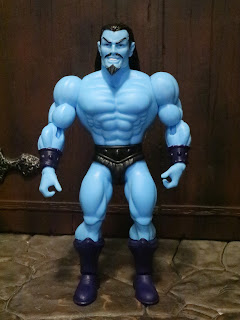 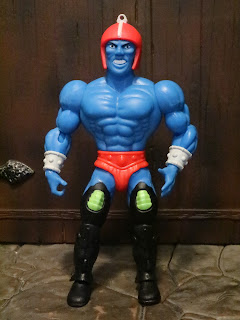 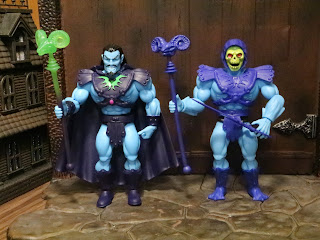 Comparison:
* Keldor is on the left while the original Origins Skeletor is on the right. While the have the same armor, Keldor does differ from Skeletor quite a bit. He has different boots, normal arms (no fins), and a completely new portrait. He also gets a cape, which is pretty slick. 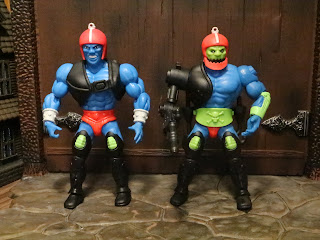 Comparison:
* Kronis is on the left while Trap Jaw is on the right. These guys are quite different, too. They really are only the same from the waist down as their arms, torsos, and heads are completely different. Kronis is just a hair taller, too. 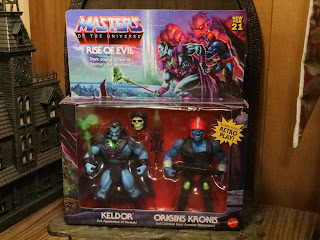 The Packaging:
* I don't usually make a big deal out of packaging but the packaging on this set is gorgeous. The MOTU Origins line just has so much beautiful artwork and I really hope they release an art book with all of it collected some day. While you'll have to cut a piece of tape and a rubber band overall the packaging is more collector friendly than most of the releases in the line. 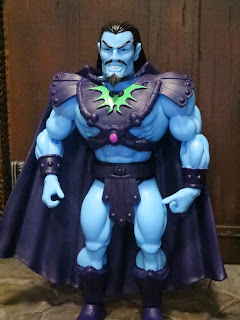 * While Keldor shares the same colors and armor as Skeletor he really does look quite different. I love the painted highlights on his chest armor as they really make him stand out from the standard figure and add a nice splash of color. He's also sporting regular arms (not the demon fins that Skeletor has) and standard boots, so he looks noticeably different from Skeletor, showing off better how much magical transformation he goes through to become the Evil Lord of Destruction. 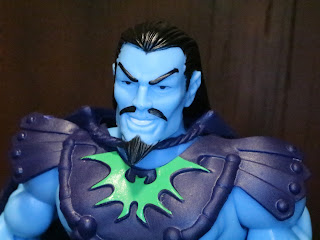 * The headsculpt is quite nice on Keldor. He's got the handsome face that sits in the middle between resembling a swashbuckling hero or a cunning villain; he looks like he could go either which is part of the tragedy of Keldor's fall. 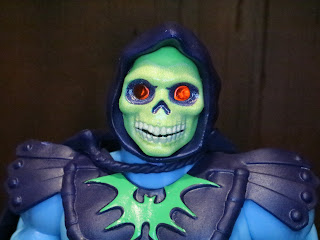 * This Alfredo Alcala styled headsculpt for Skeletor is really meant to be used with one of the other Skeletor figures rather than this body and it is an excellent inclusion. Seriously, this is amazing! Those red jewel like eyes are just so delightfully creepy, too! I guarantee there are a few folks buying this set just for this portrait. 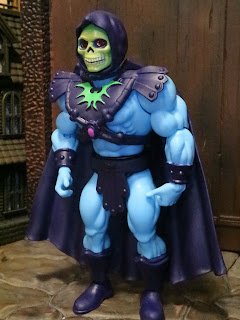 * While Keldor/ Skeletor has the same armor and belt as the previous Skeletor figures, both of which are removable, he also has a removable cape. It's a really cool piece and I think most folks will be excited to have it. It's a nice extra that will help you build your ultimate Skeletor in the Origins line! 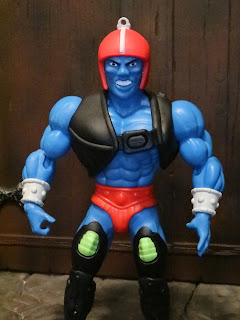 * Let's turn our attention to Kronis, the Evil Criminal from Another Dimension who eventually takes on the moniker of Trap Jaw. The packaging calls him Origins Kronis, probably due to some kind of trademark issue. He's just Kronis, though, and he looks pretty cool. The parts to turn Trap Jaw into Kronis were included with the 2010 Masters of the Universe Classics Trap Jaw figure but this is the first time we've gotten Kronis released on his own (well, as a named release) so that's kind of a big deal. From the waist down he's the same as the Origins rap Jaw but from the waist up he's different. He uses the standard torso and arms (Trap Jaw had a unique torso) augmented with a black harness. The black harness is removable and, interestingly, there are slits on the back where the Trap Jaw arm attachments could go. 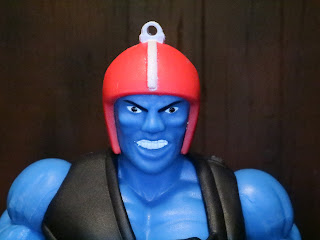 * Kronis is wearing the same distinctive helmet that he wears later as Trap Jaw but you'll notice that his face is completely different. This is what his face looks like before it's ravaged by evil magic and covered with necrotic flesh. He looks like a pretty crazy guy who would fall in with Keldor's band of baddies for sure. 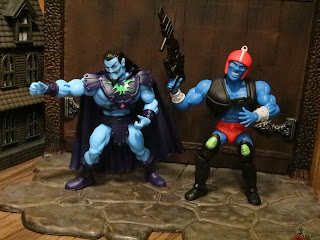 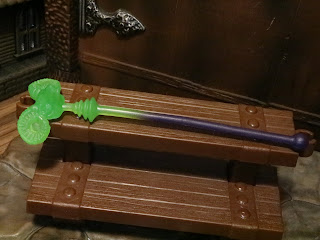 * Keldor comes with a very cool Havoc Staff that's molded in translucent green plastic at the head of the staff. It's a really neat looking accessory and something that we haven't seen before. 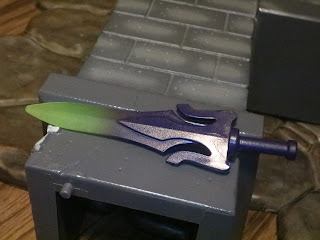 * The same goes for the purple Power Sword with a translucent green tip. The sword is the minicomic styled weapon with a super nice metallic purple paint scheme. I love it! 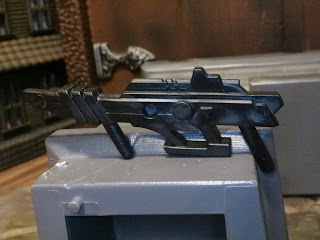 * Kronis only comes with one weapon: A laser rifle. It's a black version of the rifle that comes with the Origins Castle Grayskull which is a bit different than the vintage blaster rifle used with Grayskull and Webstor. 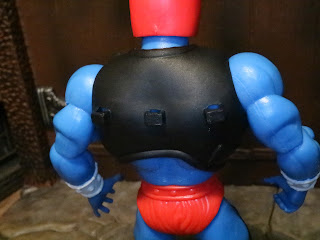 * The back of Kronis' harness/ vest has three clips for holding the alternate hands from Trap Jaw but why didn't they include something for Kronis to carry, too? It doesn't make sense and just makes him feel as if he's missing something. 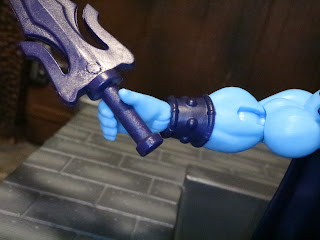 * The purple power sword is really cool but it doesn't want to stay in Keldor's hands. It tends to pop out on its own after just a few seconds. 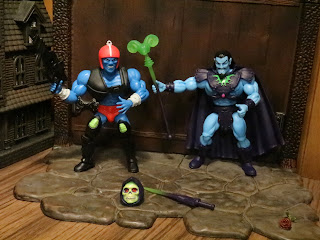 Rise of Evil turned out to be a Great set and while Keldor is the stronger figure thanks to his incredible accessories and that alternate Skeletor head, Kronis isn't a bad figure either. It's nice to see some unique figures like this in the line and while the Mastersverse line and the kid focused toyline are coming it gives me hope that Origins still has a lot of life left in it. This is one of the more exciting Origins releases of the year as fans have wanted a standalone Kronis for some time. While I would have preferred him in MOTUC, it's still nice to have him on the shelf.